Referees give their explanation of the Pats’ non-TD 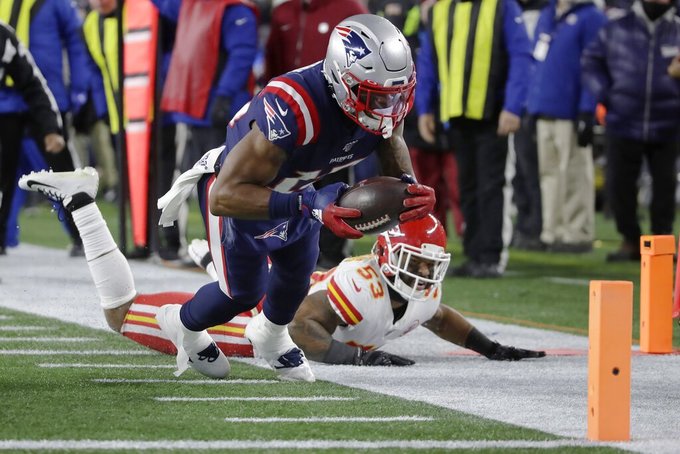 AP photo New England Patriots reciever N'Keal Harry looks to score an apparent touchdown, except officials ruled he was out of bounds in Sunday's 23-16 loss to the Kansas City Chiefs at Gillette Stadium.

FOXBOROUGH, Mass. — The 23-16 loss suffered by the New England Patriots at the hands of the Kansas City Chiefs left many questions.

Not the least of which, of course, was the the official explanation of why the Patriots weren’t given a touchdown on N’Keal Harry’s apparent fourth quarter score, and why it wasn’t reviewed.

New England was out of challenges, and the ruling was that Harry had stepped out of bounds.

“What led to it (not being a TD) was the covering official on the wing was blocked out by defenders,” referee Jerome Boger told pool reporter Mike Reiss of ESPN. “The downfield official who was on the goal line and looking back toward the field of play had that (Harry) stepped out on the 3-yard line. So, they got together and conferred on that. The final ruling was that he was out of bounds on the 3-yard line.”

Boger was then asked if he had thought about overuling both officials, calling it a touchdown, so that the play could indeed be reviewed.

“Not really,” Boger said. “Those two officials who were covering it, they look at it in real time. This case was unique in that the guy who would have ruled touchdown had him short. So maybe if the ruling official on the goal line had a touchdown, we could have gotten into that, but he thought that the guy stepped out of bounds. The goal line wasn’t in play.”

In any rate, the Patriots eventually had to settle for a field goal that brought them to within 23-16, but that’s as close as they would come.

On a controversial play just minutes earlier, Patriots cornerback Stephon Gilmore was asked if he would have scored on a fumble recovery that was blown did because it was originally ruled not a fumble but that Chiefs tight end Travis Kelce was down by contact.

“I believe in myself, so yeah,” Gilmore said. “Coach (Bill Belichick) teaches us to keep playing until you hear the whistle and that’s what I did. I heard the whistle and I was surprised. You’ve just got to live with it.”

The Kansas City Chiefs left Gillette as the AFC West champions, by virtue of their win and the Oakland Raiders lopsided loss to the Tennessee Titans.

“Yeah, that’s the first goal that you have evey season, to go in and win your division,” Chiefs quarterback Pat Mahomes said. “We play in a division with a lot of good teams that are good year-in and year-out. So to be able to have this for my second year in a row, and then even the year before when Alex (Smith) was here, it’s definitely a great accomplishment.”

And so was beating the Patriots.

“I’d be lying if I said it wasn’t a big-time win,” Chiefs safety Tyrann Mathieu said. “It’s a great team. I think everything it stands for, speaks for itself, Tom Brady, I could go on and on about him and Bill Belichick. Even when we were up 20-7, you know two possessions, in our minds, we knew that we were going to have to win in the fourth quarter playing against Tom Brady.”

The Patriots awards this week had a New Hampshire flavor as Concord’s Millie Lafontaine was named “Patriots Difference Maker of the Week”, an award that recognizes volunteers who go above and beyond to support their New England communities.

Lafontaine has been a volunteer for the last 10 years for the non profit Friends Youth Mentoring Progam, a Merrimack County program that provides boys and girls ages six to 17 with a mentor, positive role model and support advocate.

Early in the first quarter, Patriots punter Jake Bailey booted his 32nd punt of the season inside the 20, setting a franchise record….

Patriots receiver Julian Edelman has now reached the 1,000-yard receiving mark (1,010) for the third season in his career, tying him with Randy Moss and Stanley Morgan for the third most 1,000-yard seasons in Patriots history…

Harry, it was announced, had suffered a hip injury in the second half, but afterward said, “I’m fine.”….

Next up: The Patriots travel to face the 1-12 Cincinnati Bengals next Sunday at 1 p.m.