Do the Patriots have enough for the home stretch? 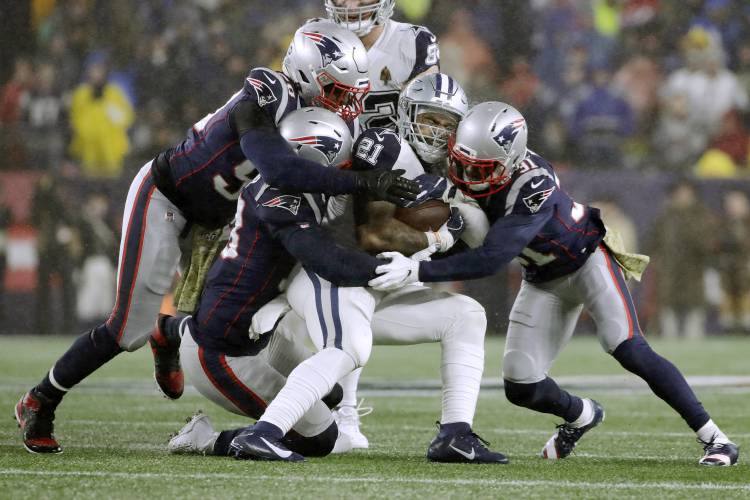 AP photo The Patriots defense, which swarmed all over Cowboys running back Ezekiel Elliott on Sunday, will be a key in this home stretch of the NFL season.

FOXBOROUGH, Mass. – The Thanksgiving holiday is almost upon us, and that means one thing:

The New England Patriots are in the home stretch, with two, maybe three challenging games left.

What should be the goal? Staying healthy? Certainly the AFC East, barring a total collapse, is a given.

It’s clear, especially if you saw what happened on Sunday: Had the 13-9 win over the Dallas Cowboys been played in Texas, the outcome might not have been the same.

Play the AFC Championship Game at Gillette. Tom Brady has now won his last 21 starts here. While the Patriot offense isn’t what it needs to be, its defense and special teams can almost make up for that in a cold, wintery atmosphere come the middle of January.

Of course it all depends on the opponent, but the likelihood is the Ravens can’t do what they did to New England earlier this month if that next meeting is on the road. We’ll possibly know more about Kansas City in another two weeks.

So are the Patriots really the leaders in the clubhouse? Most likely. Again, in the playoffs, especially the last couple of years, it comes down to stops and field position. That’s the Patriots game this year.

“It’s no secret we get every team’s best shot,” Patriots safety Devin McCourty said. “We know that….When we’ve played somebody, they’ve talked about it being a measuring stick or a big game for them. I think we realized, especially this time of year, every game is a big game.”

The caliber of opponent, it seems, doesn’t impact how prepared or how efficient the Patriots need to be.

“It doesn’t change how we prepare and how we have to execute to win,” McCourty said. “…We just have to continue to do that. It will be a tough one on the road next week against Houston.”

The next week, the next game, the Patriots never look too far ahead. As receiver Julian Edelman said, referring to the game-by-game situation, “You’ve got to stay in the moment, stay focused on what’s on your plate right now,” Edelman said.

The Patriots weaknesses are evident, but it’s up to the opposition to try to take advantage of them. Often they do not, as was evident by the Cowboys on Sunday when they abandoned what looked like a successful run game.

Meanwhile, it’s evident the Patriots go into every game with a huge advantage in the secondary, one named Stephon Gilmore. His shutdown of Dallas receiver Amari Cooper will end up on a 2019 season highlight film. Gilmore gives opposing coaches a game plan problem, and we may see that again on Sunday night when he may get assigned to cover Houston’s Deandre Hopkins.

“He’ a monster,” Edelman said. “I get to battle against him every day, and I love getting to do it because it makes me better. He’s got a knack for the ball. He’s confident. He’s got that steady mind, he’s never up, he’s never down. He barely talks. … He studies the game like I study the game. It’s unbelievable to have a teammate like him. I’m glad we have him.”

The Patriots have a lot more, but because they aren’t blowing out the opposition as the schedule has gotten tougher, there’s still unrest. Some feel the ineptititude by opposing coaches is something the Patriots feed off of, and they’re right. For example, the opposition still doesn’t realize you need touchdowns, not field goals vs. New England.

But that’s not the lone reason the Patriots are 10-1. They have talent. They survived a bad weather home game against a slightly above average team missing two valuable veteran receivers, because they made the elements work to their advantage. Basically, they are smarter than the other team, usually, and use all aspects of the game – including special teams and field position – to beat you.

“Overall Dallas was on a long field and that’s, on a night like (Sunday) night, just hard to put (a drive) together,” Patriots coach Bill Belichick said Monday during his media conference call.

Long drive, long season. The Patriots are putting a good long season together. Do they have enough to get across the finish line first?