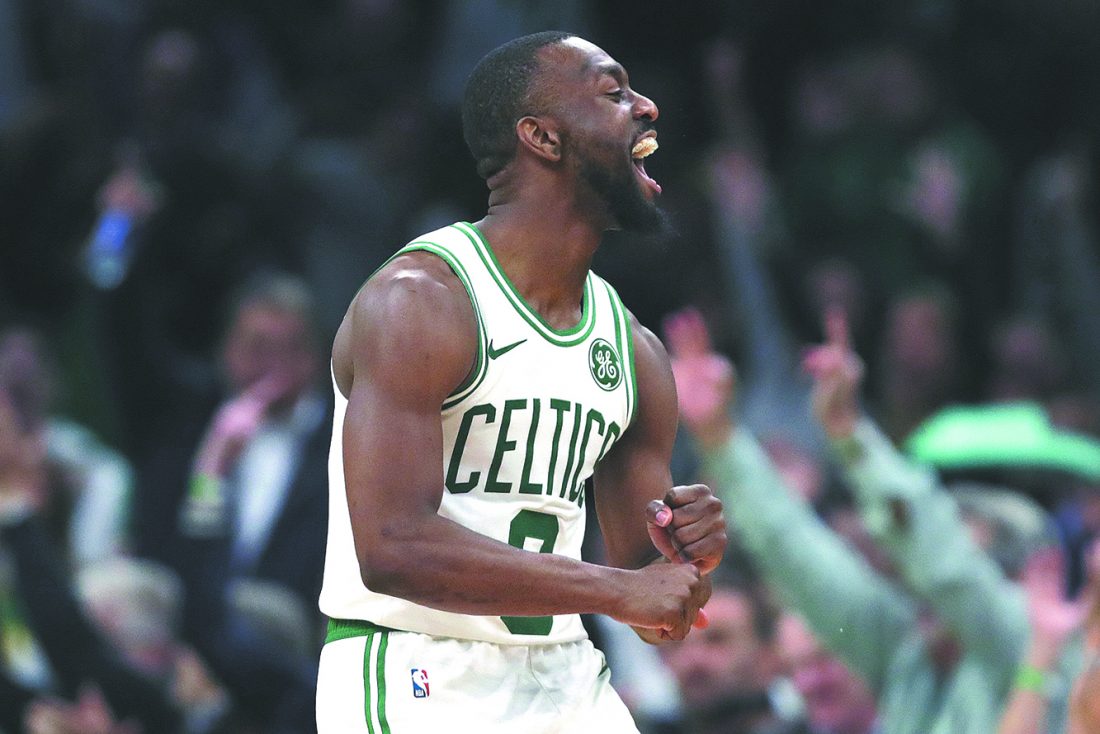 Boston Celtics guard Kemba Walker reacts after hitting a 3-pointer late in the second half of an NBA basketball game against the Dallas Mavericks in Boston, Monday, Nov. 11, 2019. The Celtics defeated the Mavericks 116-106. (AP Photo/Charles Krupa)

BOSTON (AP) – Kemba Walker made a trio of key 3-pointers in the fourth quarter and finished with 29 points, Jaylen Brown added 25 points and 11 rebounds, and Boston beat the Dallas Mavericks 116-106 Monday night in the Celtics’ first game since Gordon Hayward had surgery on his broken left hand.

Daniel Theis chipped in with 11 points and Brad Wanamaker had 10 for Boston, which won its eighth straight game since a season-opening loss at Philadelphia.

Jayson Tatum shot 1 for 18 from the field and scored only five points for the Celtics.

The Celtics released a statement during the opening quarter that said Hayward had surgery Monday to repair a fracture in his non-shooting hand. He was injured during their previous game in San Antonio when he collided with LaMarcus Aldridge as the Spurs big man set a screen.

Boston trailed by two before going on an 11-2 spurt over a 1:32 stretch to move ahead 101-94 with 4:11 to play on Walker’s 3 from the right wing. Marcus Smart then converted a three-point play for the Celtics.

Walker nailed his three big shots from beyond the arc in a span of 1:09 during the run.

Dallas took its first lead of the game, 88-86, on Tim Hardaway Jr.’s one-handed runner in the lane. The Mavs held a 92-90 edge before Walker took over.

The teams were tied at halftime before Boston opened the second half with a 15-3 surge. Smart started the run with a 3 from the right corner. Walker and Brown added 3s on consecutive

Doncic then started to take over, scoring nine of the Mavericks’ 11 points as they closed to 84-79 at the end of the third quarter.

Theis injured his right pinkie and went to the locker room early in the game. He came back to the bench and had the pinkie taped to his ring finger before going back in.

Boston jumped to an 8-0 lead and led by 10 twice — once in each quarter — during the opening half.

The Celtics honored 103-year-old Peter Fantasia, who served in World War II, on the court during a second-quarter timeout.

Mavericks: At the New York Knicks on Thursday in Porzingis’ return to Madison Square Garden against his original team.