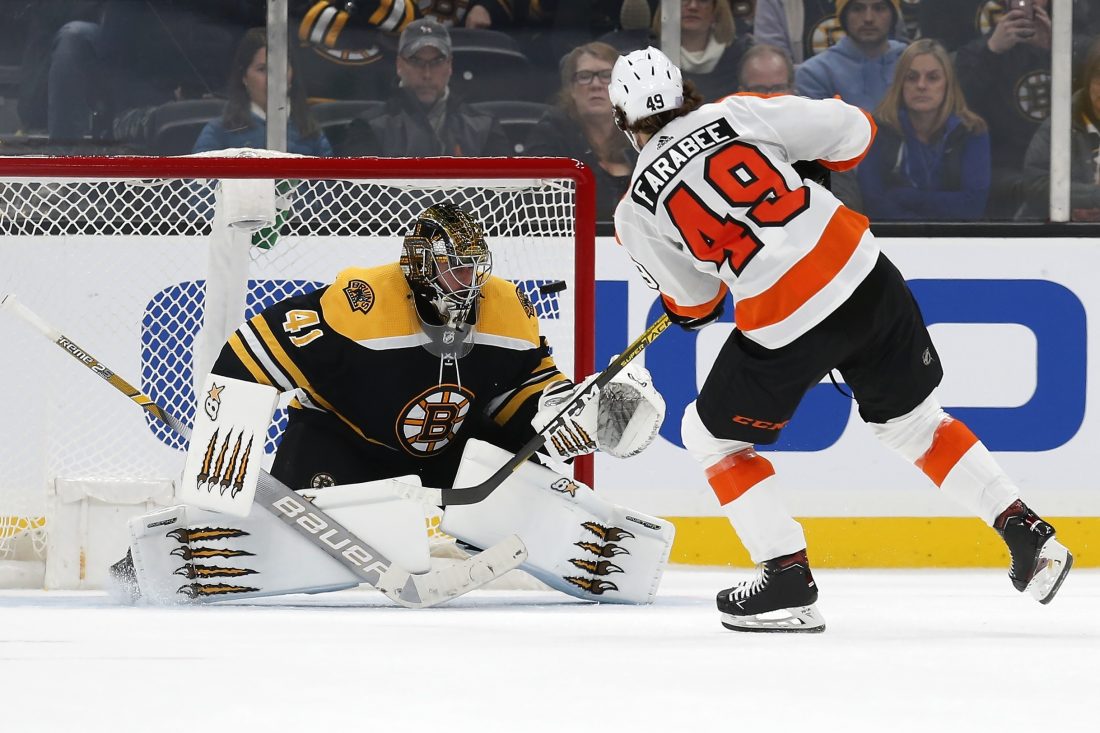 BOSTON (AP) – Joel Farabee scored in the shootout to give the Philadelphia Flyers a 3-2 win over the Boston Bruins on Sunday night.

Travis Konecny had a goal and an assist, and Phillipe Myers also scored in regulation for the Flyers. Carter Hart finished with 26 saves to help Philadelphia win its season-high fourth straight while going beyond regulation for the fifth time in six games.

Danton Heinen and Brad Marchand each had a goal and Jaroslav Halak stopped 27 shots for the Bruins, who lost their season-high third straight (0-2-1) after six-game win streak.

Konecny helped give the Flyers a 2-0 lead after one period. Sean Couturier’s initial right-circle offering was stopped by Halak, but the puck bounced off Oskar Lindblom’s skate near the crease right to a charging Konecny for the goal with 6:10 remaining.

Philadelphia outshot Boston 14-5 in the opening period on the second night of a back-to-back after Saturday’s win over the Maple Leafs.

Boston’s Par Lindholm appeared to poke in a rebound after a scramble in front of the Flyers’ net early in the second, but play had already been whistled dead. An official review upheld the call on the ice.

Following a scoreless second, Heinen’s spinning forehand shot in front of the net cut the Bruins’ deficit to 2-1 at 5:59 of the third.

Marchand beat Hart glove-side on a wrister from the left circle to tie it with 7:38 left.

Pastrnak drew a penalty shot after Ivan Provorov’s slash with 4:56 left. Hart stymied Pastrnak with a stick save to his left after Pastrnak’s slow approach and wrist shot.

Philadelphia has not won a road game in regulation against Boston since Oct. 6, 2011.

The Flyers had dropped nine of their last 11 at TD Garden.

two wins coming in overtime. … Boston is one of two teams (along with Vancouver) without a regulation home loss this season at 7-0-2. … Bruins captain Zdeno Chara was given a video tribute and ovation during a first-period stoppage in honor of the defenseman’s 1,500th NHL game Tuesday in Montreal. Chara waved to the fans as players on both benches tapped their sticks in appreciation. … Boston LW Joakim Nordstrom (infection) and Lindholm (upper body) returned after missing six and five games, respectively. LW Jake DeBrusk (lower body), RW David Backes (lower body) and RW Brett Ritchie (upper body) remained out.