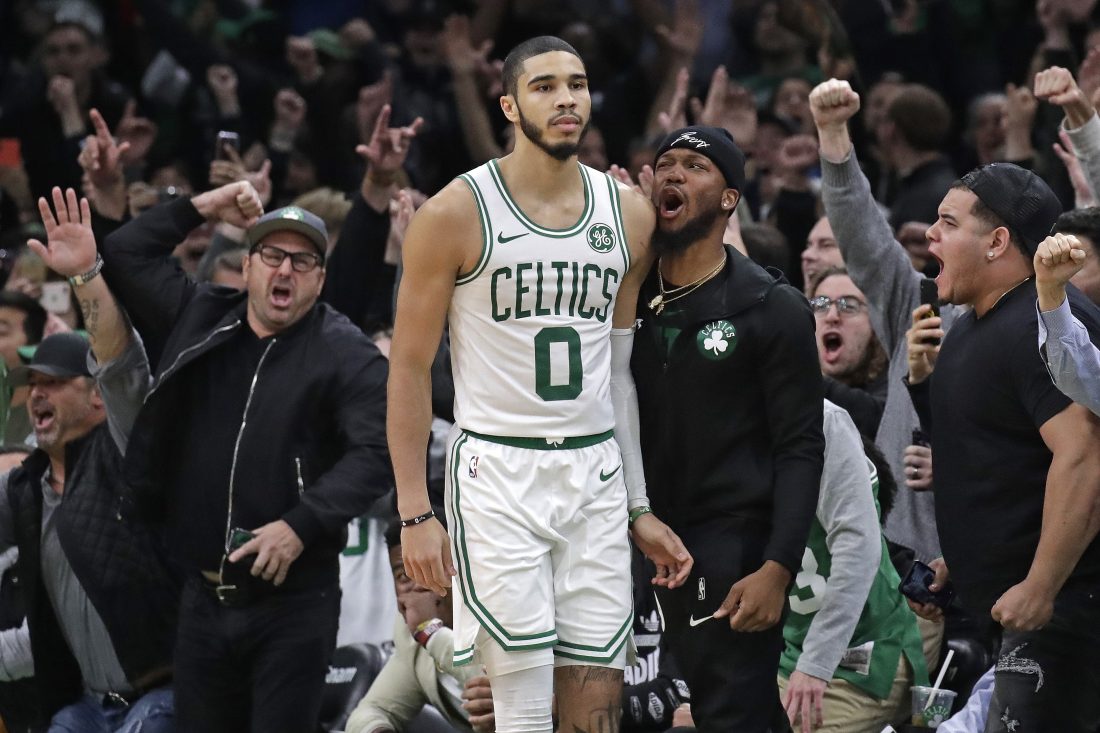 BOSTON (AP) — Jayson Tatum made a big play at a big moment for the Boston Celtics.

Then he made it sound very routine.

Tatum hit a turnaround jumper with 1.3 seconds remaining, and the Celtics beat the New York Knicks 104-102 on Friday night for their fourth straight victory.

“It feels great, but I don’t want to get too excited,” Tatum said. “The guys that I look up to in this league, they’ve do things like this all the time.”

Tatum finished with 24 points. Kemba Walker scored 23 of his 33 points in the second half, and Gordon Hayward had 13 points and nine boards.

“I’m happy we went to him,” he said. “Hopefully that keeps him confident. That can really just get something going for us. That was an unbelievable play.”

Unlike a 118-95 rout at Madison Square Garden the previous Saturday, Boston was pushed by New York until the very end of a game that featured 24 lead changes and 10 ties.

Marcus Morris, who played the last two seasons with the Celtics before signing with New York as a free agent, led the Knicks with 29 points. Morris made four foul shots in the final minute, and then hit a tying 3-pointer with 4.7 seconds left.

“We stayed locked in all game long,” said Knicks rookie RJ Barrett, who finished with 15 points and seven rebounds. “The whole fourth quarter we was fighting, and that’s the identity of our team. We did that tonight.”

After Morris’ late 3, the Celtics called timeout and Marcus Smart inbounded the ball to Tatum in the corner. He caught the pass, turned around and pulled up for a shot from the corner that was initially called a 3-pointer. It was quickly overturned during the timeout, but it didn’t matter. The Celtics broke up a long inbound pass and the Knicks didn’t get off another shot.

Morris congratulated his former teammate after the game.

“It was good to see him get his first one (game-winning shot),” Morris said. “I wish it could have been against somebody else, but hey — it’s the NBA.”

It was the third straight game with 30-plus points by Walker, who scored 32 in the previous two and finished with his best game since signing with the Celtics as a free agent.

Walker also hit all 14 of his foul shots and added five assists and six rebounds.

“We stuck with the game,” Walker said. “It came down to a last-second shot, but (we’ll) take wins any way you can get them.”

The Knicks led 50-49 at halftime and opened the third quarter with a 3-pointer by Frank Ntilikina, starting a period full of shots from beyond the arc. Both clubs hit five 3-pointers in the quarter before the Celtics carried a 75-74 lead into the fourth.

The back-and-forth continued in the final period. Boston regained the lead on a three-point play by Walker, putting the Celtics up 87-86 with 5:19 remaining.

Knicks: Bobby Portis had 13 points and seven rebounds. … Ntilikina scored 10. He started at point guard, where the Knicks were without Elfrid Payton (hamstring), Dennis Smith Jr. (death in the family) and Kadeem Allen (knee).

Celtics: At Cleveland on Tuesday night, the first of three straight on the road.