Patriots will rip opponents’ hearts out in second half 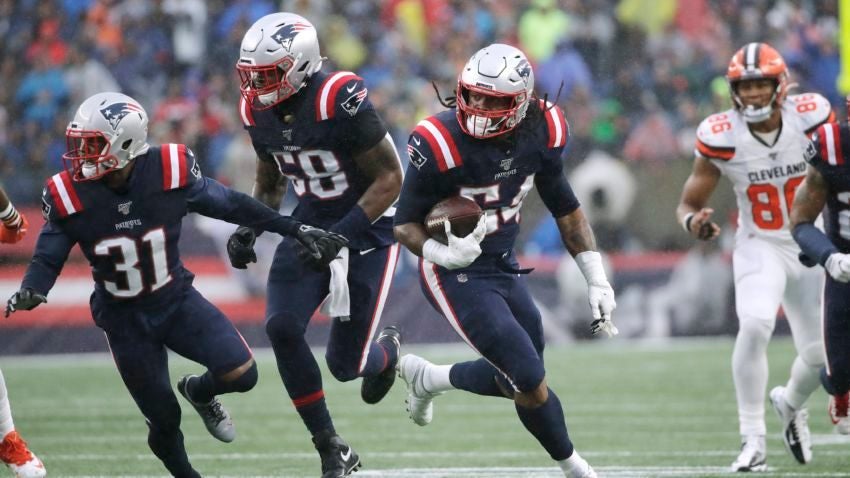 AP photo Patriots linebacker Dont'a Hightower reutrns an interception for a score during Sunday's big win over the Cleveland Browns.

FOXBOROUGH, Mass. – The team that takes away and gives hardly anything back – except to its fans – is halfway home.

The second half of the 2019 NFL season begins this week, with a trade deadline later today. It’s already been well documented how the New England Patriots are a team whose best offense right now is its defense, with 25 takeaways and the idea that the unit will set up its offense for success. Tom Brady may not like it, but that’s the way it is.

As Patriots safety Devin McCourty said, “Us turning the ball over, our offense protecting the ball, a lot of times that’s going to lead to wins. It’s rare you come out of the game plus in the turnover ratio and you lose.”

The Patriots have jumped on other teams mistakes, put them in early holes they can’t dig out of, and go on from there. They led the Cleveland Browns 17-0 on Sunday, and the Browns as some would have expected got back in the game, 17-10. But that was by point total only. Did anyone feel, with Freddie Kitchens (yes, let’s take a false start on purpose instead of taking a time out) on the opposite sideline and Baker Mayfield behind center, that the Browns would actually pose a big threat?

Now the Patriots turn the page. Their history shows us that the New England team in late December is not going to be the same one we’ve seen in late October. We’ll see if they live up to that theory in today’s deadline, although last week they made some moves to change the club on the fly already.

Why have the Patriots struggled offensively? It’s not because they don’t have Antonio Brown, folks. It’s because they have a backup (Ted Karras) at center, a journeyman pickup (Marshall Newhouse) at left tackle, and Sunday had a backup (James Ferentz) at right guard and a plethora of unknown tight ends save Ben Watson. Their first round pick of two years ago, Isaiah Wynn, is eligible to return soon off injured reserve.

That will impact any team’s offense, because games are won and lost up front – with a couple of exceptions. Sunday’s win over the Browns was one of those, as Cleveland did pretty well up front on both sides of the ball.

But when that happens, the Patriots have the luxury of a defense that rips the ball away from you, and also rips your heart out.

The Patriots, of course, have that other advantage, the one who celebrated his 300th win on Sunday in Bill Belichick. Belichick has been revered as a coach, sometimes criticized as a GM, but the fact remains the Patriots win a lot of games because they are simply smarter than the collection of players across the way.

“There’s a lot of times for us as defenders, we gout ut there and he’ll tell us like, ‘Hey, you’ve got five different options right here. Whatever you see best, by formation, by personnel, make the call.’ … He tells us as signal calleers, ‘Nine out of 10 times, I trust you’re going to make the right decision.'”

And now the second half begins,and for the second straight week, a team is coming off a bye week to face the Patriots. You can be sure Baltimore coach John Harbaugh has spent his time during the bye better than Browns head man Kitchens did his.

The factors are always the same: Depth and injuries. Do the Patriots have enough depth to make it through the long haul? It seems that they do, but if Belichick can acquire more at minimal cost, they will.

The opposition, besides AFC East near gimmes Miami and Buffalo, include the Ravens, Eagles and Texans on the road, and the Chiefs at home. More challenges, perhaps slightly better coaches.

How will these Patriost look in two months? The same in terms of style – they will be aggressive on defense and try to take what they think shouldn’t be yours.

The Patriots players know all this.They know they go into every game with a couple of big intangible advantages. Plus some mainstays. It’s no coincidence that on offense one of the Patriots’ biggest plays Sunday was a huge screen pass to James White, who should be even more of a factor in the second half.

And defensively, there’s no secret.

“We want to be aggressive on defense,” linebacker Dont’a Hightower said. “That’s just kind of our mentality. It’s worked for us so far.”

And it should work over the next eight games, but as history has shown, the Patriots will be a tad different at some point during that stretch.

As incredible as it sounds, it should make them even better. As Belichick said Monday when asked what the main reason for his defense’s success is: “Good players.”

“We have a lot of good players playing well in different combinations that work well with each other,” he addd. “It’s a good place to be.”