Sunu feels right at home after his first Patriots game 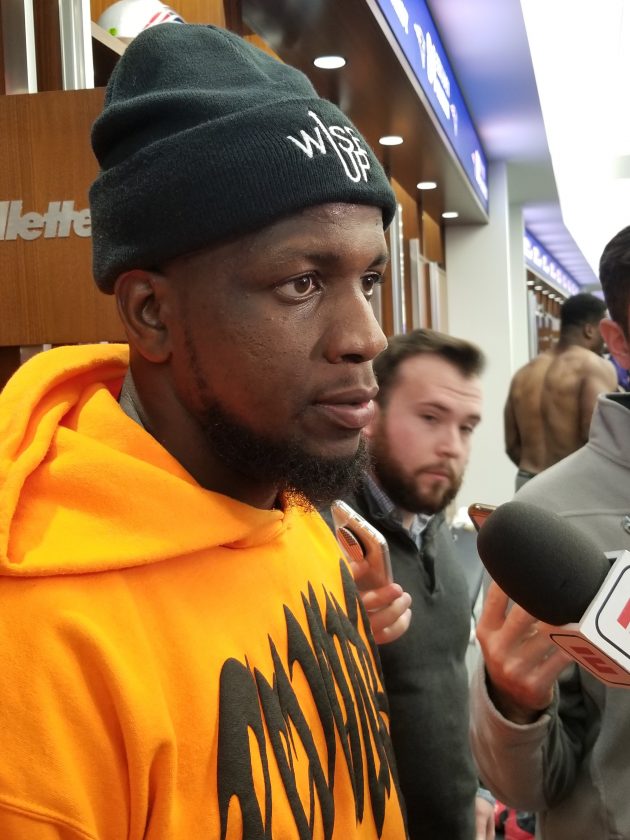 Telegraph photo by TOM KING New England Patriots receiver Mohamed Sunu talks after his first game with the team since being acquired in a trade last week.

FOXBOROUGH, Mass. — Mohamed Sanu found out Sunday just what it’s like to be a New England Patriot.

“It’s really special because you can see why they are the way they are,” said the veteran receiver, acquired last week in a trade with the Atlanta Falcons, after Sunday’s 27-13 New England Patriots win in the rain at Gillette Stadium. “You can see why they have won as much as they have. How deliberate they are at practice and the time they spend on the keys to the game.”

Defense, as usual, were the keys in this one as the Patriots had three take aways on three straight Browns plays.

“Was there like three turnovers in a row?” Sunu said. “I have never seen anything like that. It was unbelieveable.”

Sunu himself had two catches for 23 yards, including a 19-yarder that had the Patriot fans yelling “Sunuuuuuu!”.

“That started back in college,” Sunu said. “And it’s been kind of following me everywhere. I heard and I said, ‘All right, it gives me a little more juice.”

The best may be yet to come for Sun.

“When you’re a professional, you take your job seriously and you will be able to go out there and take it all in and be able to contribute,” fellow Patriots receiver Phillip Dorsett said. “He makes plays that are critical. It was the third down or the fourth down, the one that got challenged, that was a big play, and then the crossing route he caught acrosse the field, another big play. We needed him and he made it.”

“Everything we said we couldn’t do and win the game, we did,” he said. “We ran the ball well, we did exactly what we wanted to do in the run game (Nick Chubb rushed for 131 yards). That was the game plan, we did it.

“We held them, we stopped them. I thought our defense layed well enough to win. Offensively, we just can’t turn the ball over. And that was the game.”

“They’re (the Patriots) going to take advantage of stuff like (turnovers),” he said. “That’s just what kind of team (the Patriots) are. I said it earlier in the week, they’re in the right place at the right time beacause they’re a sound defense, they play with each other and they capitalize on mistakes.”

“One word? I don’t have a great vocabulary,” he said. “Extraordinary, that’s what I would say.” ….

Browns receiver Odell Beckham, Jr. on his matchup with Patriots corner Stephon Gilmore: “I think he’s an All-Pro and I think he’s everything. I just felt like we didn’t challenge as much as we could have. I think we kind of shied away from it. I was expacting and looking forward to it, but that wasn’t the case today.”

Next up for New England: at the Baltimore Ravens next Sunday night,