Pats aren’t perfect,but right now they don’t have to be 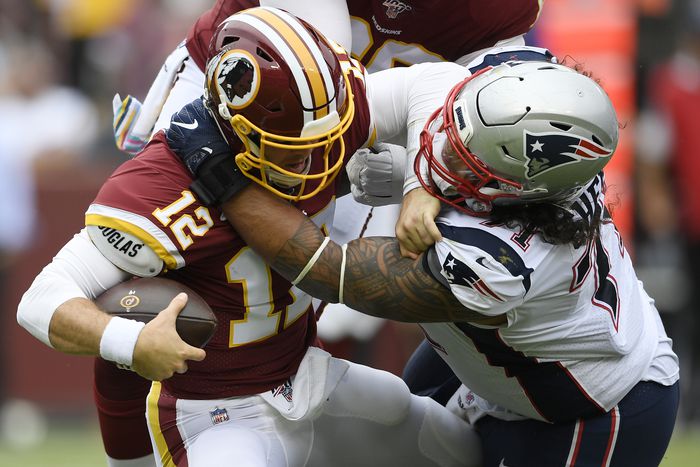 The search for perfection continues for the New England Patriots and their fans.

Not in record, of course, as they are 5-0 having beaten a stretch of teams whose combined records are

Don’t search for beauty. Search for results. This Thursday vs. the New York Giants may not be pretty, either, because Thursday Night Football rarely is. Then the Patriots have 10 days off until they face the awful Jets in a Monday Night rematch.

Welcome to the Gritty Patriots. They don’t have the depth and level of personnel to simply blow by the opposition with finesse all that often; but it’s still better than two-thirds of the NFL. Still, itt’s taken an extra level of determination, which makes you wonder how things will be when they face better teams – likely a variation of their six-point win over Buffalo, which has a tremendous defense.

There were struggles at times against the putrid Washington Redskins on Sunday, as it certainly couldn’t have been a pleasant sight to see Tom Brady running for his life early and often. It’s something you might want to expect at times, given the fact that the players the Patriots expected to be at center and left tackle, David Andrews (done for season) and Isiaiah Wynn (possible return) are on injured reserve, and a reletive unknown (Marshall Newhouse) is in at left tackle.

Brady, in his weekly Boston radio interview on Monday, praised that group up front. He better, if he wants to stay upright.

“The pass protection’s been great all season,” he said. “We’ve had a lot of moving parts at that position going back to training camp; we added a bunch of new players right after the final cut. For (line coach) Dante Scarnecchia to get all those guys together, and dealing with Isiah Wynn’s injury and David Andrews’, I’m very proud of them.

“We got the run game game going a little bit. Anytime you do that, it’s a whole different game.”

On Sunday, the Patriots switched things up at halftime and decided to go to a more straight ahead, grind it out attack with the running game the key. Sony Michel looked the best he’s looked all season, closer to his playoff self. But remember, the Washington defense made Giants backup running back Wayne Gallman look like an All-Pro just over a week ago.

The Patriots will always take what is given by the defense, but given the circumstances, if they can get back to their grinding ways of late last season, it would help take the pressure off the air attack which has had its ups and downs.

“Morale is high,” receiver Josh Gordon, who is persevering despite a couple of injuries, including a sore knee. “We’re just happy and excited our O-line is pushing downfield, our running backs are running hard. It’s good old-fashined football. If you’re a fan of the game, you love to see it.”

And right now, the players on the Patriots offense are loving what they see on the other side of the ball.

“The way our defense is playing, as long as we don’t turn it over, we know we got a great chance to win,” Brady said. “They’re playing as well as any defense I’ve ever played with. It’s really spectacular to watch from the sideline.”

Brady labeled the offense certainly as “inconsistent.” But it can overcome some of that with effort. For example, Patriots coach Bill Belichick praised Edelman during his Monday morning media conference call, calling him “one of the most competitive players I’ve ever coached.”

“He fights for every yard,” Belichick said. “He’s a competitive blocker. He’s got excellent playing strength and playes bigger than what his size is because of his leverage, pad level and overall physical and mental toughness.”

The Patriots right now will rely on their defense, their grit, their mental toughness and their football smarts/instincts. Those three alone make them better than two-thirds of the NFL, maybe more.

“We make the adjustments on the fly, and we prepare for that each week,” Gordon said. “And sometimes it works out.”

Forget the style points; things are working out according to the schedule the Patriots are currently playing. As usual, that can change in another month.

*Not including Monday Night.