Becoming an outdoors woman: The journey within 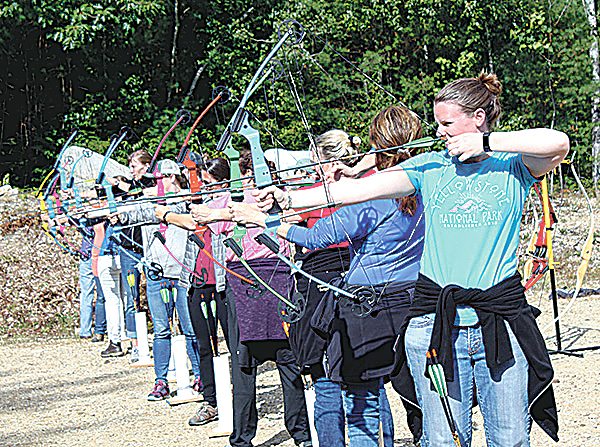 “She was like the sun. She knew her place in the world. She would shine again regardless of all the storms and changeable weather. She wouldn’t adjust her purpose to things that pass.” – Nikki Rowe

From the 1890s when pioneering women climbed the White Mountains in “proper” attire – white blouse, stylish hat, and skirts dragging in the dirt – to sweat-soaked spandex, the journey outdoors, at its best, takes us within – to places within ourselves, to inner reserves that we may not have known were there.

Today becoming an outdoors woman still demands courage, determination – and confidence! With the “proper” training, women can learn confidence by interacting with Nature – icefishing, snowshoeing and tracking, shoe and shoot, learning outdoor survival skills from building a fire or a wilderness survival kit to making a shelter, tying a fly, reading a stream or landing a fish, kayaking, paddle-boarding – all in the company of other women learning in an non-competitive atmosphere.

Such is the mission today of Becoming an Outdoors Woman a national nonprofit dedicated to offering women outdoor experiences that build outdoor survival and recreational skills while building female community.

BOW was founded in 1991 by University of Wisconsin-Stevens Point college professor Christine Thomas based on her research on why women participate in outdoor activities like hunting and fishing. Her findings? Women want to learn and get first practice with sports alongside other women in a non-competitive atmosphere, while befriending other outdoor-minded women. Since founded in Wisconsin, state BOW chapters have formed in 38 states.

Founded in 1994, New Hampshire BOW, along with all Granite State outdoors women, owe a debt of gratitude to two pioneering women who, while fighting the extra challenge of awkward garb, hiked with a bit more passion and determination 100 years ago than women need today to carve a path up a mountain. These two “trampers” – as they were called in the 1890s – went far beyond a day’s hike to envision and build an unlikely outdoor legacy that lives on today.

“In each state, the program looks different. It’s that rush of high-activity endorphins, enjoyment of nature, and sense of accomplishment that keeps bringing women back for more BOW programs. If we had more capacity, I know we could still fill up,” said Kim Proulx, BOW-NH Coordinator.

Do you want to learn the finer techniques of fly fishing – the art of casting, reading the water, picking a fly and landing a fish? Or Deer Hunting basics? Orienteering? If so, check out the wide range of BOW-NH classes on their website.

A year ago, reinforcing a national trend towards generating more female empowerment opportunities, REI initiated its Force of Nature campaign, shifting from marketing and advocacy to activism, earmarking $1 million to nonprofits helping girls and women get outdoors. Still, the reality is that lifestyle and socialization issues still make outdoor adventures and activities a more complicated endeavor for women. When interviewed about this trend in another outdoors-centric state of Minnesota, women in the outdoors industry describe the issues as “complex.”

The confidence factor has everything to do with the mind-body-emotion connection, according to Dr. Britain Scott, University of St. Thomas psychology professor: “There are still differences in the way we socialize girls and boys. Our culture continues to define femininity in ways that put women at odds with their natural self, so that it’s difficult to adhere to the feminine ideal and use your body effectively in the natural world. Kim Kardashian is no closer to a natural human who could confidently move through the outdoors than June Cleaver.”

As a case in point, when Scott asked a room full of outdoor enthusiasts how many of them owned shoes that would make it “impossible to run or climb,” every woman raised a hand. And what about the outdoors “look” – does sweaty, dirty, less-groomed, or messy hair reflect masculine or feminine ideals? It is still an uneven playing field outdoors for women. It’s not just the beauty ideal that is challenged, but the time constraints.

Two-time gold medal champion competitive ice climber Kendra Stritch, 35, of Stillwater, Minnesota, observed that while recreational interest among outdoors women is growing, societal constraints have not caught up. Stritch: “Women have more time constraints; they’re expected to do child care on top of having careers, while it’s a common attitude that guys need time to do their thing. These are the same inequities our larger society deals with.”

BOW activities not only teach women self-reliance in the outdoors, they build community with other outdoors-minded women. Stritch, used to being a lone female competitor with virtually no female comrades, hesitated to teach an all-woman class – but then found it most rewarding because she befriended a whole community of like-minded women.

Fundamentally, BOW is about helping women challenge their own expectations of themselves – whether they are learning to maneuver a paddle board, learn kayak fishing, snowshoeing or deer hunting. Interaction with Nature – just being outdoors – challenges a woman to connect with her body, and learn new pathways of autonomy and self-reliance – messages that are often opposite from those conveyed by society, tradition and the media.

Alyce Kuenzli, 30, a Minneapolis Outward Bound guide who founded the Source for Confidence adventure program for women, paddled the length of the Mississippi River. She credits YMCA Camp Menogyn and her mother’s strong role model for her adventurous spirit. “Menogyn was an incredibly powerful experience. Before I went – I was 16 – I’d never met another woman who wasn’t constantly talking negatively about her body.”

Nikki Rowe describes the ideal “wild” woman that may seem purely theoretical but still speaks to the “wild woman” seed in every woman. Being outdoors can help us get there – to that place inside where the spirit just “is.” Rowe: “Wild women are an unexplainable spark of life. They ooze freedom and seek awareness. They belong to nobody but themselves yet give a piece of who they are to everyone they meet. If you have met one, hold on to her, she’ll allow you into her chaos but she’ll also show you her magic.”

CENTER HARBOR – It is true that you can have too much snow. That is if you are a Corgi and you want to keep up ...

Working across the aisle

Last week, I was proud to help pass bipartisan legislation in the House to stop Secretary of Education Betsy DeVos ...

It’s been turned into a farce

WASHINGTON – Chief Justice John Roberts, presiding over the impeachment trial of President Trump, is supposed to ...

Trump will be greeted as hero

WASHINGTON – History is being made on Capitol Hill this week. No, I’m not talking about the presidential ...