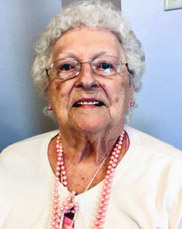 Doris C. (Buzzell) Gagnon, 94, formerly of Hudson, widow of Leo M. Gagnon, passed away Sunday morning, November 3, 2019 at American House in Keene after a brief illness. She was surrounded by family and many of the Staff at American House whom she also considered family for the past 4 years.

Mrs. Gagnon was born in Greenville, New Hampshire on November 8, 1924, a daughter of the late Elmer and Corinne (Duval) Buzzell.

A resident of Nashua and Hudson for over 68 years, Doris had been employed in the scribing and inspection departments of Sprague Electric Company for over 30 years.

Doris was a longtime communicant of St. John The Evangelist Church in Hudson and held membership in the Disabled American Veterans Auxiliary.

She was a beautiful lady whose greatest gift in life was her warm smile, cheerful ways, and lovely singing voice. She dearly loved her children, grandchildren and great grandchildren. Her smile warmed many hearts and her passion to sing will long be remembered, especially by the Staff and Residents at American House, as she greeted them many early mornings over their communication system by singing “You are my Sunshine”.

In addition to her parents, Doris was predeceased by her husband Leo, who passed away in 2002. They were married on Columbus Day of 1943 and shared 59 years together. She was also predeceased by her brother and sister-in-law, Wilfred and Helen Buzzell; and her sisters and brothers-in-law, Beatrice and Maurice Langelier and Rita and Raymond Bougie.

Members of her family include her son and daughter-in-law, Allen L. and Mary Jane Gagnon of The Villages, FL; her daughter and son-in-law, Susan and David Lougee of Jaffrey; two grandchildren, Steven Gagnon and his wife Trisha of Hudson, and Sarah (Gagnon) Madsen and her husband Mark of Hooksett; four great-grandchildren, Kyle and Dylan Gagnon, and Emma and Mitchell Madsen; her sister, Helen St. Onge widow of Theodore St. Onge of Londonderry; her niece, Sally (Duquette) Durand of Hudson with whom she sang in a Nashua chorale group for several years as well as several other nieces and nephews.

There are no calling hours. A private Graveside Service will be held for the family.

In lieu of contributions, please remember in life to share a smile and a song to those in need.