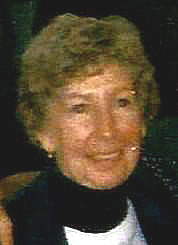 She was born on May 28, 1932 in Danvers, Massachusetts, the daughter of Earl Smith and Hulda (Ostrand) Smith. Ann was raised and educated in Danvers.

Ann had been a resident of Mont Vernon since 1975 and previously lived in Milford, NH. Through the years, she enjoyed gardening, camping, waterskiing, and was a lover of animals, especially her birds. At the age of 72, Ann fulfilled her lifelong dream of parachuting from an airplane in honor of her beloved brother, Frederick, a paratrooper in WWII, who died while serving our country. Ann was a sweet and thoughtful woman whose quiet presence allowed her to be a great observer. Oftentimes she would sit back and, with her quick wit, make a smart and thoughtful comment surprising everyone. She was quiet, but she didn’t miss a trick and was sharp as a tack.

She was predeceased by her first husband, Roland H. Lawrence, and her second husband, Fred C. Reed; two daughters, Valerie Lawrence and Patricia Vasta; and a grandson, Nicholas Lawrence.

There are no visiting hours. A private graveside service will be held in Greenlawn Cemetery, Mont Vernon, NH.  In lieu of flowers, donations in her memory may be made to Home, Health and Hospice, 7 Executive Drive, Merrimack, NH  03054 or Alzheimer’s Association, Massachusetts/New Hampshire Chapter, 480 Pleasant Street, Watertown, MA  02472. Arrangements are in the care of Smith & Heald Funeral Home, 63 Elm Street, Milford.  To share a memory or offer a condolence, please go to www.smith-heald.com.