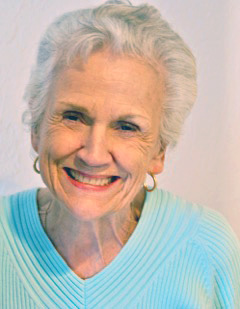 Ann Carner Wheeler, nee Baker, former long-time resident of New Hampshire and Florida, died quietly in her sleep in Sarasota, FL, on 08 October 2019. She was ninety-three years old. Attending her were her husband, Dr. Edward Wheeler, and the caregiving staff of the Glenridge on Palmer Ranch, where the Wheelers have lived for nine years.

Born on 09 February 1926, in Richmond, VA, to Frank and Helen Baker, Ann was the youngest of three children, with siblings Jack and Helen. Their family eventually moved to Troy, NY. Ann grew up-a real tomboy-on the Hudson River, and once swam two miles, cross-current, to the far bank and back, on a dare.

At Lansingburgh High School, Ann was a smart and popular student, who fancied H. Arthur “Art” Carner, Jr. He was destined to become a pioneering aeronautical engineer. They eloped to Las Vegas, NV, and moved on to Lancaster, CA, in the Mojave Desert, where they both worked for NACA at Edwards Air Force Base during the Right Stuff Era.

In 1951, Ann and Art moved to Long Island, NY, where she gave birth to a son and a daughter. Seven years later, they purchased a derelict, 19C farm atop Jeremy Hill in Pelham, NH, where they designed and began to build their new house. For six years, they worked side-by-side, clearing land, pouring concrete, putting a roof over their heads. Art died tragically in 1964.

The family moved to a suburban neighborhood in Hudson, NH, until both kids graduated from Alvirne High School and entered college. Ann then purchased and renovated a big fixer-upper in the north end of Nashua, NH.

During that time, she was executive secretary, then registrar, and later director of the Nashua Arts and Science Center, and promoted art classes, gallery openings, fundraisers, and block parties for all ages and cultures around the city. She was renowned for her interior decoration; she made beautiful stained-glass panels and windows. Around her Thanksgiving tables were elderly artists and young musicians, students and teachers, homeless individuals and single moms. Ann put her children-debt-free-through Dartmouth and Mount Holyoke. She embraced life, travelled to Greece, toured Italy, enjoyed the Caribbean.

As luck would have it, she met Dr. Edward L. Wheeler, a retired dentist, Army veteran, and widower from Lynn, MA. They married in 1992. “He was worth the wait,” Ann declared many times, “Ed is the love of my life.”

Together-while in their 70s-they constructed their dream house on Thorndike Pond, in Jaffrey, NH, and built massive stone walls against the hillside. She gardened the steep slope; he built her a potting shed. They enjoyed their grandchildren, and idled around the lake in a classic motorboat. One decade ago, the habitual snowbirds, who wintered every year on Siesta Key’s Crescent Beach, moved permanently to Sarasota.

In addition to her husband, Ann is survived by her children, Charles Carner of New York City and Jodi Carner-Higgins of Francestown, NH., their spouses Cynthia Round and Stephen Higgins, and their daughters, Carner Round of Denver, CO, and Megan Higgins of Roslindale, MA. Friends and family wishing to honor Ann are encouraged to make donations in her name to the Alzheimer’s Foundation of America.