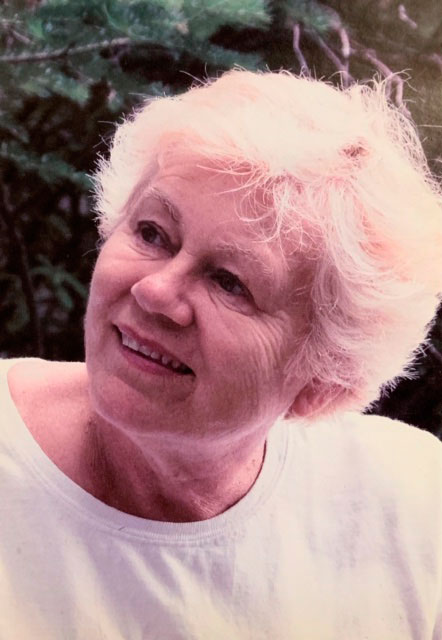 She was educated in Catholic schools, first the Ursuline sisters in Wilmington followed by high school at Marymount in Tarrytown, NY and Rosemont College in Philadelphia. She was also a great supporter of Mt. St. Mary High School in Nashua, attended by all three of her daughters.

Jackie met her husband Peter in Beacon Hill in 1963 just after college. About a year later, they married in Wilmington, Delaware. The move was made to an old farmhouse in New Hampshire just in time for the arrival of their first child in 1964. Ever since then, Jackie has happily called Merrimack home and spent many happy and productive years, serving as a town councilor for several years and as an active volunteer with the Parks and Rec Department, where her most notable contribution was the development of a large piece of donated land into Watson Park. Jackie also volunteered for many years as “Mrs. Claus” with great good humor and was even the Easter Bunny at the egg hunt in the spring.

Jackie also served for a time in the New Hampshire State Legislature. She was an avid and active Democrat and well-known for participating in everything from coffees for candidates for state offices, to hosting presidential candidates overnight. She was awarded the Paul Harris Fellow Award by the Merrimack Rotary Club in recognition of her devotion to community service.

Jackie is survived by her devoted husband, Peter; daughter Jessica Leitz and husband Chris of Melrose, MA; daughter Susan McLaughlin and husband Chuck of Kennebunkport, Maine; daughter Deborah and husband Sergey Sevastyanov of Melrose MA, son Nicholas of Merrimack, and grandchildren Keegan, Nils and Duncan Leitz; Clare and Aidan McLaughlin; and Peter and Alexander (Sasha) Sevastyanov. Jackie was predeceased by her brother, James E. Booge III. Special mention also must be made of her brother in law, David J. Flood, and nieces and nephews, and her closest friends from early childhood with whom she shared a rare bond: Gail, JoEllen, Aline, Kay and Ginny.

All who loved and admired Jackie are welcome to join the family at the Bedford Village Inn Great Hall, on Thursday, October 10 between 4:00 and 8:00 pm to celebrate her life.

Memorial donations in Jackie’s honor may be made to the Merrimack Rotary Scholarship Fund PO Box 181 Merrimack, NH.