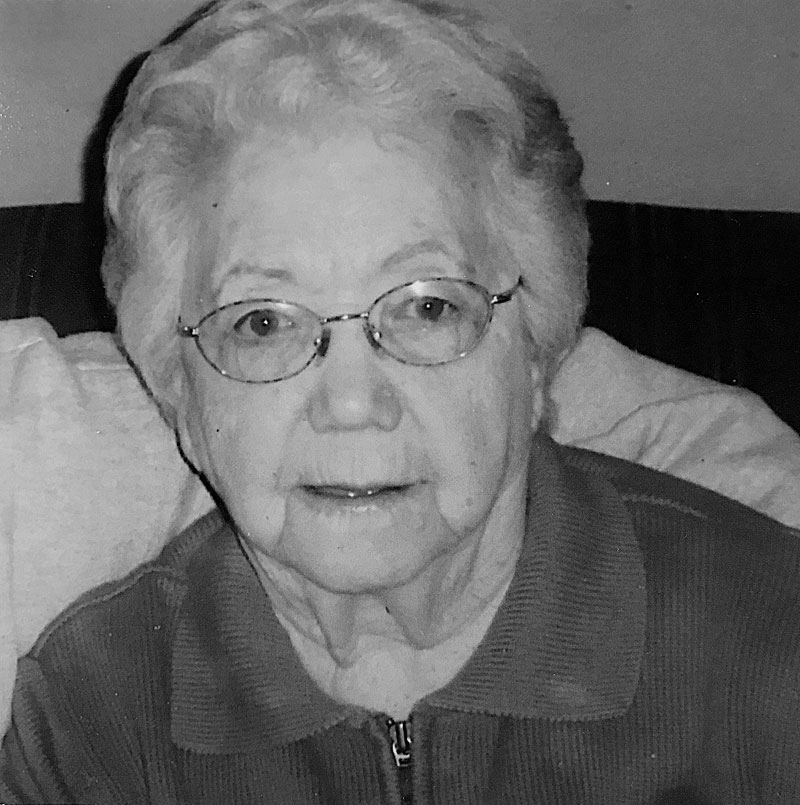 She was born in Prince Edward Island, Canada on July 31, 1919, daughter of the late Frederick and Harriet ( Cotton) Ladner. She was the last surviving sibling of ten children.

Vivian moved to Nashua in the late 1920’s and was raised by her aunt and uncle, Bernard and Ann Butterfied, following the death of her parents. She was educated in Nashua Schools graduating from Nashua High School. After graduation, she was a valued employee with Sprague Electric, JJ Newberry and Fashion Neckware.

Vivian and her husband, Harold “Pink” Moore, were married on July 20th, 1942 and together they had three children; Bernard and Sarsha Moore and Brenda and Russell Gora of Hudson, NH and Betty and Bruce Einsidler-Moore of Milford, NH. She was also the proud and loving grandmother to Geoff, Brian, Andy, Chelsea and Emily as well as twelve great-grandchildren; Chloe, Kate, Sydney, Avery, Pyper, Jordan, Kyle, Mia, Morgan, Mikalea, Keaton and Ruby.

Vivian and Harold made their loving home in Hudson and enjoyed 66 years together before Harold’s death on July 14, 2008. Before and during retirement, Vivian and Harold often spent most of their weekends setting up at Flea Markets in Hollis and Derry, NH selling various goods. She was also actively involved in the Hudson Fort Nightly, Wattannick Grange, Hudson VFW Aux 5791, Hudson Baptist Church, Hudson Historical Society and the Hudson Seniors.

Vivian enjoyed living the past seven years at Fairview Nursing Home where she was known to participate in the daily entertainment activities and often dominated the Bingo tables. She was loved by all and will greatly be missed.

SERVICES: Visitation will be held at Davis Funeral Home, One Lock Street in Nashua on Wednesday, September 18, 2019 from 11am to 1pm. A funeral service will immediately follow visitation, 1pm, at the Funeral Home. Interment will follow at Westview Cemetery in Hudson. Family and friends are respectfully invited to attend. An online guest book is available at www.davisfuneralhomenh.com, (603-883-3401) “ONE MEMORY LIGHTS ANOTHER”.