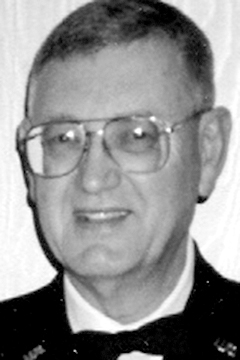 Colonel Monteforte proudly served with the Army for 33 years, retiring in 2000. He was deployed to Sarajevo, Egypt, England and Germany. Nick was also a practicing lawyer for many years and served as Deputy Attorney General in New Jersey. He was a member of the American Bar Association, and licensed in Massachusetts and New Jersey.

Nick moved to Nashua from Florida with his wife, Cathy, so the two could be closer to skiing, hiking and the cold weather that Nick loved. He single-handedly renovated their house, and his garage was filled with tools, saws, and scrap wood that he found a use for in the vineyard he built outside. In his down time, Nick was a crossword puzzle aficionado, made his own cards to send on special occasions, loved a good cigar and German beer, and was famous for his delicious meatballs and spaghetti sauce.

In their retirement years, Nick and Cathy traveled extensively, choosing the military cargo planes to cross the Atlantic before winding their way through the back roads of their favorite European countries. Nick researched his family history and connected with his roots in Naples, Italy; took Cathy on an extensive Baltic cruise and tour for her birthday, and spoke fluent German with old friends in Bavaria, to name just a few of their overseas trips. One of their happiest trips was when Nick and Cathy found both their families in Poland, some of whom had survived the Great War and World War II, and lived only a few miles apart.

Nick loved the opera, his favorite souvenir was a new hat from each country, had a great sense of humor and lived his life by a “lock and load” attitude. He could tell stories with the best of them, and laughter was his good friend. He will be missed.

Members of his family include his beloved wife of 23 years, Catherine “Cathy” Wojtkun of Nashua; four daughters, Susan Linkoski, Lauren and Katherine Monteforte, the late Janice Monteforte; two step-children, Jonathan Wojtkun and Lauren Wojtkun; a brother Gary Monteforte; a sister, Hedviga; also grandchildren, nieces and nephews. Nick was especially close to his granddaughter, Paige, with whom he was rung aboard the Constitution in Boston Harbor where the ship’s flag was raised and lowered and presented to Paige.

There are no calling hours. A Graveside service and Army Honors will be conducted at the New Hampshire State Veterans Cemetery, 110 Daniel Webster Highway in Boscawen, Tuesday, July 23rd at 11:30 a.m. The NH Patriot Guard will escort the cortege. In lieu of flowers, donations may be made in Nick’s memory to the New Hampshire Veterans Home, 139 Winter Street, Tilton, NH 03276 or the Wounded Warriors Project, P.O. Box 758517, Topeka, KS 66675-8517.