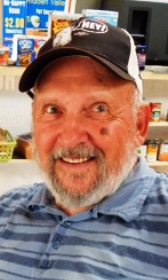 NASHUA- Paul A. Theriault, 78, of Hudson and formerly of Nashua, passed away with his family at his side on Thursday, March 15, 2018.

Paul was born in Nashua on April 28, 1939 and was a son of the late Lionel and Yvonne (Martin) Theriault.

Paul had been employed by Dana Wallboard Supply for 43 years. He was a US Navy veteran having honorably served from 1956 to 1960.

Paul was an avid golfer and was a member of the Buckmeadow “Old Bucks” Golf Club. Many people know him as Buddha for his happy laugh and truthful words among other things. He had many other nicknames including, Sunshine, Pepere, Papa Smurf and PT. Paul was much loved and will be deeply missed by many.

He is survived by his children, Susan Vallier and Eric Braselmann of Hudson, Brenda Davis and her husband Richard of Londonderry and Karen Wiseman and her husband Brian of Worcester, VT, four grandchildren; Joshua Vallier, Savannah Vallier, Aidan Wiseman and Corey Wiseman, One sister; Linda Palmer of Londonderry, One brother; Richard Theriault of Allenstown. He is also survived by many, nieces, nephews, and cousins. Paul had resided with loving friends, Steven Vallier and Susan Brown.

Relatives and friends are invited to his visitation on MONDAY, March19th from 4 until 8 PM at ANCTIL-ROCHETTE & SON FUNERAL HOME, 21 Kinsley Street, Nashua. His Funeral Service will take place on TUESDAY, March 20th at 10:00 AM in the funeral home. Interment will follow in St. Louis Cemetery, Nashua. To leave an online condolence, story, or message please visit www.ANCTIL-ROCHETTE.com.