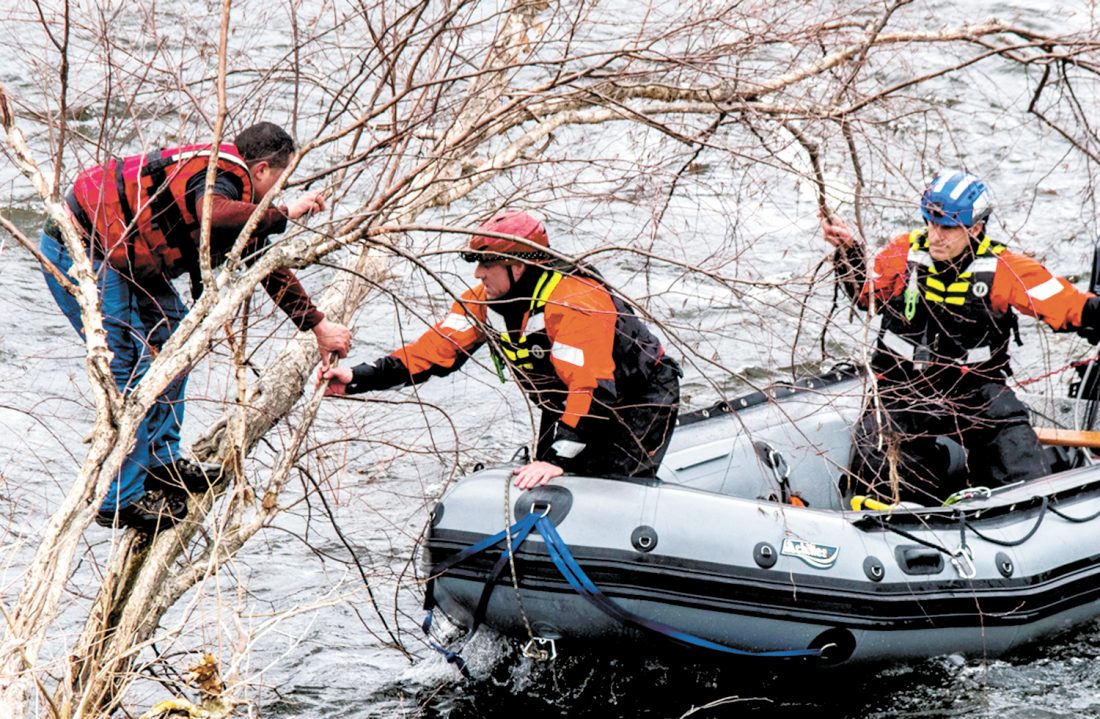 Photo by JEFFREY HASTINGS Rescue divers approach a man clinging to tree branches in Merrimack River rapids in Manchester Saturday. He was one of two men rescued after their kayaks flipped over in the rushing water.

MANCHESTER – A pair of kayakers, who indicated they are brothers, were recovering Sunday from a harrowing ordeal that began as an apparent attempt to negotiate a stretch of rushing rapids in the Merrimack River.

The men, whose identities weren’t immediately known, are inexperienced kayakers, and according to reports, neither one had a personal floatation device (PFD) aboard their respective kayaks.

According to Jeffrey Hastings, an independent photographer/videographer who witnessed, and captured in photos and on video, the rescue operation, rescue personnel from Manchester and Bedford received multiple calls early Saturday afternoon reporting two men “in very heavy rapids” in the river just south of the I-293 bridge.

Hastings said the men were “clinging onto items trying to hold on” while Manchester firefighters launched two boats from the river’s eastern shore. One man, Hastings said, was able to make his way to a small island, where the crew on one of the boats was able to reach him.

Meanwhile, he said, crews in the other Manchester boat and the Bedford boat located the other man “clinging to a tree in the middle of heavy rapids.”

They were able to pass a PFD to him, and once he put it on, Hastings said, the Manchester crew inched the boat close enough to reach the man and pull him into the boat.

“The man clenched onto one of the rescuers as he was brought to shore to awaiting medical personnel,” Hastings said.

The men were given dry clothes and evaluated by the medical personnel. Whether either was transported to a hospital wasn’t known.

Manchester District Fire Chief Hank Martineau said that when his crews arrived, the man on the island “gave a hand signal that indicated there was another man down the river.”

Meanwhile, Marine Patrol and Fish and Game department officers were on boats in the river when Saturday’s call came in.

They were searching for the body of a 37-year-old man who went missing Thursday night, and is believed to have ended up in the river after suffering a seizure in or near a homeless encampment.

They responded downriver to the scene on Saturday to assist, Martineau said.

The body of the man from Thursday night hadn’t been located as of Sunday evening.