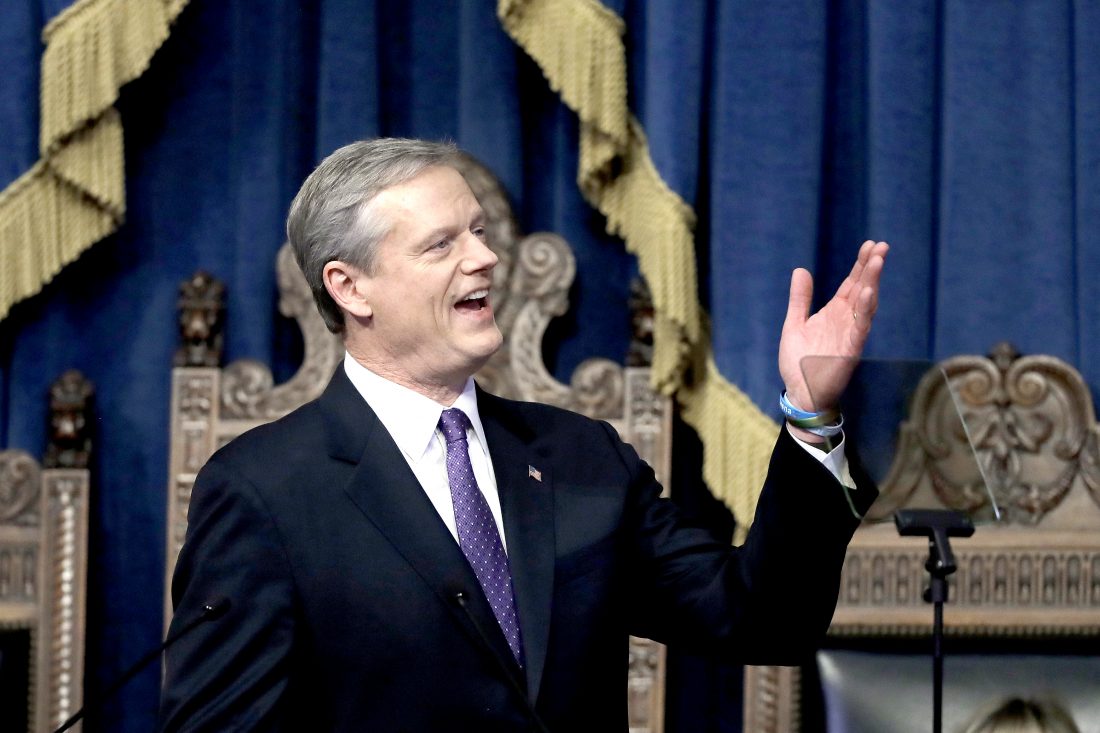 Massachusetts Gov. Charlie Baker delivers his state of the state address in the House Chamber, Tuesday, Jan. 21, 2020, at the Statehouse, in Boston. (AP Photo/Steven Senne)

The program will focus on alerting individuals who may have come in contact with someone who tested positive for COVID-19 so they can self-quarantine or be tested themselves. Massachusetts will be the first state to launch such an initiative, Baker said.

The program will deploy nearly 1,000 workers to connect with COVID-19 patients and their contacts.

Baker said it was time to start going on offense against the disease.

Dr. Joia Mukherjee, chief medical officer of Partners In Health, acknowledged the task will be difficult.

“We are daunted by the challenge, but we are undaunted by the moral need to stop the epidemic,” she said. “Is it too late? It cannot be too late. We need to mitigate the suffering now.”

People in jail awaiting trial in Massachusetts should be released due to the coronavirus pandemic unless prosecutors can prove they pose an “unreasonable” danger to the community or flight risk, the state’s highest court said Friday.

People who are being held on bail and aren’t facing certain serious offenses are entitled to a “rebuttable presumption of release,” the Supreme Judicial Court ruled.

Defense attorneys had filed a petition last week asking the judges to reduce the number of people entering jails and prisons, order the release of certain pretrial detainees and free those serving sentences who are nearing the end of their term, vulnerable to COVID-19 or don’t pose a threat.

The number of people in Massachusetts who have died from COVID-19 rose to 192 Friday, an increase of nearly 40 deaths since Thursday, as the number of residents who have tested positive topped 10,000 according to the Department of Public Health.

More than 900 have been hospitalized since the outbreak’s start. Nearly 63,000 have been tested.

For most people, the virus causes mild or moderate symptoms, such as fever and cough that clear up in two to three weeks. For some, especially older adults and people with existing health problems, it can cause more severe illness, pneumonia, or death.

The number of veterans who have recently died at the Holyoke Soldiers’ Home is now 21, 15 of whom tested positive for COVID-19, state Heath and Human Services Secretary Marylou Sudders said Friday.

Tests for three other veterans who have recently died are pending, two tests were negative and the cause of one death is unknown. Fifty-nine other residents and 18 staffers have tested positive.

The number of COVID-19-related deaths at the Chelsea Soldiers’ Home remains at two, she said. Eleven other residents and five staff members have also tested positive.

Seven residents at a Norwood nursing home who tested positive for the coronavirus have died, and at least three of those are attributed to complications from COVID-19, a facility official said Friday.

Twelve residents have tested positive for the virus at the Charlwell House Health & Rehabilitation Center, said Vice President of Operations Chris Roberts. Some of the seven deaths were blamed on other health problems, he said.

The National Guard responded Friday to the Life Care Center of Nashoba Valley in Littleton to test residents for the virus that causes COVID-19, town officials said in a statement.

Nine residents and eight workers have tested positive at the center, and one resident has died, Life Care Centers of America wrote in a press release, according to The Sun of Lowell.

Baker signed a bill Friday that extends the state income tax filing deadline for residents from April 15 to July 15. It also lets cities and towns offer extensions for property tax exemption and deferrals to June 1 and let annual town meetings be delayed beyond June 30.

Any termination of water, sewer, trash collection or other essential municipal services would be prohibited if a resident is unable to pay local taxes or fees because of a COVID-19-related hardship.

The bill also allows restaurants that are licensed to sell alcohol for on-premises consumption to sell wine and beer with food takeout and delivery.