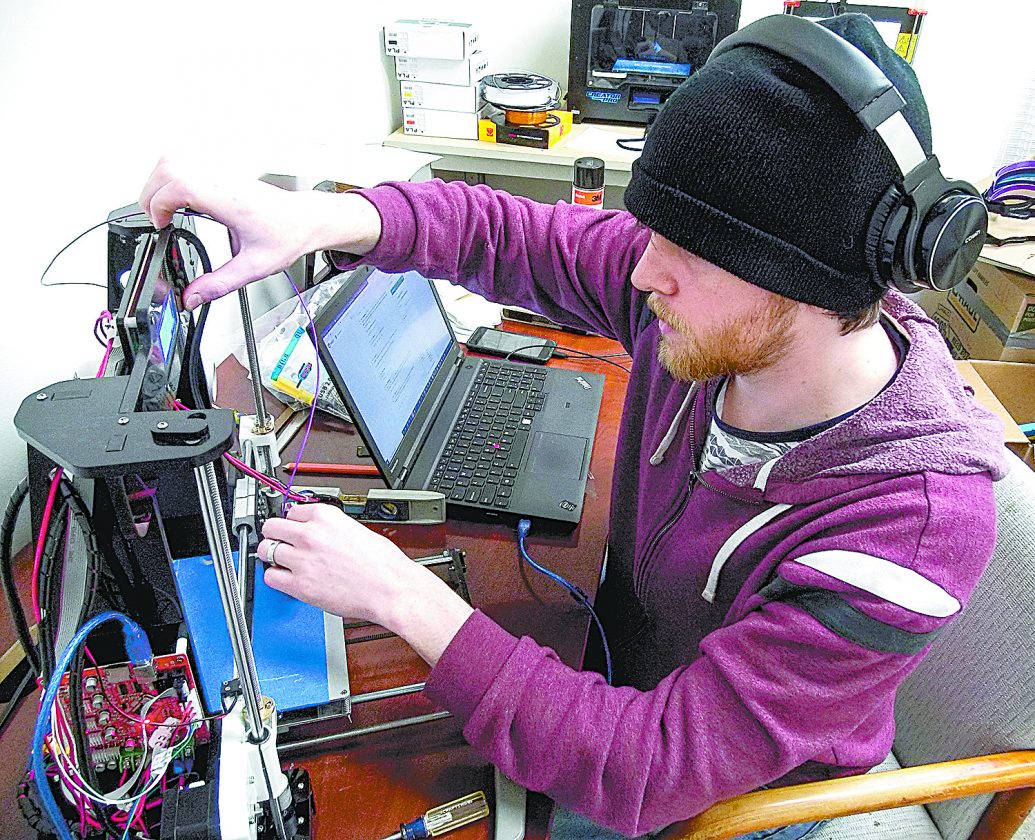 Photos courtesy of Lipofskyphoto.com Dan Bower works at a 3D printer to make components of a plastic mask.

In response to the COVID-19 coronavirus pandemic, makerspaces across the state have mobilized an effort to manufacture protective face shields for health care workers, Roy Schlieben, executive director of MAxT Makerspace in Peterborough, said.

“We decided to look into it about two weeks ago and within three days we were printing stuff and we were in contact with the other makerspaces and got tied into the other things going on in the state,” Schlieben said. “Our members are also working on fabric masks.”

Schlieben said when they started working on this, everyone was looking for a way to help when they realized they could use the makerspace’s 3D printers and laser cutter to make face shields. Schlieben said he soon learned that other makerspaces in the state wanted to do the same.

The effort now has grown to include a makerspaces throughout New England and includes Claremont Makerspace, MakeIt Labs in Nashua, Manchester Makerspace, MAxT Makerpsace in Peterborough, Port City Makerspace in Portsmouth, in Massachusetts Lowell Makes in Lowell and Artisans Asylum in Somerville, in Connecticut Makerspace CT in Hartford, and in Vermont Generator in Burlington

The makerspaces started coordinating their efforts through the app “Slack.”

“The Slack makerspace network was formed over the past year and this is really the first time we have collaborated statewide,” he said. “This is one area where we can really help.”

So far the effort has only cost Schlieben about $80 out of pocket buying supplies. A donation of 6,000 pounds of PET plastic sheet last week and another 8,000 pounds of it on Sunday is fueling the coordinated effort between New England makerspaces, municipalities, businesses and health care facilities to mass-produce and deliver face shields for the COVID-19 effort.

“All these companies are just coming together and the makerspaces too. It’s not ‘how much can I make off of this?’ it’s ‘what can I do?’ … ‘What can I do to get this PET to the frontlines?'” said Nat Fairbanks, a board member of MakeIt Labs in Nashua.

He said it all started with a donation from the Coca-Cola Company.

Fairbanks said MakIt Labs also helped coordinate with Coca-Cola to transport 6,000 pounds of plastic sheeting from Sonoco’s warehouse in North Carolina to Georgia Tech in Atlanta where students will use the plastic sheeting to make more than 50,000 plastic surgical shields for healthcare workers in the Atlanta area.

“Another supplier, Filmquest, has generously agreed to donate 1,200 pounds of polyester film that will be assembled by MakeIt Labs volunteers into plastic surgical shields and donated to hospitals,” Coca-Cola said in the press release.

Fairbanks said this effort came together within a few days.

The city of Nashua and local companies have helped, he said. For example with that much plastic the MakeIt Labs needed a forklift to move it into the makerspace as well as into vehicles when others came to pick it up for delivery to other locations. So a forklift is on-site this week, courtesy of a local business, Fairbanks said.

“It’s staggering how many people are contacting us to help,” he said.

Several businesses in Lebanon will be receiving some of the recent shipment of plastic which will be used to make face shields for Dartmouth-Hitchcock Medical Center and Upper Valley area medical centers. The Lebanon companies also plan to ship 1,000 shields to California. And 1,800 pounds of the plastic is being delivered to New York City. “They are one of the big hotspots,” Fairbanks said.

Alex Nunn, general manager of Port City Makerspace in Portsmouth, said his makerspace got involved when contacted by former nurse Patty Pagels. Since then the makerspace has been focused on using 3D printers to make a budmen version of the face shield, he said.

Pagels, a Hampton resident, said she had only become a member of the Portsmouth makerspace a month ago when she took a welding class.

Before she was a nurse Pagels was an engineer, she said. She is now a glass artist and works out of her home studio Fractal Glass.

“I’m a former nurse. I literally just let my license in Massachusetts lapse,” she said. “I’ve transitioned over into stained glass.”

Knowing the need was out there she enlisted some friends who had a 3D printer. “I literally started with my next-door neighbor,” she said. “The first mask I found was the budmen. … “They made a design and started working with their local hospital to get it approved.”

Pagels then went on Facebook and soon connected with the makerspaces and now coordinates between makerspaces and getting deliveries to local health care facilities and nursing homes.

“It’s so nice all these people are just donating their time, donating their filament,” she said. “As a former nurse it’s just an incredible feeling.”

A neighbor of hers, who was a cook at a restaurant that has not stayed open for take-out, has become a delivery driver for her going as far as Nashua and locations in Massachusetts for her. “He’s struggling with the unemployment system cause apparently nobody’s first checks came out,” she said.

“She’s been figuring out where to distribute them to,” Nunn said.

Fairbanks said Pagels has become an integral part of the operation.

Southern NH Medical Center has also helped with feedback on the design of face shield and allowing the shields to be sterilized in its sterilization lab.

Most of the 3D printing work is being done at home since in recent years 3D printers have become so “cheap and ubiquitous” many members have one at home, Fairbanks said.

“We have at least 30 people working at home that are directly related to MakeIt Labs,” Fairbanks said. “Another 30 are working directly with us, but are connected to other makerspaces.”

Meanwhile, the Peterborough operation had about 15 volunteers, as of Monday, most of whom were already members of the makerspace. Schlieben said he put out the call for volunteers via an email blast to makerspace members. Some volunteers have had to be trained on the 3D printer, but it has been worth it, Schlieben said.

Volunteers are still welcome to join the effort, Schlieben said.

“I’m also involving anybody in the community around us if they have a home 3D printer they can start printing off parts,” he said. “The slowest part is printing, so the more people printing the better.”

Materials needed to make the face shields include spools of filament for the parts made on the 3D printers and plastic.

“We’ve got a good community that has sort of rallied to this cause and sort of helped out as we have gone along,” he said.

To keep the social distancing guidelines volunteers are working alone and asked to wash their hands as much as possible.

“We’re only allowing one person at a time to work in the makerspace. We have gloves for people to wear,” he said. “If people have masks that’s encouraged, wash your hands before you come in.”

The assembly of the face shields takes place at the makerspace.

“Most of the people are making the parts at home and bringing them to the makerspace and they can be assembled at the makerspace,” Schlieben said.

The project should be sustainable for about month, he said.

“As long as we are able to buy and get materials we can go for the next month or so,” Schlieben said. “As long as people still want the shields and we are ready to make them.”

Schlieben said they are using instructions from Prusa to make the protective face shields, which can be found online at https://www.prusaprinters.org/prints/25857-prusa-protective-face-shield-rc2.

To get involved contact your local makerspace. If you are in the Peterborough area you can reach Schlieben at Roy@maxtmakerspace.org. Fairbanks said people canalso find out more or get involved by going on line to MakeitLabs.com/covid19

These articles are being shared by partners in The Granite State News Collaborative. For more information visit collaborativenh.org.