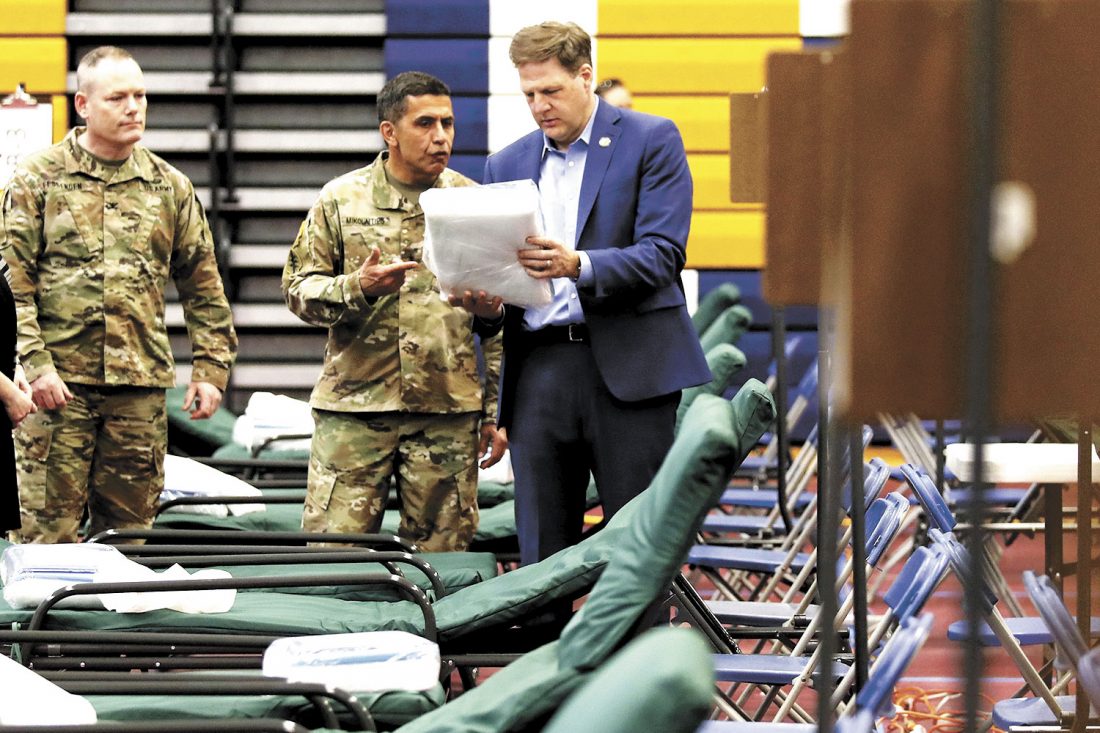 New Hampshire Gov. Chris Sununu, right, examines bedding packets as he tours a makeshift medical facility with N.H. Army National Guard Col. David Mikolaities, center, and N.H.A.N.G. Col. Erik Fessenden, left, at a gymnasium at Southern New Hampshire University in Manchester, N.H., Tuesday, March 24, 2020. The facility, and others across the state, will open when there is demand for patients impacted with COVID-19. For most people, the new coronavirus causes only mild or moderate symptoms. (AP Photo/Charles Krupa)

CONCORD – New Hampshire could see a peak of the COVID-19 virus by late April or early May and is working hard to get more medical equipment to deal with the expected surge, the Executive Council was told at its regular meeting on Wednesday.

The state announced at 5:30 p.m. Wednesday there were 29 new cases overnight, bringing the total to 137.

Health and Human Services Commissioner Lori Shibinette briefed the council, saying it is far from over and likely going to get worse in the Granite State.

As of Tuesday night, New Hampshire had reported one death and 108 people testing positive for the coronavirus, with about a dozen hospitalized. Shibinette would not specify which hospitals are caring for the patients.

There were, Shibinette said, 2,500 people who have been tested and approximately 800 results pending. Dartmouth-Hitchcock Medical Center in Lebanon brought online its COVID-19 testing lab Tuesday, she said.

“So, we expect to have a fairly high escalation in our positives,” Shibinette said.

With about 1,000 ventilators in the state for 1.3 million people and some on order, Shibinette said a focus is to ramp up and source necessary protective equipment and health care supplies to prepare for surge capacity.

Shibinette was among several commissioners peppered with questions about the pandemic in the first council meeting that was held remotely because of the virus.

Another area the state is focusing on is setting up flex centers across the state with each community involved to prepare how to handle an overload of cases should they overwhelm hospitals.

There will be surge hospital facilities in Manchester, Nashua, Durham, Concord and in the Cheshire County areas, she said with the first already established in Manchester with 250 beds this week at Southern New Hampshire University.

The planning is still underway with help to set up coming from the New Hampshire National Guard, she said.

For those with very mild symptoms of the highly contagious virus, and who do not want to bring it home to families or have nowhere to go, the state is planning to find hotels to allow for such isolation, Shibinette said.

The five executive councilors – who each represent a region of the state – have been hearing from many constituents with questions as the state grapples with the health emergency.

But Sununu said there are practical considerations for enforcing such an order, and said his current orders, although they can change, are largely in line with neighboring states.

“We have to take a regional approach,” Sununu said, noting the state was considered among the most advanced for taking actions to protect citizens. The state is listed as eighth in the nation on per capita testing, Sununu said.

Vermont, he said, may be the exception of the neighboring states, because “they have quite an issue,” with half of New Hampshire’s population and a similar number of cases.

The governor has closed schools, restaurants, bars – except for take-out – and urged people to stay at home. If they are in public, they should be more than six feet from each other with gatherings limited to 10 people.

Sununu said many hair and nail salons had closed voluntarily, for example, but he could issue emergency orders additionally for closures, if necessary.

Pignatelli asked the governor if the deadline for federal taxes being filed has been moved back from April to July 15, might the state look at the same time frame.

Sununu called it a “great question” and noted he is meeting to discuss this and “what flexibility we can and should provide. I think we can do something on this front.”

Pignatelli asked Sununu to have Secretary of State William Gardner to attend the next meeting to discuss how he plans to go forward with crowds, voting booths and anything that he sees are issues in light of the pandemic. Voters will be going to the polls in September and November.

Sununu said he would be happy to make the request but encouraged councilors to talk with Gardner directly.

George Copadis, commissioner of the Department of Employment Security said a ramped-up call center to deal with unemployment has stepped up to the plate.

He noted that before COVID-19, the department was handling about 500 new cases a week. Last week, they fielded 13,000 calls at the call center.

This week, he said, they have had 41,304 new registrations for unemployment insurance. The agency was among the first to close its doors and go to remote processing. They have been working 12-hour days, from 8 a.m. to 8 p.m. and on weekends from 9 a.m. to 5 p.m. to allow people “to get the money they are entitled to” and need.