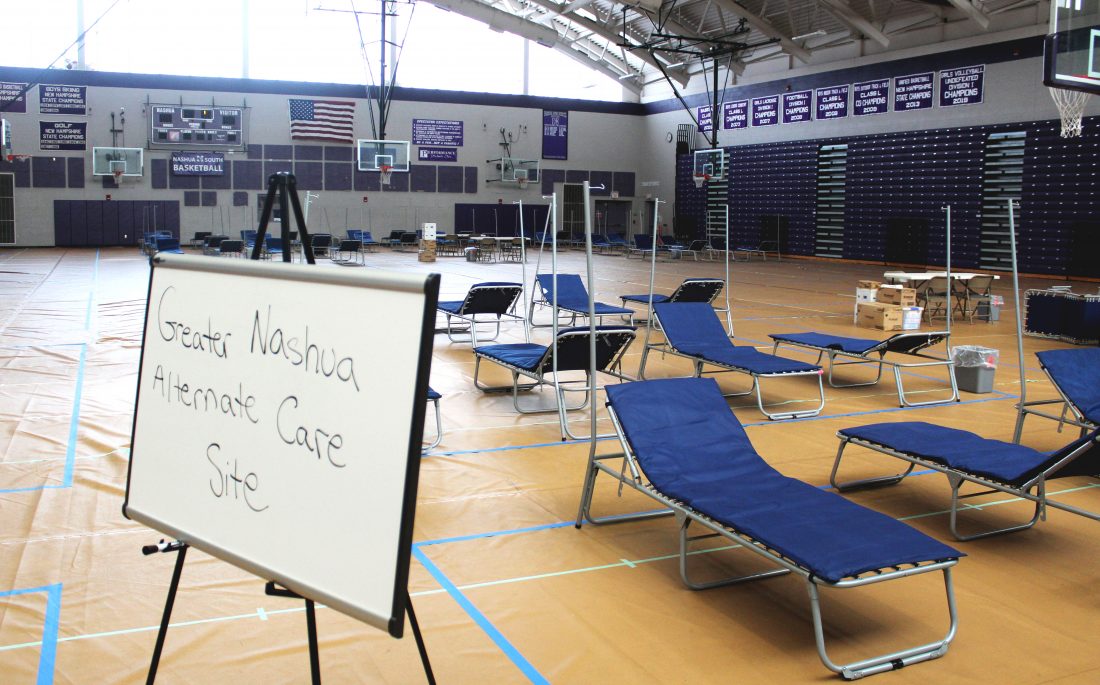 NASHUA – New Hampshire is ranked the fourth most aggressive state in action to stop the spread of COVID-19, and another step was taken Tuesday with the announcement that Nashua High School South will serve as a temporary hospital as confirmed cases continue to rise across the state.

“We are compelled to help in any way we can,” Superintendent Jahmal Mosley stated in a letter issued on Tuesday.

His letter detailed how this decision came at the direction of Governor Chris Sununu in light of the expected surge in patients suffering from COVID-19. The governor also ordered the New Hampshire National Guard to help set up the facility immediately, beginning on Tuesday. This temporary hospital hub is being set up in the athletic wing of Nashua High School South, similarly to when South has been utilized as an emergency shelter on separate occasions. Officials have not yet determined the duration this service will be in place for, although schools were previously thought to be closed from March 16 through April 3.

“This is all developing,” Mosley told the Telegraph on Tuesday morning. “I think at this point, it’s safe to say we’re looking at a different date for school to commence.”

Mosley said we all have to take this very seriously, and that he believes that is starting to seep in a little bit. The school district is continuing to encourage students to be aware of social distancing and to make sure to get into some sort of a routine at home that allows them to pass the time constructively. While logistics around this hospital hub and remote learning are still being worked out, Mosley encourages people to stay safe and healthy, both mentally and physically.

Director of the City’s Division of Public Health and Community Services Bobbie Bagley said various sites are being set up across New Hampshire in anticipation of a medical surge of people who may need to be in the hospitals.

“I think all of our city partners and different sectors have worked very collaboratively to address this COVID-19 response,’ Bagley said.

Spokesperson for Southern New Hampshire Medical Center (SNHMC) Suzanne Tammaro said that South is being set up as an alternative care site or clinical flex area with combined effort from NH HHS, National Guard, SNHMC and St. Joseph Hospital. Tammaro said this will not be a site for patients to enter into care, rather those pathways will be through the providers and hospitals. The high school is one of seven sites being set up across the state.

“SNHMC is planning to expand use of our existing facilities and campus space to care for patients with the clinical staff and providers, equipment and other resources easily accessible onsite to meet the most acute needs,” Tammaro stated via email.

“This alternative care site will allow us the flexibility to expand or relocate clinical services that may be needed to manage our communities needs as circumstances or events warrant, with plans developed in collaboration with our local city officials and emergency management leaders as well as NH DHHS and the national guard.”

Bagley said the National Guard was working to get cots set up at the school Monday, and that once that step has been completed, officials will need to have a planning phase for how it will be operationalized.

Tammaro said the set up at South is for 160 beds, with the ability to add more. Bagley also said Nashua was number two on the list for this hospital hub initiative, with one set up in Manchester at Southern New Hampshire University as well.

As far as Nashua’s effort goes, Bagley said with the school opening their doors to have this facility available to the hospitals just shows that great collaboration that Nashua has to keep the community safe and to support its workforce. Additionally, as with all health care facilities, the school will be restricted to all visitors, teachers and staff.

“In the meantime, I encourage you to continue to stay at home,” Mosley further stated in the letter. Please take care of yourselves and of each other as our healthcare workers strive to take care of us all.”

State officials announced New Hampshire’s first COVID-19 death Monday, a man over 60 from Hillsborough County with pre-existing health conditions. The week also started off with the New Hampshire Department of Health and Human Services reporting 101 confirmed cases of COVID-19 in the state, as of 9 a.m. Monday. At this time, NH DHHS also reported 11 (11 percent) hospitalizations, 869 persons with tests pending, 2,417 persons tested and 900 persons being monitored.

Sununu applauds a new report that ranks New Hampshire as the fourth most aggressive state in action taken to stop the spread of COVID-19. This report follows earlier reporting from FiveThirtyEight’s Nate Silver, also showing the state as one of the highest tests-per-capita states as well. In terms of measures taken, this ranking places New Hampshire among other states such as California, Rhode Island, Maryland and New Jersey.

“Today’s study recognizes we are taking unprecedented and proactive steps,” Sununu stated. “Testing is ramping up. And we are working around the clock to slow and mitigate the spread of COVID-19 here in New Hampshire.”

During a press conference held at 2:30 p.m. at NH Fire Academy Administration Building in Concord on Tuesday afternoon, Sununu said over 100 manufacturers in the last 48 hours have stepped up and contacted the state asking how they can be involved, whether creating devices or personal protective equipment (PPE), medical supplies. There is also a website site up for those folks that would like to be part of these efforts, which is https://www.nheconomy.com/ppehelp. This is one of a few initiatives the governor highlighted Tuesday.

Moreover, Sununu wants to make sure people take this public health threat seriously, citing how officials are in this for the long haul. Officials do not know when the surge is going to hit its peak. However, as testing in the state ramps up and triples over the next day or so, a huge surge in the numbers of reported COVID-19 cases across New Hampshire will be seen in the next couple days. Sununu said this is absolutely expected because the state is simply getting much better at identifying these individuals, which will allow them to be isolated that much quicker.

“There will be a surge here,” Sununu said during that press conference. “It’s all about making sure that we can suppress it to the level that we manage, and don’t overrun the health care system. The fact that Dartmouth-Hitchcock is coming online with their new testing capabilities is gonna give New Hampshire another huge leg up in our ability to identify the crisis on a very individualized level and keep that suppression where we want it.”

During the conference Sununu announced other initiatives, including an effort to coordinate health professionals to mobilize online at https://nhresponds.org/, which serves as a secure online registration system for medical and nonmedical volunteers to quickly mobilize. The website states that this is part of a federal effort to coordinate and assemble volunteers for all types of emergencies.

Sununu also announced ways in which any citizen who has the ability to lend a helping hand can help. If people are interested in volunteering with a local nonprofit, the team at Volunteer New Hampshire can connect them with an organization in their area. Additionally, those operating a nonprofit can register their organization as well at, https://volunteernh.org/.

“The short and long term forecast in terms of state revenues is not good,” Sununu said. “There’s just no getting around that. I don’t mean to be overly dire about it, but that shouldn’t be a secret to anyone. Revenues are going to be drastically impacted at the state level. What we need to do is, again, find ways that we can keep the most vital services moving forward, making sure that folks are getting exactly what they need. We’re gonna have to make some cuts one way or another.”

Since things are early on in this situation, it is a bit unknown, with Sununu citing one of the biggest unknowns being how much the federal government is going to come in with support, not just at the state level but at the towns as well.

Adam Urquhart may be contacted at 594-1206, or at aurquhart@nashuatelegraph.com. Senior Staff Writer Dean Shalhoup contributed to this story.

EDITOR’S NOTE: This content is being provided for free as a public service to our community during the coronavirus outbreak. Please support local journalism by subscribing to The Telegraph at https://home.nashuatelegraph.com/clickshare/checkDelivery.do;jsessionid=40C089D96583CD7318C1C1