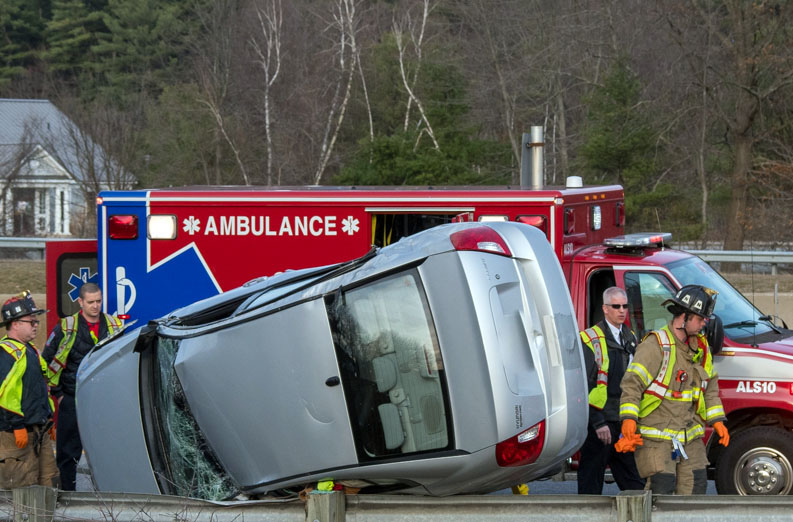 Photo by JEFFREY HASTINGS After another ambulance rushed Milford resident Richard Brown to a local hospital Friday afternoon firefighters and medical personnel survey the vehicle he was operating, which rolled over and landed precariously against the guardrail on the Everett Turnpike.

NASHUA – The Milford man who was ejected from his vehicle as it rolled and slid across the Everett Turnpike in Nashua Friday afternoon sustained critical, life-threatening injuries, state police said.

As of late Sunday evening, Richard Brown, 59, was being treated for the injuries at the Lahey Clinic in Burlington, Massachusetts, where he had been airlifted from St. Joseph Hospital in Nashua.

It was just after 5:30 p.m. Friday when state police from Troop B were called to a report of a rollover crash, which reportedly took place in the southbound lanes of the turnpike in the area of Exit 6, police said.

Troopers determined that the vehicle Brown was driving, a 2011 Hyundai Accent, struck a median barrier on the left side of the turnpike, then travelled across the highway and over the grassy area that separates the exit ramp and the turnpike itself, which police said caused the vehicle to flip onto its left side.

It then slid across the southbound on-ramp, eventually striking the guardrail before coming to rest on top of the railing.

Police said Brown was the lone occupant of the vehicle. Whether speed or other factors may have contributed to the crash remains under investigation.

Police ask that anyone with any information about the crash contact Trooper Patrick Morrissey at the Troop B barracks at 223-3849.