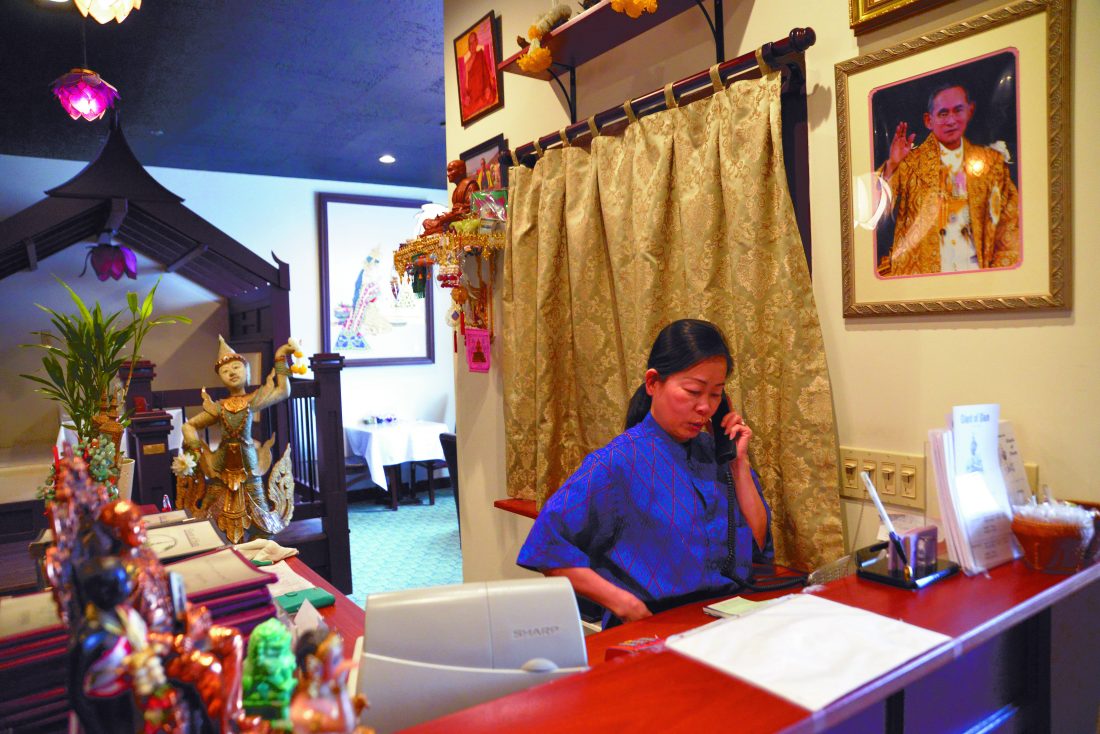 Telegraph photos by ADAM URQUHART Sujaree Collins, a waitress at Giant of Siam in Nashua, works behind the front counter Thursday, while their dining room remains empty.

NASHUA – A number of local eateries are doing their best to cope with dining room closures after Gov. Chris Sununu ordered restaurants to only offer take-out and deliveries earlier this week.

While some Nashua restaurants have locked their doors and closed up shop for the time being, others who remain open are experiencing far less business than normal. What A Bagel on East Hollis Street is located near two city hospitals and typically has a lot of first responders and other area workers come in during lunch hours.

Manager Leila Alamo’s said she and her fiance, who own the business, are doing their best to stay open for those that still have to be at work. While a number of people are out of work at the moment, the shop is trying to gauge how a full week goes to see what to expect in the coming weeks before they make any decision regarding changing their hours of operation.

“Monday and Tuesday wasn’t too bad,” Alamo said. “Wednesday was a bit scary.”

However, she also said that on Thursday and Friday, business was half what it normally would be. Alamo believes there was a misconception in the way things were initially worded when restaurant restrictions went into place. She said the shop has received several phone calls from people asking if they are open. Alamo said she thinks that, maybe, people did not understand that restaurants can be open for take-out, with patrons allowed inside the eatery to get their orders.

Paul Shea, executive director of Great American Downtown, said businesses are getting a lot of phone calls asking if they are open, and that a majority of the businesses the nonprofit has been in contact with are remaining open. GAD has worked to connect with businesses to gather information on their change in practices as things develop with COVID-19.

While Shea does not believe there has been any confusion among food businesses in regard to the changes, he said there have been concerns shared with him from businesses relative to the way it has been described on some of the television news outlets. With the way the dining room restrictions have been described, he said some businesses are concerned the general public may be confused.

In addressing some of that confusion, he said many of these small businesses are remaining open and are ready to meet the needs of the public. Information on various food options in the community can be found online at the GAD website, https://downtownnashua.org/.

“Food, especially, is an essential service, and on a personal level, I’m grateful for all the hard work these people are putting in to keep people fed during this challenging time,” Shea said.

“Mainly on weekends, we see a lot of families come in after church and such,” Alamo said. “We have a lot of regulars that do that. I’m kind of curious how this weekend is going to go for us.”

What A Bagel is not alone with experiencing less business during the pandemic. Giant of Siam on Main Street also is seeing less business. Owner Korapin Sueksagan said take-out and delivery accounts for less than 10 percent of business, and with COVID-19 concerns sending people to area supermarkets to stock up on food, she is noticing less take-out and delivery orders.

Sueksagan said she believes a lot of people grabbed a lot from the supermarkets this week, and might have to consume that food before looking to grab take-out. She feels that it’s better to keep the business open for the people in the community that need it, citing how some live in single rooms with no cooking options.

“Everybody has to survive, it’s not just us, it’s everybody,” Sueksagan said. “Together we can be strong. I agree with the idea that people should not go in a big crowd.”

Nashua House of Pizza on East Hollis Street blocked off their dining room this week and closed their bathroom to the public. Owner Madeline Kariotis said employees have been doing a lot of extra cleaning.

“We’re trying to do whatever we can to stay open,” Kariotis said. “I’m trying to keep my employees, and their families and my customers as healthy as possible through this, and we’re going to go through it together.”

With the pizza shop still able to continue offering delivery and take-out orders, Kariotis said those orders have slowed. However, with the option still on the table, she said the establishment can stay in business for now, until they are told they cannot. Thursday night, the restaurant began closing earlier than usual. Currently, they are open from 11 a.m. to 8 p.m. Sunday through Thursday, and will stay open until 9 p.m. on Friday and Saturday.

“It’s slowed down a little bit, but because it’s pizza and it’s something everybody wants, we’re doing okay,” Kariotis said.

More information on the governor’s orders can be found online at https://www.governor.nh.gov/index.htm.