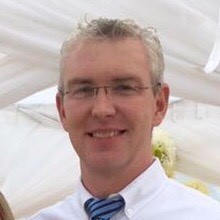 NASHUA – Today marks the first day of winter break for many area school districts, and officials may be breathing a sigh of relief after navigating safety concerns the last day of classes before the recess.

Violence was averted in both the Nashua School District and at Souhegan High School Friday, as school officials and police quickly responded to alleged threats to student safety. As of presstime late Friday night, The Telegraph was not aware of any arrests stemming from the claims of potential harm to students in both school systems.

However, Nashua Police Lt. Matt DiFava said there is a potential for criminal charges to be filed, after an image of weapons and the wording “No one go to school tomorrow (Friday) unless you wanna get rocked,” was shared and then circulated throughout social media Thursday night among Nashua district students and parents.

DiFava said, with the nature of social media, rumors can spread very quickly. As parents became concerned, police wanted to alert the public as soon as possible that the threat was not credible. 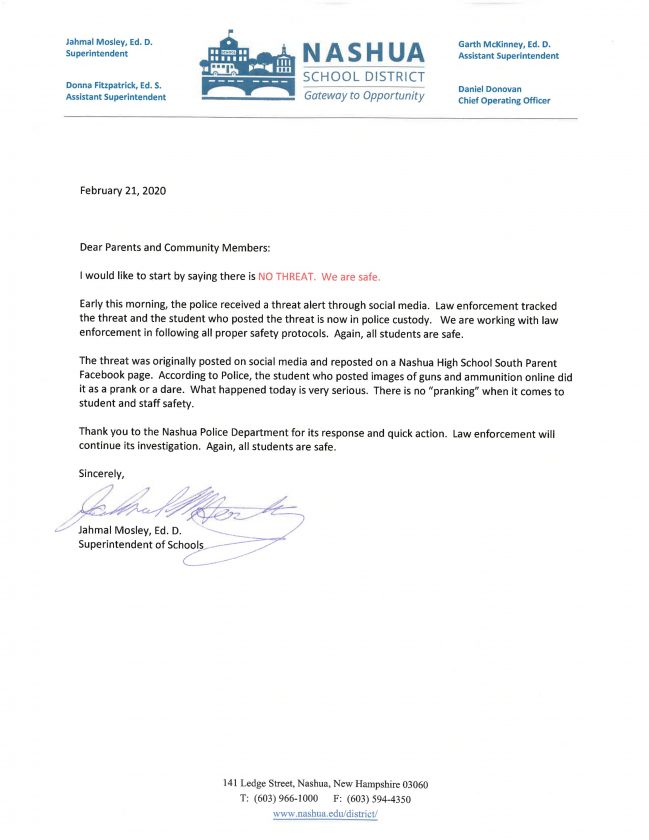 DiFava said police spoke to the student who originally posted the image and message, as well as the student’s parents and other students who may have been involved.

“There was (sic) several students that were involved, not directly with the post, but they’re still investigating it,” DiFava said. “They’ve spoken to everyone involved, and they’re working through the investigation right now.”

Nashua Alderman Tom Lopez shared with The Telegraph a screenshot of the image that was forwarded to him Friday morning. Lopez also forwarded information from the police department, and its full press release regarding the incident is available online at nashuatelegraph.com.

“I was extremely relieved when I called the police and they clarified that they had been working on it all night and had the problem well in hand,” Lopez said Friday evening.

School Superintendent Jahmal Mosley issued a letter to parents and community members shortly after 10 a.m. Friday, emphasizing there was no credible threat that all students were safe. 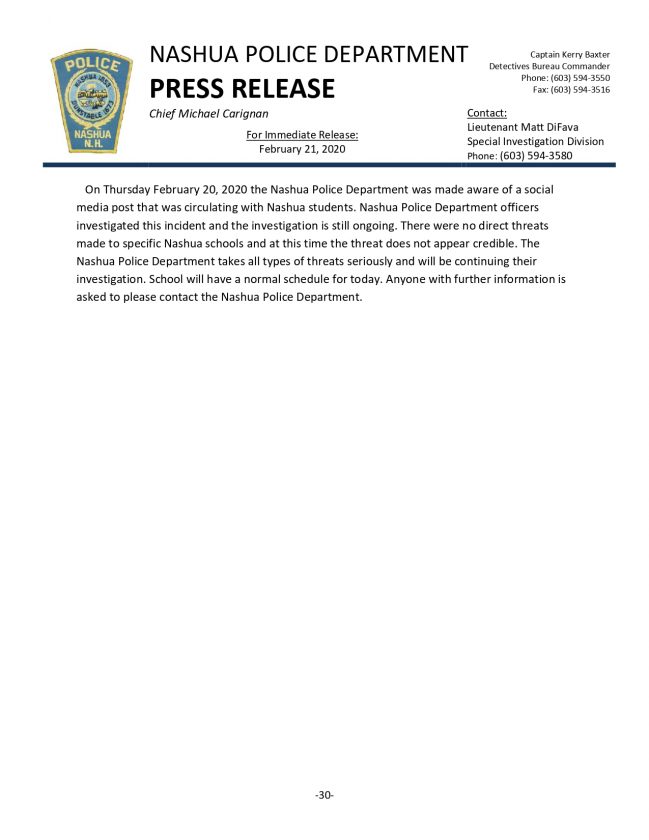 “According to police, the student who posted images of guns and ammunition online did it as a prank or a dare. What happened today is very serious. There is no ‘pranking’ when it comes to student and staff safety,” Mosley wrote in his letter, the full text of which also is available on The Telegraph’s website.

He was the second local school superintendent in as many days to release a message reassuring parents of students’ safety in the wake of ambiguous threats.

SAU 39 Superintendent Adam Steel issued an email Thursday regarding “unsubstantiated rumors at Souhegan.” In this email, he wrote he had learned of some rumors about Friday’s school day that dealt with repercussions from a fight that took place Wednesday at Souhegan High School in Amherst, during the school’s spirit week titled “Fang Fest.”

“Two boys had a beef. They started exchanging words. A friend shoved the other boy, and that boy came back swinging. He punched the other student. The fight was broken up right away, first by other students and then by staff,” is how Steel, on Thursday, described the situation that unfolded on Wednesday.

With regard to Friday’s threat, Steel wrote the following, “Normally, we try to share specific information about the rumors we are investigating. … In this case, the rumors are varied, inconsistent and frankly all over the place,” and his full statement is available via nashuatelegraph.com. 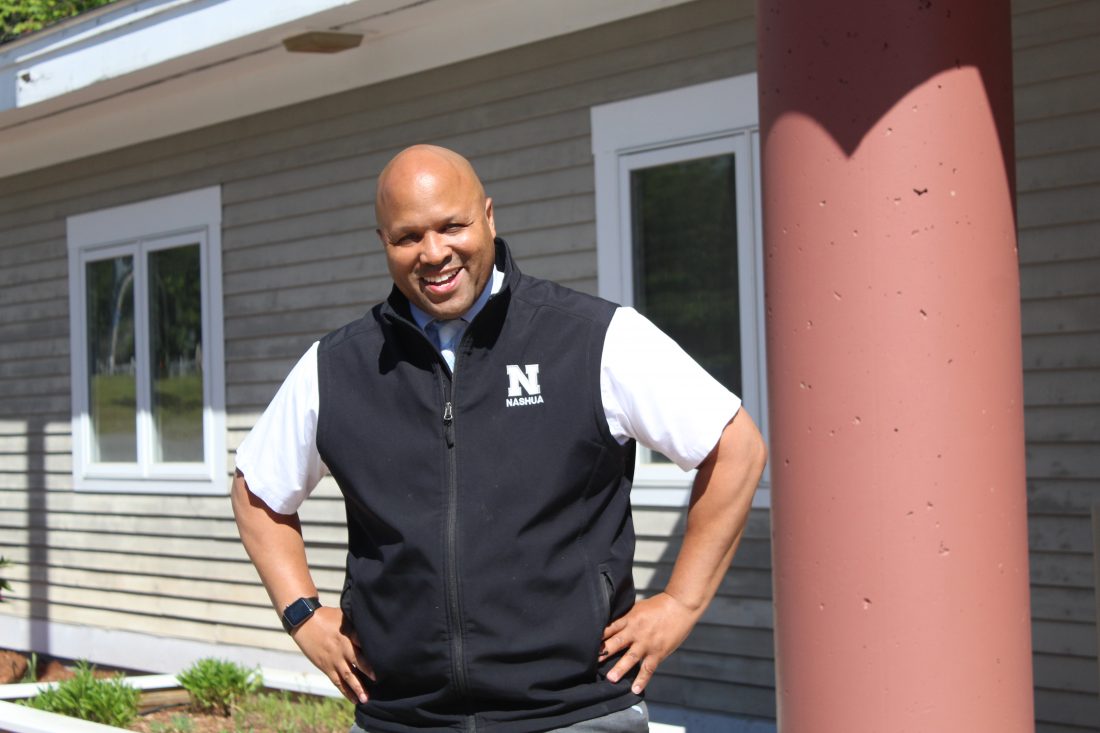 Steel added there is nothing he takes more seriously than the safety of students and staff members. Steel said he and the Amherst Police Department investigated the rumors that circulated and concluded they were unsubstantiated and there was no cause for alarm. Nonetheless, additional safety measures were in place for Friday’s school day, which appeared to pass without further incident.

Nashua police officers also increased their presence in city schools Friday. Although that threat also was deemed not credible, the Nashua Police Department tweeted that officers proceeded with an increased presence to ensure safety.

Anyone with further information about these alleged incidents is asked to contact NPD at 594-3500 or Amherst Police at 673-4900.

Nashua Alderman Tom Lopez shared this image with The Telegraph after having it forwarded to him Friday morning. This image was reported to have caused concern throughout the Nashua School District, after the photo was shared numerous times on social media. In response, and after investigation, Nashua Superintendent Jahmal Mosley issued a statement Friday declaring: “NO THREAT. We are safe.” This incident was one of two school safety threats reported for the region, Friday, the other occurring in reference to Souhegan High School in Amherst. Coutesy image 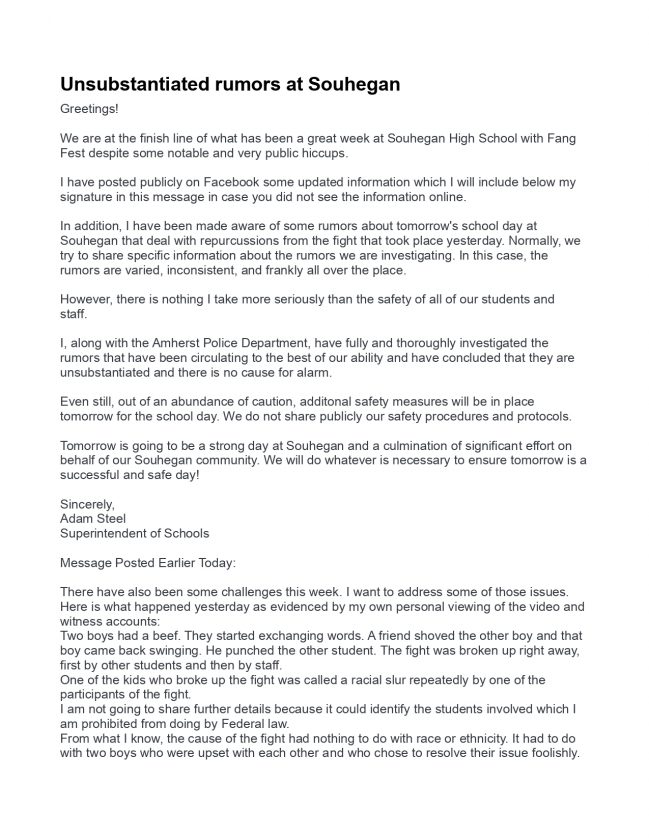 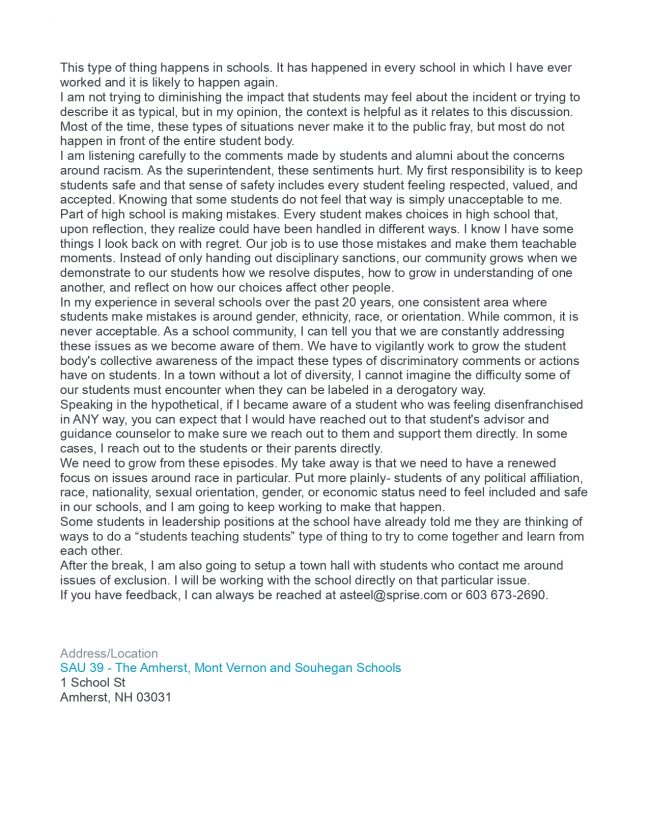