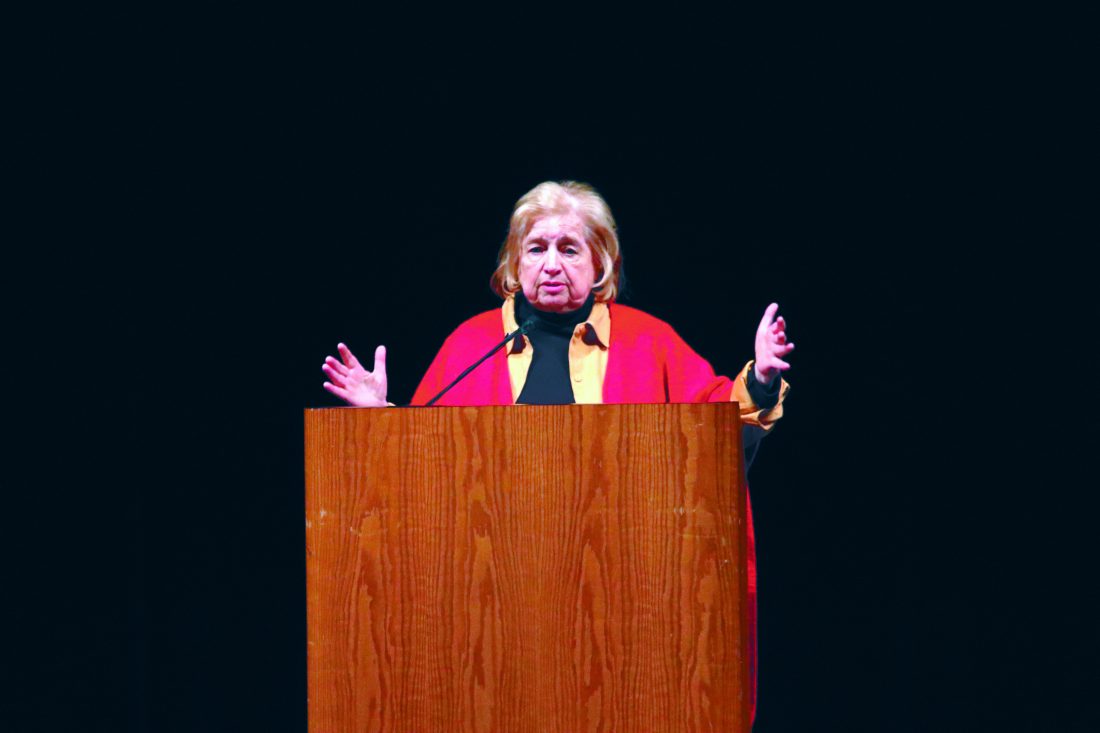 NASHUA – With themes of tolerance and acceptance, Holocaust survivor Kati Preston spoke at Nashua High School North Friday morning, recounting her wealthy upbringing and the demise of her Jewish heritage and culture.

She talked about how being a survivor of the Holocaust shaped her life and inspired her to defy discrimination.

Gov. Chris Sununu introduced Preston for the first of what is scheduled to be a series of several speaking engagements throughout the state. Sununu added that as a father of three, the world young people will face alarms him.

“The biggest problem that we see, not within our schools, but in our entire culture and entire society is simply respect,” he said. “That thing we call empathy.”

“We somehow thought it was OK to treat someone like garbage if we weren’t looking them in the eye,” Sununu said regarding the invention of social media.

Sununu then introduced Preston, born in Transylvania in 1939, who spoke of her tragic story of survival.

Preston said although she was never in a concentration camp, she was a hidden child. She was persecuted and even hunted.

The daughter of a Catholic mother and a Jewish father, Preston recalled an upbringing of privilege, having servants and a governess, before her life changed, in what she called, “a slow erosion of our liberties and an erosion of our rights.”

Preston said people began disappearing. The maids were gone. Her Fraulein was gone. And soon, for the first time, she would experience an act of anti-Semitism.

“My mother said, ‘I have a present for you,'” Preston said. “She brought this beautiful yellow star that she made out of gold material, and put it on my coat. And she said, ‘Let’s go get some pastries.’ And a man comes opposite me and I look up at him expecting something nice about my star – and he spits in my face. And the spit runs down my face onto my star. And I said to my mother, ‘He hates stars,’ never thinking that it’s me he hated.”

The 80-year-old, whose Jewish family of 28 members was exterminated in Auschwitz, was eventually saved by a Christian peasant girl, who hid the a 5-year-old Preston in a hay barn.

“I remember thinking there would be kittens and puppies,” she recollected, thinking of what life would be like on a farm. “We got to the barn, which had an attic above it. She said, ‘You’re going here. You have to stay in the barn.’ And I asked, ‘Why?’ And she said, ‘Because people want to kill you.'”

Preston said the idea that someone would want to kill her was an alien notion. She thought the woman spoke in jest.

After surviving the Holocaust by hiding in that barn, she immigrated to Israel and studied in Paris to become a journalist. Later, she ran a successful fashion business.

Preston said she misses her father and there is not grave for her to visit. She had no place to grieve.

“I speak for the dead because they cannot speak for themselves,” she said. “Now, I have a wonderful, multicultural family. I have four sons, and every time I gave birth to one of them, I was giving the finger to Hitler.”

Preston said she has never been as happy in her life as she is right now, adding that the birth of her grandchildren completed her circle.

Preston praised the generation of high school students that she addressed, calling them, “great.”

“I talk to you people,” she shared. “I feel so much compassion and love coming. It’s such a healing thing. You guys are different. And you’re not prejudiced– you don’t care if someone is blue, green, yellow, gay, straight. It’s up to you.”

She implored the students about the power of education, of learning, of knowledge. And how knowledge can teach tolerance and acceptance. She praised the power of one.

“Look at this woman who saved me,” she said. “Look at what one good deed can do.”