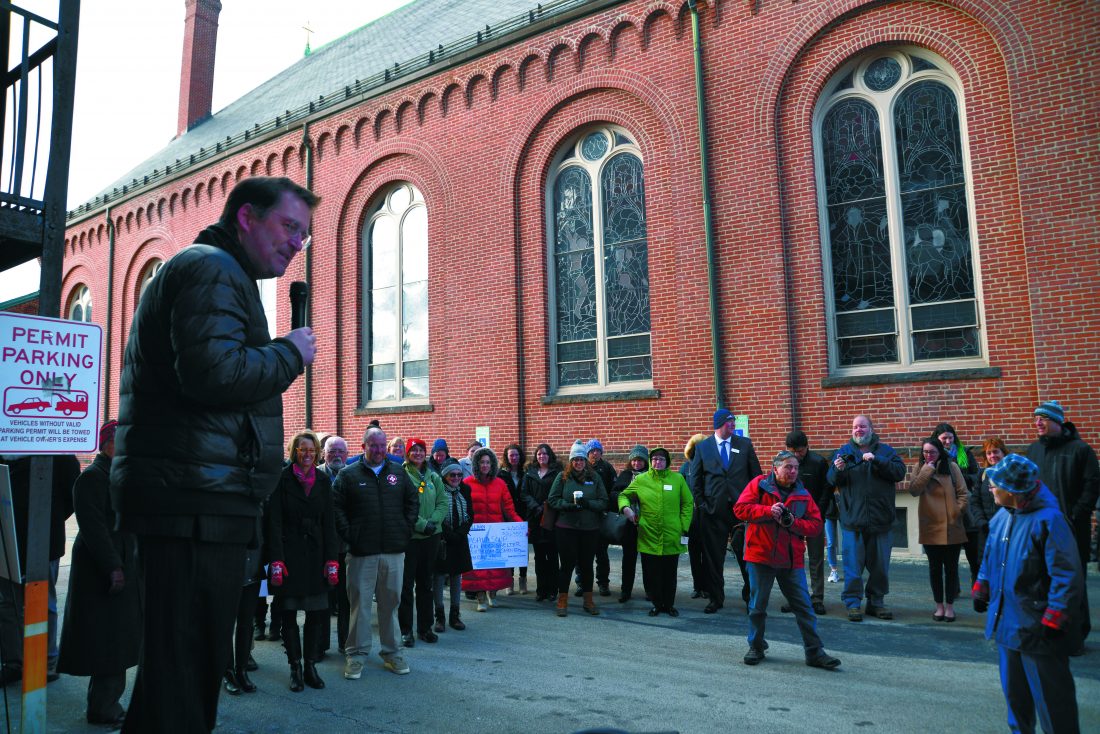 As housing costs throughout Greater Nashua remain a problem for many, they are also a contributing factor to the growing issue of homelessness. The epidemic of those who are in Nashua, yet have nowhere to really call home, is now so unhindered that officials at the Nashua Soup Kitchen & Shelter are working on a $5 million renovation project to turn the former Sacred Heart School at 35 Spring St. into a refuge for those in need.

During a Thursday gathering, shelter Executive Director Michael Reinke said about 75%, or roughly $3.7 million, has been raised for the project. Reinke said in total, the project will cost about $5 million.

In October 2018, shelter officials signed a lease with the Diocese of Manchester. Through St. Patrick’s Church of Nashua, they will be leasing the elementary school adjacent to the church for 40 years at a rate of $1 per year.

The Sacred Heart School has been mostly vacant for the past 40 years, and only a short walk from the NSKS facility on Quincy Street.

Reinke plans to solicit bids for the renovation work in April, with the hope of construction starting in July or August. If all goes as planned, this new shelter space should be online by summer 2021. The shelter will feature a number of new amenities, but most importantly, will double the amount of space in the areas that need it most – shelter space for families and single women.

Reinke expects this space will serve upwards of 12 families, which is more than double the number NSKS is equipped to help now. On a night when the organization sees this facility reach capacity, Reinke anticipates it could shelter up to 80 individuals and families, with 11 people staying in long-term permanent housing on the fourth floor. This provides more shelter space than what NSKS is currently able to offer at the two emergency shelters located on Ash and Kinsley streets.

The Ash Street shelter provides refuge for 18 single men downstairs and shelter for nine single women upstairs. The family shelter on Kinsley Street provides shelter for five families, although there is currently no space for children to play or go outdoors. That will soon change once work is completed at the new Spring Street location.

Once this is finished, Reinke said he hopes officials can transfer the Ash and Kinsley street properties to someone who will develop “affordable housing.”

The new location will offer 18 beds for single men, 14 beds for single women. It will also offer a bed separate from these areas so if someone who is ill is in need of a bed, they can have a space without running the risk of infecting others.

“That’s something that’s new for this project – we never had a sick bed before,” Reinke said.

The idea for increasing the number of beds for single women was driven by what Reinke saw as a need, taking into account that Southern New Hampshire Rescue Mission on Chestnut Street only offers shelter to single men.

“We are currently the only provider for emergency shelter for single women in Nashua and our beds are full pretty much all the time,” Reinke said.

Reinke said one of the challenges is that many have a picture already embedded in their minds of people experiencing homelessness. This leads to a picture an elderly woman with a shopping cart piled as high as her head, or a guy in need of a shower and shave, wearing seven layers of clothing.

“What the reality is, that the fastest growing segment of people experiencing homelessness are kids and families with children,” Reinke said. “We get calls every week of families needing shelter and we can’t house them.”