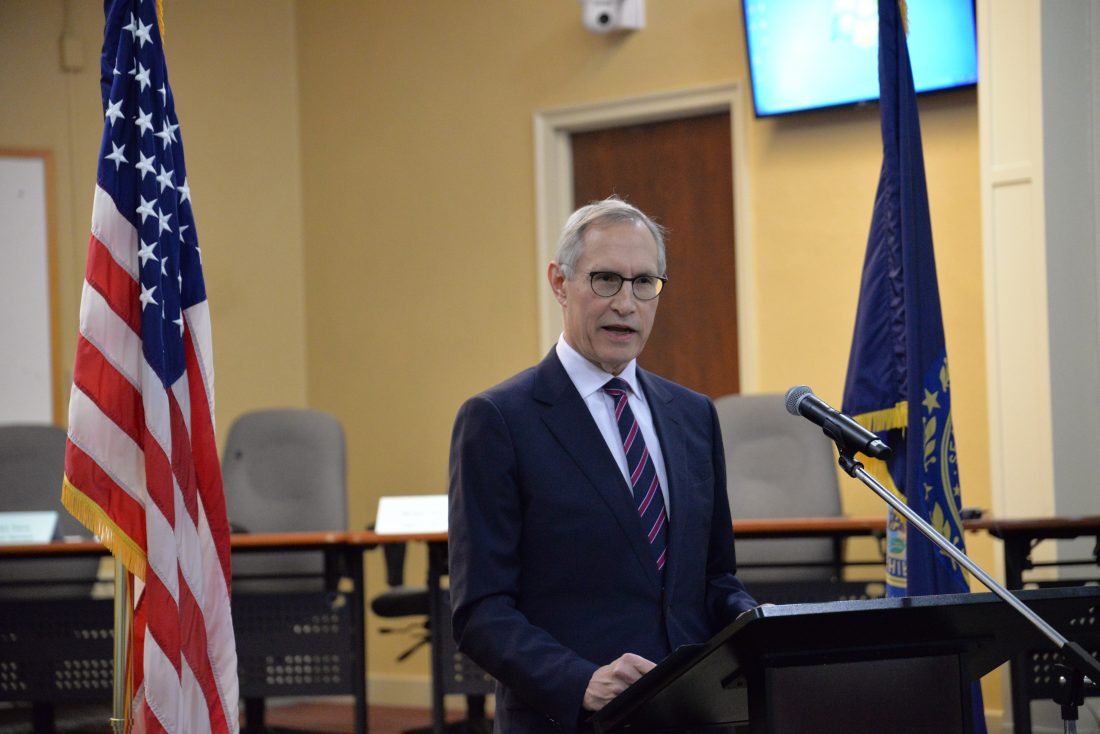 NASHUA – Rental rates rising 19% in just four years, combined with record low 0.6% vacancy, result in good times for Nashua landlords and real estate developers – so much so that city leaders are making plans to part with Elm Street Middle School so that it can become an apartment complex for “hundreds.”

Nashua is also a city:

• facing a $6 million increase in health care costs for its employees over a two-year span; and

These are just a few of the numbers and statistics Nashua Mayor Jim Donchess spoke of during the first rendition of his 2020 State of the City address, Tuesday night at City Hall.

“I can say with confidence that Nashua is a city on the rise,” Donchess said.

Members of the Board of Aldermen, other city officials and residents gathered Tuesday to hear his speech. From increasing housing availability in downtown, to the status of city schools, Donchess highlighted numerous activities occurring in Nashua.

When he was elected mayor in late 2015, Donchess committed to adding 500 new units of downtown housing and 1,000 new downtown residents within four years. Those results have been achieved, exceeding the 500-unit commitment with Lofts 34, Riverfront Landing, the Marshall Street apartments and other smaller projects. This new housing has since added tens of millions of dollars to the property tax base. However, Donchess said the city still needs more housing.

“We need to add more housing of all types – market rate and affordable apartments, as well as single family homes,” Donchess said.

As progress in the city’s Railyard District to the east of Main Street chugs along, the city has since approved plans for more than 200 units of new housing for the area. Donchess also said housing is a critical need for residents, businesses and for a healthier economy. As it is, the vacancy rate for apartments is at a record low of 0.6 percent, while rents rose 19% over the past four years.

City leaders would first need to develop a step-by-step plan regarding the future use of Elm Street. During the next four years, city officials will be focusing on the middle schools by replacing Elm Street with a new school, and by embarking on renovation and reconfiguration work to the Pennichuck and Fairgrounds facilities.

Also, the city has about 11,000 students, with 60 languages spoken across the district, ranging from Spanish to Swahili, and many others. To help these students achieve a quality education, the city added five English Language Learner (ELL) teachers to help those students become fluent in English.

While a lot has been accomplished in the last four years, Donchess believes Nashua’s best is yet to come.

Donchess will deliver his second 2020 State of the City address during a breakfast program at 8 a.m. today at Holiday Inn & Suites, 9 Northeastern Blvd.