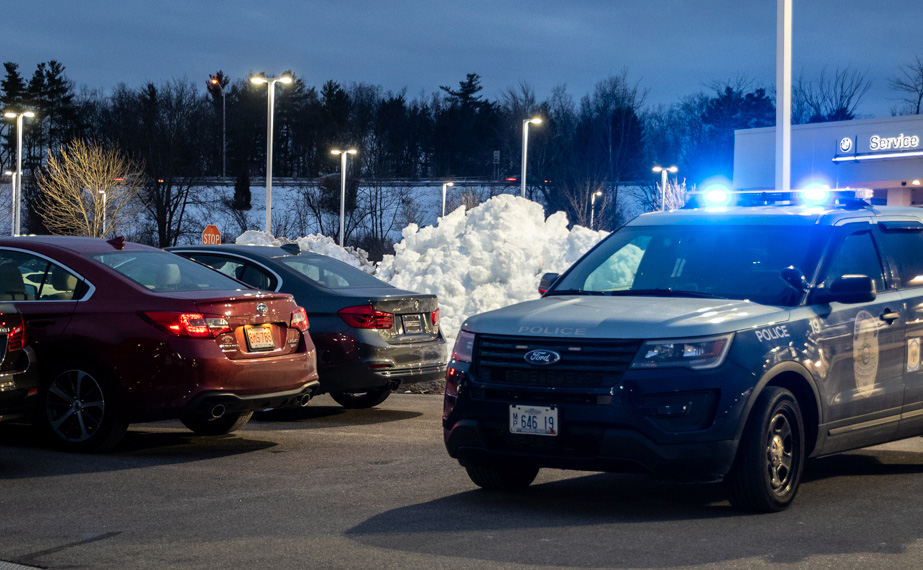 Photo by JEFFREY HASTINGS A Nashua police cruiser is parked behind the red Subaru that Thomas Murray allegedly stole in a Lowell carjacking Sunday, then left at Tulley BMW in Nashua when he took a BMW SUV from the lot and drove to Massachusetts, where he was shot and killed trying to escape police.

NASHUA – Sunday afternoon’s wild series of carjackings in Massachusetts and at a Nashua car dealership came to an end Sunday evening in Newbury, Massachusetts, when the suspect – identified as Dracut, Massachusetts resident Thomas Murray – was shot and killed by police as he tried to flee, according to authorities.

Officials said Murray, after reportedly carjacking motorists in both Boston and in Lowell, traveled to Nashua in the red Subaru sedan he acquired in Lowell after ordering the female driver out of the car and stealing her purse.

Roughly two hours later, around 5 p.m., Nashua police received a call of a reported carjacking at Tulley BMW on the Daniel Webster Highway. At this time, the suspect reportedly brandished a knife and stabbed a dealership employee in the hand, causing a relatively minor laceration.

Leaving the Subaru in the Tulley lot, the suspect, later identified as Murray, selected a BMW X5, a roughly $60,000 luxury SUV and fled the dealership.

Blodgett said dealership employees were able to help police keep apprised of the BMW’s location through the vehicle’s on-board tracking system. They watched as the system showed the vehicle get onto Interstate 95, then pull off the highway. It’s not clear if the system tracked the vehicle into the Newbury, Massachusetts gas station where the shooting occurred.

Massachusetts State Police said in a statement issued Monday that a state trooper and three Newbury officers located the BMW at the Prime gas station in the village of Byfield, which is part of Newbury.

State police said the officers surrounded the BMW with their cruisers and boxed it in to prevent it from fleeing. However, as they approached the driver, he “rammed the state police cruiser … in an attempt to evade capture,” according to the statement.

At that point, one or more officers “discharged a weapon or weapons … the suspect was struck,” state police said.

Still under investigation, according to Blodgett, is whether Murray is connected to the theft of multiple cars in Massachusetts and New Hampshire during the two days leading up to Sunday’s incident.