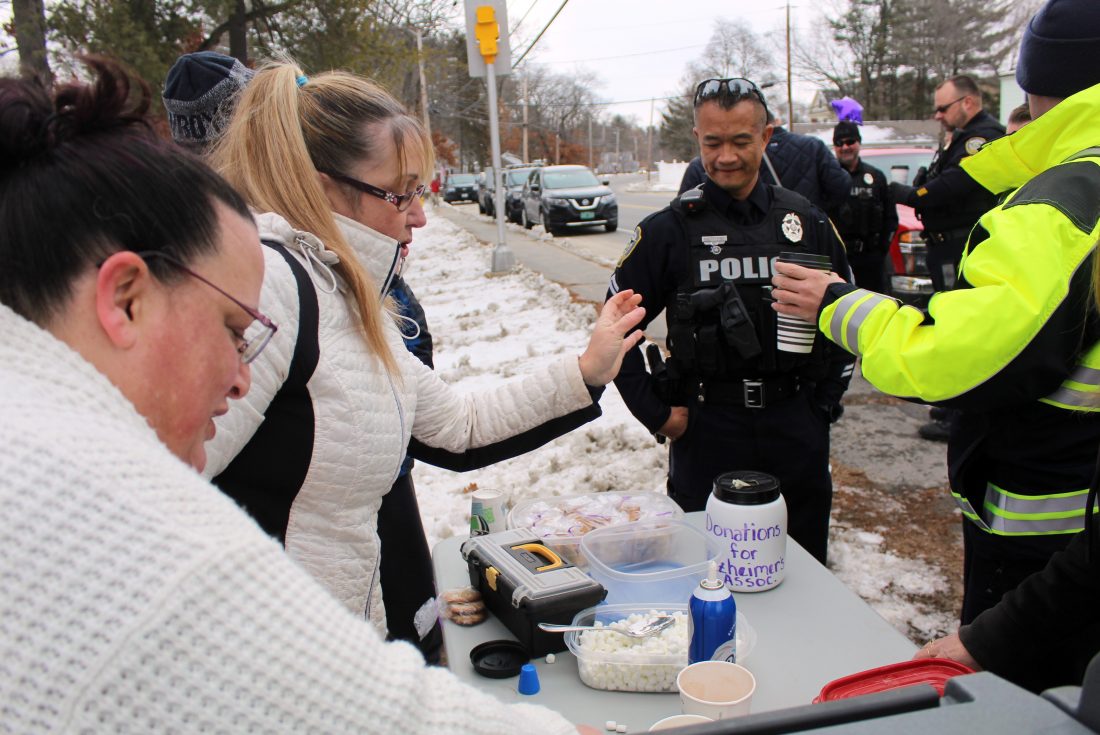 Telegraph photo by DEAN SHALHOUP Hudson police detective Pharith Deng waits his turn for a cup of hot cocoa from Melissa Blanchette and Kelly McCall, who served cocoa Sunday to scores of people who stopped by Big Papa's Cocoa Stand, the annual fundraiser for Alzheimers research. Deng was one of many Hudson police officers and firefighters who visited the stand.

HUDSON – At first glance, motorists driving past the Blanchette residence on Ferry Street Sunday morning probably thought they happened upon a major crime scene, or perhaps some type of incident that left a lot of people injured.

But it was all good: The cruisers, fire engine and two ambulances were parked along Ferry Street and Second Avenue so about a dozen police officers, firefighters and paramedics could partake in a cup of hot cocoa topped with marshmallows and whipped cream, or perhaps a chocolate cookie or two, at Sunday’s 11th annual fundraiser for Alzheimer’s research called Big Papa’s Hot Cocoa Stand.

The uniformed first-responders stood in line with civilians, ranging from neighbors and friends to extended family members and the occasional passerby, some of whom were more interested in helping out a cause than getting a cup of cocoa.

Tyler Blanchette was just 5, but was “eager to help his big brother” Brandon, 11 at the time, put together a fundraiser to benefit the Alzheimer’s Association after their great-grandfather, Donald S. Hindle Sr., whom they called “Big Papa,” was diagnosed with the disease.

They settled on the hot cocoa stand idea, which made its debut in February 2009 in front of their Ferry Street home.

With photos of “Big Papa,” who was 88 when he died in 2012, prominently displayed around the stand, donations flowed as rapidly as the boys and their volunteer helpers poured hot cocoa. Pretty soon the funds donated hit the $10,000, then $20,000 milestones. Currently, not counting the proceeds from Sunday, the cocoa stand has “raised upwards of $30,000 for the Alzheimer’s Association,” according to association spokeswoman Christina Lob.

As Brandon grew into his teens, graduated high school and entered the workforce, Tyler pretty much took over organizing and hosting the cocoa stand. But in August 2017, several months after another successful event was in the books, a most cruel and unexpected obstacle suddenly reared its ugly head, threatening not only the future of the cocoa stand, but Tyler’s health and well-being as well.

It was bad enough that Tyler was diagnosed with a brain tumor, but the fact it was determined to be cancerous threw the extended family for a loop.

After undergoing a regimen of treatment that included 33 doses of proton radiation and oral chemotherapy, Tyler’s mom, Melissa Blanchette, said she “is very happy to say he is doing great” these days and is looking forward to his high school graduation in June.

Melissa Blanchette added that she “is positive that ‘Big Papa’ is proud of what his great-grandchildren have accomplished.”