Fifth-graders celebrate by helping those in need 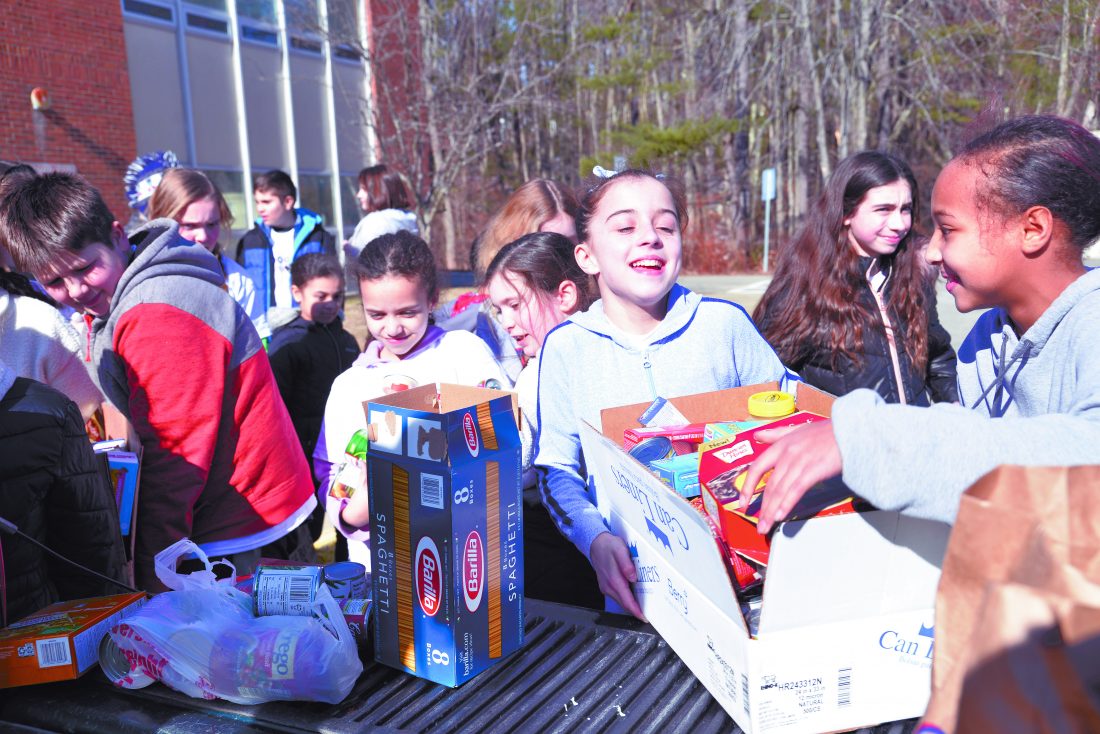 Telegraph photos by ADAM URQUHART Fifth-graders at New Searles Elementary School celebrate their 1,000th day of learning since they started school in kindergarten by collecting more than 1,000 items for donation.

NASHUA – Fifth-grade students at New Searles Elementary School experienced a visual representation of their academic achievements to date after collect 1,000 items for donation to the Nashua Soup Kitchen & Shelter as a way of celebrating their 1,000th day of school.

Dozens of fifth-graders helped by lugging boxes of food and other needed items to a pickup truck parked outside the school. The children worked together to lift these items into the bed of the truck for transport to the soup kitchen. While Wednesday marked the 100th day since the 2019-20 academic term began, it also marked 1,000 days of learning since the students started kindergarten.

As a way of celebrating this milestone, students decided to choose love and kindness by getting involved with a bit of community service. They set a goal of collecting 1,000 items to help those in need. The initiative began with just the 51 fifth-graders at New Searles, but as momentum built, it evolved into a school-wide project.

“I think it did gain momentum as it got going,” fifth-grade teacher Cathy Cornwall said.

Cornwall also said as the project commenced, the children began going classroom to classroom at the end of each day to remind fellow students to bring in items, determined to meet their goal. In the end, the children exceeded 1,000 items, including canned goods, pasta, peanut butter and much more. The kids also donned their special “1,000 Days Smarter” shirts, while working to fill the bed of the pickup truck with supplies.

Fifth-grade teacher Michelle Henning said the children began their day Wednesday morning with a writing assignment in which the students were asked if their teacher had said 1,000 things to them, what is it that needs to be quoted. The kids then had a chance to get creative and respond to what they thought of when thinking of what their teacher said to them 1,000 times.

“This day gives them that awareness as to how far they’ve come in their academic learning, but this also, the project, gives them a chance to think outside of themselves in how they can support the community,” Henning said.