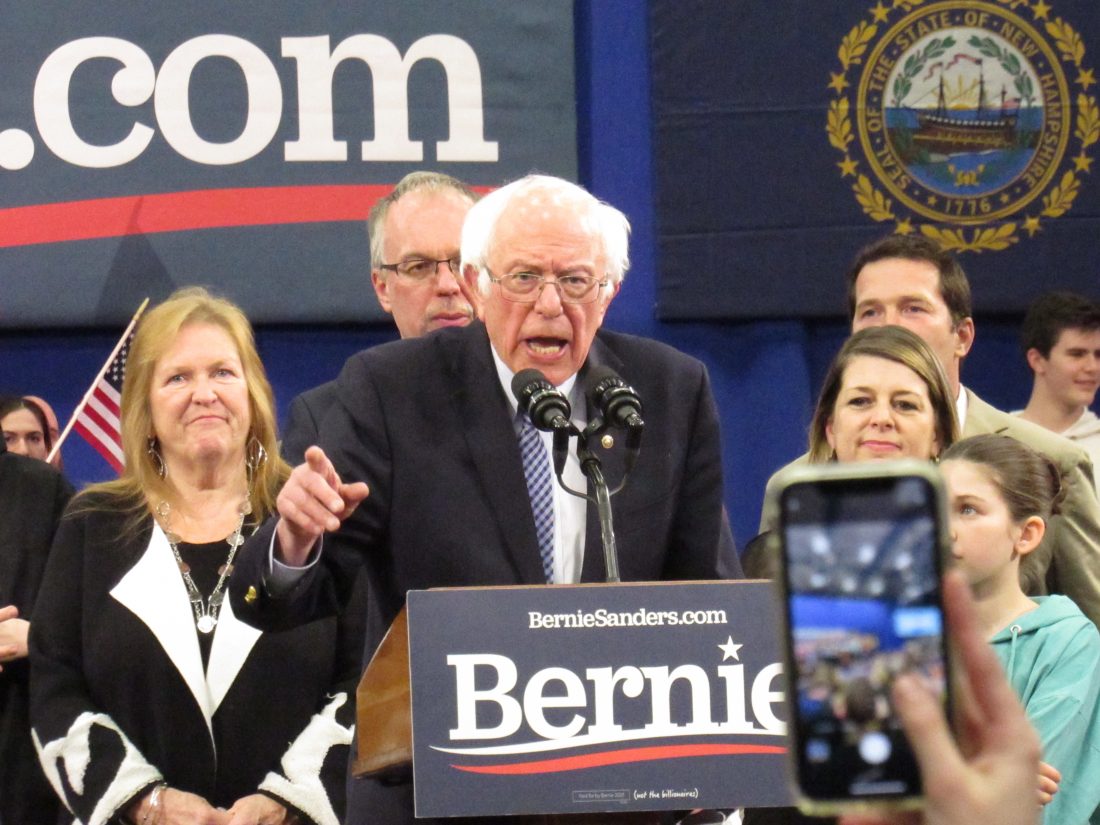 MANCHESTER – During his Monday rally in Manchester, President Donald Trump said there does not seem to be a clear favorite for the 2020 Democratic presidential nomination.

At the conclusion of the 2020 New Hampshire Democratic primary, this seems to indeed be the case.

“This victory here is the beginning of the end for Donald Trump,” Sanders said while speaking late Tuesday at Southern New Hampshire University in Manchester.

Although New Hampshire’s results were tabulated in a much more timely manner than in last week’s chaotic Iowa caucuses, it took Granite State election officials longer than anticipated to determine the winner.

Polls throughout New Hampshire were closed by 8 p.m., but the victorious Sanders did not take the stage to address supporters until 11:04 p.m.

“Tonight, I want to take my opportunity to express my appreciation and respect for all of the candidates we ran against: Pete Buttigieg, Amy Klobuchar, Elizabeth Warren, Joe Biden, and what I can tell you, with absolute certainty and I know I speak for every one of the Democratic candidates is that no matter who wins, and we certainly hope it’s going to be us, we are going to unite together and we are going to defeat the most dangerous president in modern history,” Sanders said in reference to Trump.

Although he thanked his competitors, Sanders also said, “We are taking on billionaires and candidates who are funded by billionaires.”

Several hours passed from the time the Stan Spirou Field House at SNHU began filling to capacity and the point at which Sanders finally took the stage. While waiting, the throngs of assembled Sanders supporters kept themselves busy by engaging in various chants, such as: “We are the 99%,” and “Health care is a right.”

Once a TV monitor showed Buttigieg speaking at around 10:40 p.m., the crowd began the chant: “Wall Street Pete.”

Sanders won the the 2016 New Hampshire Democratic primary with more than 60% of the vote, but ultimately lost the national race to eventual party nominee Hillary Clinton. He hopes this year will be different.

“This victory isn’t about me; it’s about us. Tonight is about what our supporters, volunteers and grassroots donors built in New Hampshire,” he added.

The self-described democratic socialist went on to emphasize some of his signature big-spending plans, which would cost U.S. taxpayer trillions of dollars. These include, but are not limited to:

• A mandatory single-payer health care plan commonly known as Medicare for All;

• Providing free public college for everyone; and

Sanders also vowed that he had the courage to “take on Wall Street,” as well as the “military-industrial complex.”

“Tonight, New Hampshire sent a message that working people are ready for a political revolution in this country. This is what it will take to defeat Donald Trump,” Sanders added.

The national focus now shifts to both Nevada, which will caucus on Feb. 22, and South Carolina, which is scheduled for a Feb. 29 primary.

Super Tuesday, so-named because a huge number of delegates are to be awarded that day, is set for March 3. Both California and Texas will vote on March 3, as will Massachusetts.