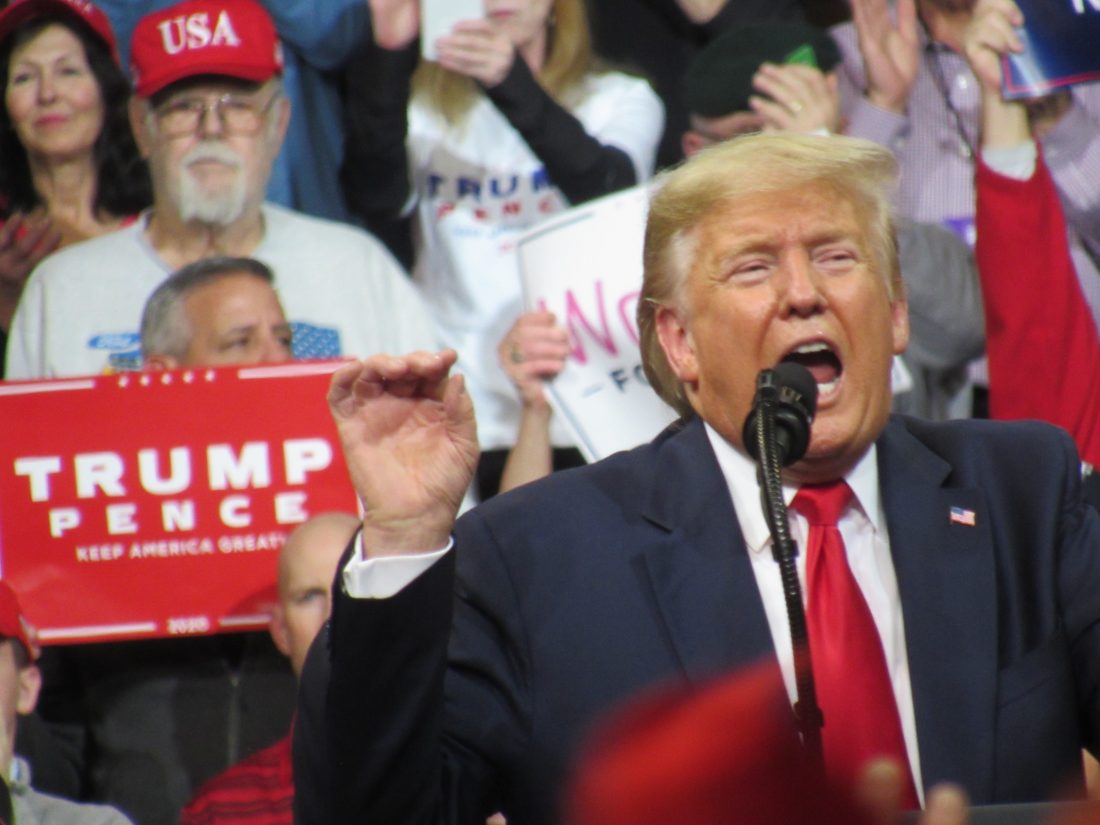 MANCHESTER – On the eve of New Hampshire’s first-in-the-nation presidential primary, President Donald Trump reminded Granite Staters he also is on the ballot today in his ongoing effort to “Keep America Great.”

“We are going to keep on winning, winning and winning,” Trump told the thousands of supporters jammed into Manchester’s Southern New Hampshire University Arena on Monday.

Inside the arena, music such as Guns N’ Roses “Sweet Child O’ Mine” and Michael Jackson’s “Beat It” blared from giant speakers as the crowd eagerly awaited the president’s arrival.

“We have more in this arena and outside of this arena than all of the other candidates, meaning the Democrats, put together and multiplied times five,” Trump added once he took the stage and got rolling.

Bolstered by his acquittal on impeachment charges in last week’s U.S. Senate vote, a confident Trump spoke in Manchester for nearly 60 minutes on everything from “illegal aliens,” to the new U.S.-Mexico-Canada Agreement, to health care, to Democrats’ recent struggles to tabulate votes in the Iowa caucuses.

Former Massachusetts Gov. Bill Weld is also seeking the Republican presidential nomination in New Hampshire today. Trump, however, spent no time at all talking about Weld.

“The Democrat Party wants to run your health care, but they can’t even run a caucus in Iowa,” Trump said. “They don’t know what they’re doing.”

Indeed, Sanders and Warren endorse the single-payer Medicare for All system, which some estimates show may cost taxpayers as much as $40 trillion over a decade. However, Biden, along with Pete Buttigieg and Amy Klobuchar, favors a somewhat cheaper public option expansion of the Affordable Care Act, more commonly known as Obamacare.

“We can forget globalism; we want to take care of our country,” Trump said.

As for immigration, Trump said illegal border crossings are falling and that progress is being made in the effort to secure the border with Mexico.

“The wall is being build, I will tell you,” Trump said, resulting in loud cheers and applause from the audience. “We now have built over 100 miles of wall.”

New Hampshire has not gone “red” for Republicans in the Electoral College since President George W. Bush won it in 2000. However, Trump predicted this would change this year.

“We are going to win New Hampshire in a landslide,” Trump predicted, insisting that registered Democrat voters are leaving their party “to join our movement.”

Trump said he believes this because the Republican Party is “the party of equal opportunity for all Americans.”

“We have cut more job-killing regulations than any other administration in American history,” Trump alleged.

Among the regulations cut were those affecting the fossil fuel and electricity generation industries, specifically the coal and natural gas industries. Trump chided efforts by Democrats to promote solar, wind and other renewable forms of energy, particularly wind.

Trump also spoke highly of law enforcement officers, claiming that Democrats do not. He specifically cited Democrats’ for their criticism of Immigration and Customs Enforcement (ICE) agents.

“We love our ICE officers. The Democrats don’t like them,” he said.

Trump expressed his enthusiasm for the new U.S.-Mexico-Canada Agreement, which he said “will bring jobs back to New Hampshire.”

The new trade deal is intended to replace the North American Free Trade Agreement (NAFTA) of the 1990s. Critics, including Trump, labor unions and many lawmakers, branded NAFTA a job killer for the U.S. because it encouraged factories to move south of the border, capitalize on low-wage Mexican workers and ship products back to the U.S. without tariffs.

During the 2016 campaign, in battleground states such as Ohio, Pennsylvania, Michigan and Wisconsin, Trump repeatedly blamed former President Bill Clinton for the numerous closed steel mills and factories found throughout the Rust Belt.

This likely helped Trump win all four of those states in the Electoral College over opponent Hillary Clinton, who Trump reminded everyone lived in the White House when NAFTA became law.

The new trade agreement, combined with building the border wall, Trump said, showcases a commitment to the American homefront.