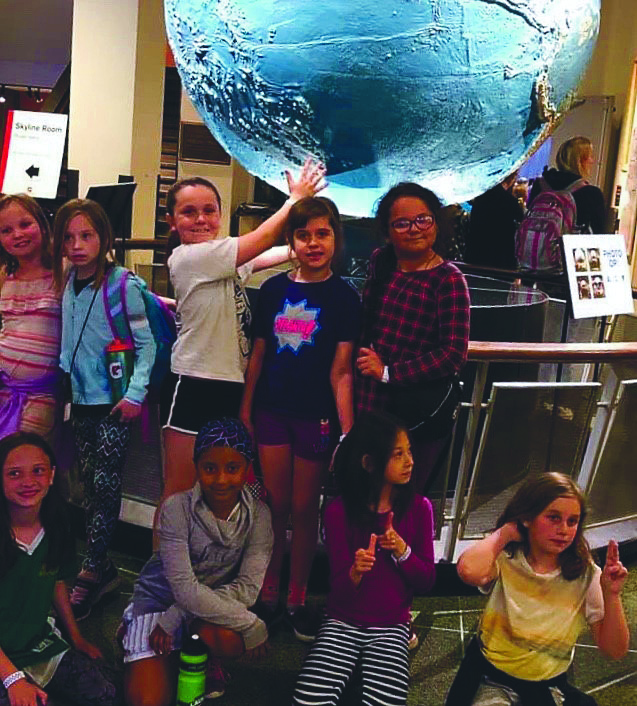 Courtesy photo Nashua Girl Scouts enjoy an overnight at the Boston Museum of Science in May.

NASHUA – Described as a “super Girl Scout” who is an asset to her troop, community and council, Jacie Crump of Nashua has been named the Volunteer of the Month for February by Girl Scouts of the Green and White Mountains, the council serving all of New Hampshire and Vermont.

Crump, 41, of Nashua, is a Gold Award Girl Scout, having been a member from Brownie level on up, earning both the Silver and Gold Awards in her earlier years – Girl Scouting’s highest honors.

Now, she leads Girl Scout Junior Troop 11126 for girls in fourth and fifth grades. This is her sixth year as a leader, while she has also been a Volunteer Service Coordinator for the council, providing help to the Girl Scout troop leaders in the Nashua area for the past three years.

“She has taken many additional trainings such as Foil Pack Cooking, Fire Building, Leave no Trace/Hiking and Basic Outdoor Living Skills so she can share the knowledge with both the troop and community,” said Anne Marie Yorio in Volunteer Support at the council. “She is organized, thoughtful and willing to help. She welcomes new ideas and takes on additional responsibilities.”

“I love interacting with the girls – being able to share my knowledge and passion for Girl Scouts,” Crump said. “It’s an opportunity for me to give back.”

Being an avid camper since before she can remember, Crump said she enjoys taking her girls outdoors and teaching them the skills they need for outdoor adventures. They’ve gone on a camporee, a few camping days, learning knife skills, fire building and knot-tying. Sometimes the camping adventure is indoors, as in an overnight to the Boston Museum of Science, but they have also stayed overnight at Camp Runels. They are looking forward to doing a troop camping trip where they will learn tent skills, and an overnight with the community at a camporee.

“I think by learning the skills of camping, they’re becoming more independent,” she said. “But, I think they did enjoy when we did the foil dinners. You don’t need a pot and pan or microwave. Just some foil. I think that’s one of those things they thought was really cool.”

Crump has taught her Girl Scouts the principles of leaving no trace behind no matter where they go, and has found them very respectful of the areas they’re in. “They ask me if I have gloves to pick up trash,” she said. “They want to leave things better than they found it.”

Her support as a Volunteer Service Coordinator means being available to the 20 Girl Scout troops and 72 leaders in the Nashua area, along with nine outreach troops, the total serving 338 girls.

“What I do is try to offer support to the leaders. Come and talk to me. I’m always on the lookout for things that are happening around Nashua,” she said.

Together, these troops have participated in camporees, World Thinking Day, a Blizzard Blast – a lock-in with workshops, helping other Girl Scouts with Take Action service projects, powder puff derbies, badge work, and more. Crump has also taken training in mental health, which is helpful not only to her as a role model and leader, but also in assisting others when girls may experience anxiety or bullying.

Crump encourages anyone thinking about becoming involved in Girl Scouts to do it: “Join up. It’s a lot of fun, and so rewarding to help the girls become leaders, innovators. It’s been one of the best experiences of my life.”