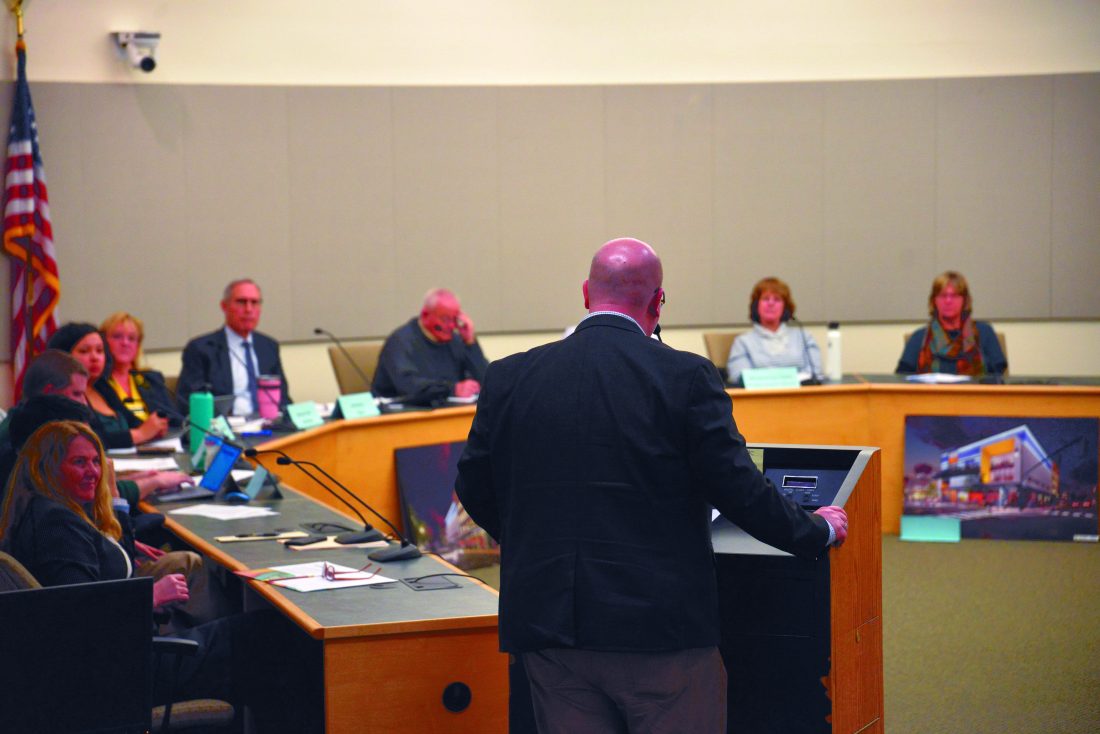 Telegraph photo by ADAM URQUHART Members of the Board of Aldermen listened to many people provide testimony both in favor and opposition of a resolution relative to the performing arts center Thursday night.

NASHUA – After considerable discussion during Thursday’s Budget Review Committee meeting, members decided to recommend an 18-month extension to a resolution relative to the performing arts center, which will expire in the event $4 million has not been raised in that time.

A special Board of Aldermen meeting was held prior to the committee taking up this resolution, where many residents turned out to provide their input on this amended resolution regarding $15.5 million in bonds for the PAC. Of those who expressed their thoughts to board members, it was pretty split among those providing testimony in favor and in opposition.

After lengthy consideration, Resolution 20-001 was further amended to recommend a deadline for fundraising, rather than lifting the previous two-year time frame all together. This extension allows for fundraising efforts to continue into next year. This resolution, as further Amended by Board President Lori Wilshire, is set expire on August 31, 2021 in the event $4 million has not been raised prior to that date.

Between both meetings, officials and residents spent four-plus hours in the Nashua High School North Board Room before this recommendation was made. Now, this amended legislation will go before the Board of Aldermen at their meeting on Wednesday. Simply put, the only change to this resolution was the addition of 18-months.

Chair of the Capital Campaign Committee with the PAC Deborah Novotny said the campaign is going really well. She said most capital campaigns take three to five years, and that those involved have done really well in the past seven months. However, a dollar amount relative to how much money has been raised to-date has not yet been announced as the quiet phase of the fundraising campaign continues. Novotny said the committee wants to have 70 percent of their goal before they announce that amount.

Before the special BOA meeting opened up to residents, Alderman Ernest Jette asked if it is reasonable that these announcements could occur by the summer, and Novotny said, “we hope so.”

However, two grants toward this project have been publicly announced recently. Last week, Bank of America awarded a $250,000 anchor grant for the project intended to anchor the $2.5 million private capital campaign and inspire additional contributions. Since that time, another bank has come forward in support of this undertaking. Nashua Community Arts, the nonprofit raising money for the PAC, announced this week that Enterprise Bank made a leadership gift of $100,000 in support of the project.

Officials have secured 30 pledges by meeting face-to-face with people and businesses as of last week. Novotny said they are following up with several others who are in different phases of their decision process, with several initial meetings with people coming up over the next two weeks. Additionally, 75 lead and top prospects have been identified that the committee needs to make contact with, and Novotny said that just scratches the surface.

“We’re ahead of all of our internal milestones that we set for our self, and we will continue to remain on course,” Novotny said during her remarks leading up to public testimony during the special BOA meeting.

“If a deadline is required, we do request an additional two years.”

Similarly, Director of Economic Development Tim Cummings made the recommendation that officials approve R-18-001 and allow for more time for the project and the fundraising to occur. Cummings also provided several project status updates.

“A cost estimate was recently done and it came in at $23.8 million,” Cummings said. “That’s what the project is looking like right now.”

However, the committee is striving to reduce that number down to $21 or $22 million, which Cummings said is the targeted goal. Three main sources have been identified for funding this project. The first is the $15.5 million of city general obligation bonds. Cummings said officials have identified New Market Tax Credits (NMTC) at $4.2 million, and then local, private fundraising capital at $2.5 million. Cummings also said that raises in at $22.2 million, and further explained the financial plan.

According to Cummings, this plan would be to use 70 percent of the project funding coming from the general obligation bonds, “20-ish” percent from the NMTC’s and then 10 percent from then capital campaign committee. While the committee works toward that 20 percent as a NMTC and that 10 percent as the local philanthropic, charitable capital, that serves as 30 percent of the total project funding. However, Cummigns said that 20 percent in NMTC’s is out of the committee’s control, and is something they will not really learn about until early summer, somewhere in the June or July time frame.

“There is a possibility at some point that we may need to revisit how to close that 20 percent gap in the funding plan once we hear from the New Market Tax Credit folks as to where things stand come early summer,” Cummings said.

Mayor Jim Donchess said the NMTC application was not successful because the community development entity (CDE) the city was working with did not get an allocation from the federal treasury, which allocates these NMTC’s to CDE’s around the country. In the last round, Donchess believes a couple hundred CDE’s applied to the treasury to get an allocation. The city’s CDE they were working most carefully with is Mascoma Savings Bank, who has gotten allocations in the past.

“We believe that had they gotten an allocation, we would have gotten the $4 million already, but only a third of the CDE’s who applied got New Market Tax Credits, and so Mascoma was not one of them,” Donchess said.

After that happened, Cummings and the consultant began working with other CDE’s, and Donchess said the city is kind of on their list, but not first. He said if other projects fell through, the allocation may be obtained from that last round. The next round will come in June or July of 2020, and officials are still working with Mascoma. Officials are trying to reach out to as many CDE’s as they can to get in line for as many CDE’s as they possibly can because that $4 million would be very important.

“This is a project that is designed to build a healthier economy for downtown and for the entire city,” Donchess said. “I can tell you the fact that we’re even thinking about, or looking like we’re going to do this is already creating interest from private sector parties who are considering investing in downtown Nashua because of this.”