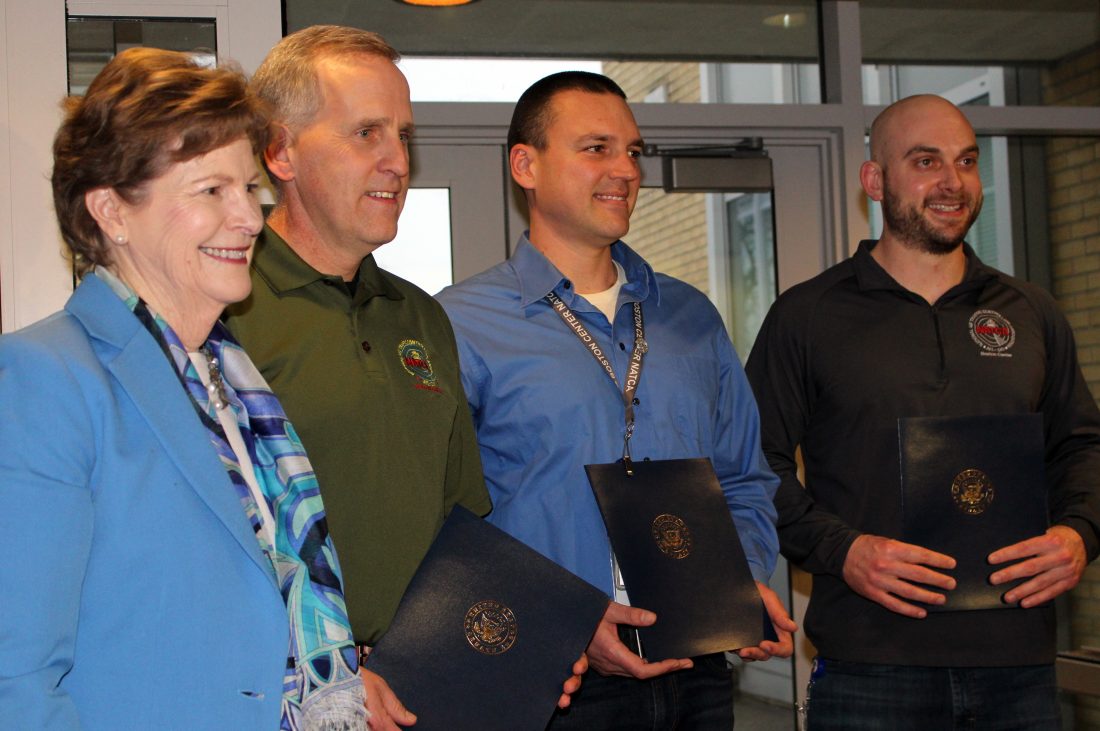 Telegraph photo by DEAN SHALHOUP Air traffic controllers Mike Jacobson, right, Neil Cospito, center and Jeff Aulbach stood with Sen. Jeanne Shaheen Thursday after she presented the men with copies of the Congressional record statement she delivered on the Senate floor honoring their actions that saved a pilot of an F-16 aircraft in November 2018.

NASHUA – Air traffic controller Mike Jacobson, a Nashua resident with five years on the job, was on his way to taking a break one evening in November 2018 when he heard a co-worker call his name.

Within seconds, Jacobson, Aulbach and a third air traffic controller, Neil Cospito, were calling upon their nearly 50 years of combined experience and their respective skill sets to find a way to deliver to safety an F-16 pilot who was dangerously low on fuel.

It’s a scenario rare enough that it was the first time the three men had heard of, nevermind faced, such an event, but it’s not what was going through their minds that evening.

On Thursday, Jacobson, Aulbach and Cospito, with members of their families present, were honored for “calmly and quickly resolving a complex situation in the snowy skies” above New England, according to the Congressional record statements that U.S. Sen. Jeanne Shaheen, D-N.H., presented each of them in an afternoon ceremony at the Boston Air Route Traffic Control Center on Northeastern Boulevard in Nashua.

Shaheen, who read the statement into the Congressional record in January, praised the men Thursday, commenting that “for people like me, who fly on a regular basis, it’s really reassuring to hear that our air traffic controllers have these kinds of skills and expertise.”

While Jacobson, Aulbach and Cospito have been honored at the national level by the National Air Traffic Controllers Association, and have received New England Archie League awards for safety, Shaheen said she felt it important that the men also be recognized at the state level.

In recalling the incident for reporters and visitors following Thursday’s presentation ceremony, Jacobson, Aulbach and Cospito said a little bit of luck also came their way that evening.

When the pilot, Vermont Air National Guard Lt. Col. Nate Smith, radioed the center and told Cospito he was diverting to Syracuse because the weather made it impossible for him to safely land at the Burlington airport, he also noted he had only 15 minutes worth of fuel left – and Syracuse was 15 minutes away.

Meanwhile, Aulbach and Jacobson were working busy airspace over northern and central New York when Cospito notified them of the emergency.

It just so happened that within the space Aulbach was working were two KC-135 tankers, which were on an unrelated mission, the men said.

“When I asked the pilot if he would be interested in getting a little refuel before heading for Syracuse, the answer was an emphatic ‘yes!'” Aulback said.

The tanker pilot was more than happy to help out, Aulback added, and soon the two pilots and three controllers were busy coordinating the refueling operation that allowed Smith and his F-16 to land safely at Syracuse.

According to a story about the incident posted on natca.org, the National Air Traffic Controllers Association website, Smith was quick to radio the center to express his appreciation.

“Thanks for your help today,” Smith said. “That was a nice job with getting the tanker involved.”

“No problem, my pleasure,” Aulbach responded.