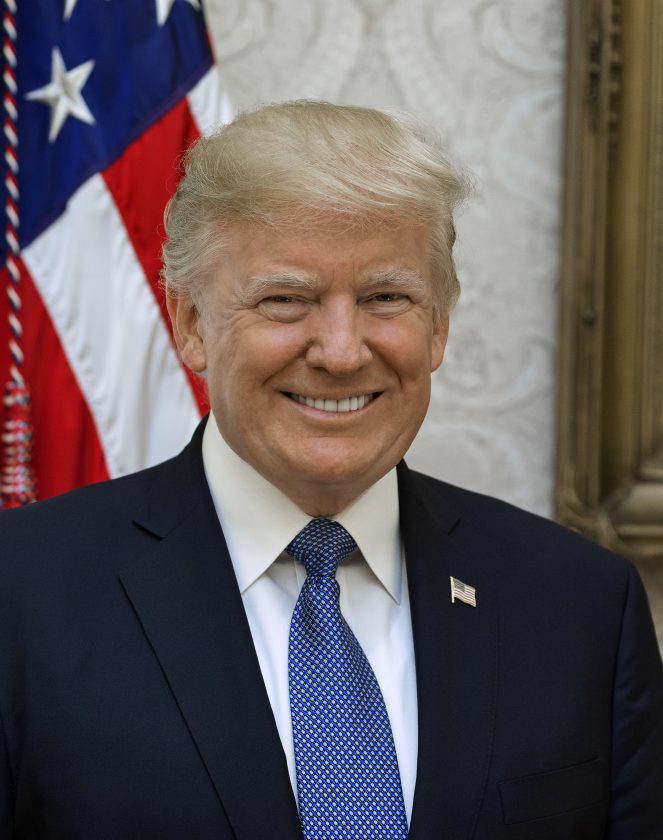 NASHUA – President Donald Trump is clearly not afraid of conflict, but in scheduling his “Keep America Great” rally for the heart of New Hampshire on the evening before the first-in-the-nation presidential primary, he seems to be truly taking the fight to the Democrats who hope to face him in November.

As Trump prepares for his 7 p.m. Feb. 10 re-election event at Manchester’s Southern New Hampshire University Arena, the battle for the 2020 Democratic presidential nomination continues toward a crescendo. With the Iowa caucuses now only days away and the New Hampshire primary in about two and a half weeks, candidates are unveiling endorsements and watching the polls.

Although former Vice President Joe Biden of Delaware continues as the national Democratic front-runner, his lead has diminished considerably compared to the levels he saw during the fall. Bernie Sanders of Vermont, on the other hand, continues climbing in both New Hampshire and national polls.

Recently, the two have clashed over the Medicare for All plan. Sanders acknowledges this will cost at least $20 trillion, but Biden said the cost may go as high as $40 trillion. Biden and Sanders also released competing ads regarding their positions on Social Security.

Thursday, Trump made note of the Sanders/Biden clash via Twitter: “Crazy Bernie takes the lead in the Democrat Primaries, but it is looking more and more like the Dems will never allow him to win! Will Sleepy Joe be able to stumble across the finish line?”

According to information provided by the Trump campaign late Thursday, Trump will return to the site at which he most recently rallied in August with a message of “Promises Made, Promises Kept.”

“Under President Trump, New Hampshire is booming with an unemployment rate of 2.6% – one of the lowest rates in the country,” Donald J. Trump for President Inc. Chief Operating Officer Michael Glassner said.

“With Trump reminding us of his broken promises to Granite Staters – from his refusal to lower prescription drug prices to his administration stacked with lobbyists to his efforts to end a woman’s right to choose – even more independent voters will be motivated to cast a vote in our primary and against Trump on Feb. 11,” she said.

“Americans are worried and the world is watching. It is time for us to rise up and fight,” Bill Shaheen said. “Winning the White House is only half of the battle. In order to change our course we must win the Senate. I’m supporting Joe Biden because he can do both.”

“When we choose a nominee, we need to pick the person who can unite the Democratic Party, unite the country, defeat Donald Trump, and work to heal our divided nation. Joe Biden has spent his entire career delivering Democratic wins and moving our country forward,” Keefe added.

Not to be outdone by Biden, Sanders announced multiple endorsements on Thursday.

“We overwhelmingly support Bernie Sanders for president because Bernie has the strongest policies when it comes to leveling the playing field for small farmers,” said James and Marley Stever of Generation Farm, a small, certified organic farm in Concord. “Bernie also has the most comprehensive policies to address the climate crisis and social and economic justice.”

“His progressive ideas will bring us together, help the economy, provide health care for all and defend our planet against climate change. We must elect Bernie Sanders to confront the challenges of our day and bring us into a future of health, true democracy and environmental stability,” Dr. Becky Mulkern of the Center for Natural Health added of Sanders.

“Elizabeth brings a wealth of experience and knowledge that she has turned into plans for the economy, health care, national security, reasonable gun legislation, and education as well as countless others. Elizabeth stands out as a woman of courage, intellect, and responsibility who will be the leader we need,” Rep. Dave Doherty, D-Pembroke, said.

“Elizabeth is the progressive leader we need to beat Trump,” Rep. Wendy Chase, D-Rollinsford, said. “She has shown that she will fight for all of us through her comprehensive plan to pass Medicare for All, combat the opioid crisis, and protect the rights and equality of people with disabilities. She is dedicated to building an America that works for all of us, has the record to prove she can get the job done, and that’s why I’m proud to support her.”

“Like Barack Obama before him, Pete is young, inspiring, brings fresh ideas to the table, and is motivated to win. Pete has the courage to lead us to a better future,” Kuster said. “By building a coalition of progressive Democrats, independents, and disaffected Republicans, Pete will win next November and lead our country to a brighter future for every American.”

“I’ve been around New Hampshire politics long enough to know how to spot a candidate with the grit, smarts, and pragmatism needed to win. Amy Klobuchar is the real deal,” Butler said. “She has been a leader in fighting for working families her entire career. She’s also a uniter, and someone that brings everyone to the table. That’s the kind of woman we need not only to beat Donald Trump, but to win big up and down the ballot in 2020.”