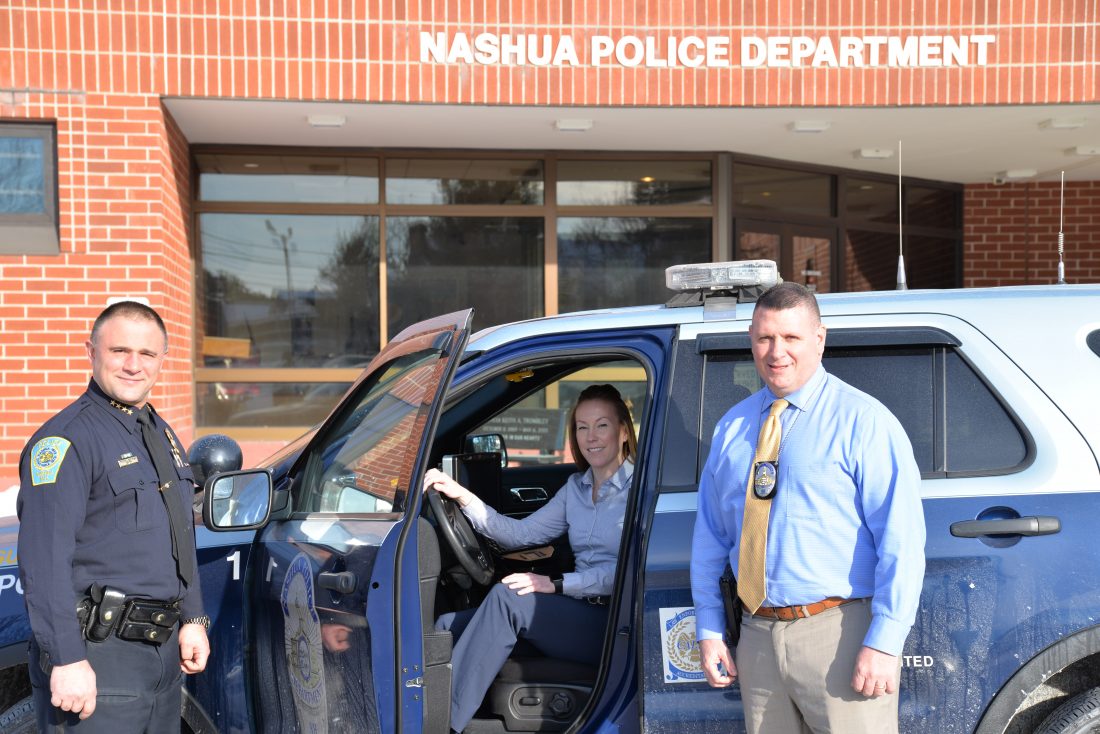 NASHUA – Despite offering a starting annual base salary of nearly $55,000, the Nashua Police Department is currently short 18 officers, but leaders hope a boost in recruiting efforts will help fill the vacancies.

Recruiting officers Julia Banks and Kevin Pucillo are tasked with finding and hiring additional officers so the department can reach full strength, which is considered 179 employees.

Police Chief Michael Carignan believes the department now has to take a different approach to recruiting, although they must do this without compromising standards of excellence.

“We’re not going to compromise on that,” Carignan said. “The people of Nashua deserve nothing less, so that makes it tougher, too.”

However, Carignan said part of the issue is there is a long road from the time someone is hired until he or she is actually allowed to go on patrol. New hires must complete much more than just the New Hampshire Police Academy to become a police officer. There is a series of testing, both written and physical, that individuals must undergo. In addition to that, there is also a series of interviews individuals must complete, as well as doing a polygraph and background check.

“From the time they take the initial tests, until the time they’re out on their own on the street by themselves, it’s almost a year,” Banks said.

Currently, the department has a certified officer in the field training office, and then another two in the academy.

Pucillo stepped into this new role as a recruiting officer in September, while Banks did the same in December. In the meantime, however, being down this many officers has affected the department.

“One of the biggest impacts is overtime – you’re forcing people to work overtime and more shifts, which has an impact on your budget,” Carignan said.

Carignan said the department has had to cut back on what they call Sector 16, which is an officer in the lobby available to take reports as people enter. This could include someone coming in to report a stolen wallet, for example.

Another cut has occurred in what is called Sector 1, which is a patrol officer whose primary objective is to drive up and down Main Street.

Since fewer people are out and about in the downtown area given the cold weather, the department has taken that one officer away for now, but will probably bring them back in the spring as temperatures warm.

Carignan also said officials had to make internal program adjustments as well, with cuts occurring in evidence management for example. There are still people doing this, but disposing of evidence properly takes time. He said officials cannot do it at this time.

“Those are what we’re starting with for now,” Carignan said. “We will not be filling a detective position until at least next fiscal year because of the management of the money.”

However, staffing issues are not a Nashua problem alone, or even just a law enforcement dilemma. Pucillo said the economy is good and offering a lot more options to people, especially in terms of those looking to work Monday through Friday jobs. As a police officer, weekend, evening and holiday shifts are just a matter of life.

Another factor making it difficult to hire involves the negative perceptions some now have toward law enforcement agencies.

“Honestly, the public’s perception of the police right now, I think, is the biggest thing,” Banks said.

“We’re pretty compatible with some of the (Massachusetts) towns in pay wise, but some of the towns just, unfortunately, blow us away,” Pucillo said.

The starting annual salary for a new officer at the Nashua Police Department is just short of $55,000, but that figure does not include holiday or any education incentives. Also, one’s level of educational attainment can lead to a higher salary.

If an individual is bilingual, there is another percentage for that. Right now, the department has four Spanish speaking officers, but Carignan is hopeful when it comes to hiring more minorities to better reflect Nashua’s diversity.

“One of my goals is to try to get a set of officers a little bit more reflective of our population in Nashua,” Carignan said.

He acknowledges the city’s large Latino and Indian populations, for example, and hopes to get a balance with some officers, and to even get some local recruits as well. However, the chief said that is not an easy thing to do.

“If we could attract some minorities coming out of the military too, that would be good,” Carignan said.

The department has been reaching out to the NAACP and various churches to make connections. Banks is also focusing on recruiting some people from the military. They have also reached out to military bases and different colleges to try to find new hires as well. In addition to these efforts, the department is also searching on Facebook, Indeed, while streamlining the application process on the website.

Pucillo said since he began in this position as a recruitment officer, numbers have steadily grown in terms of the those signing up for testing.

While officers work to overcome this challenge, the chief believes that in general, many industries are struggling to find qualified people to hire. Carignan said this is not specific to law enforcement.

“I think if you were to poll a lot of the police departments, they’re all struggling,” Pucillo said.

Information is available on the police department’s website, while Banks and Pucillo can be reached at banksj@nashuapd.com and pucillok@nashuapd.com, respectively.