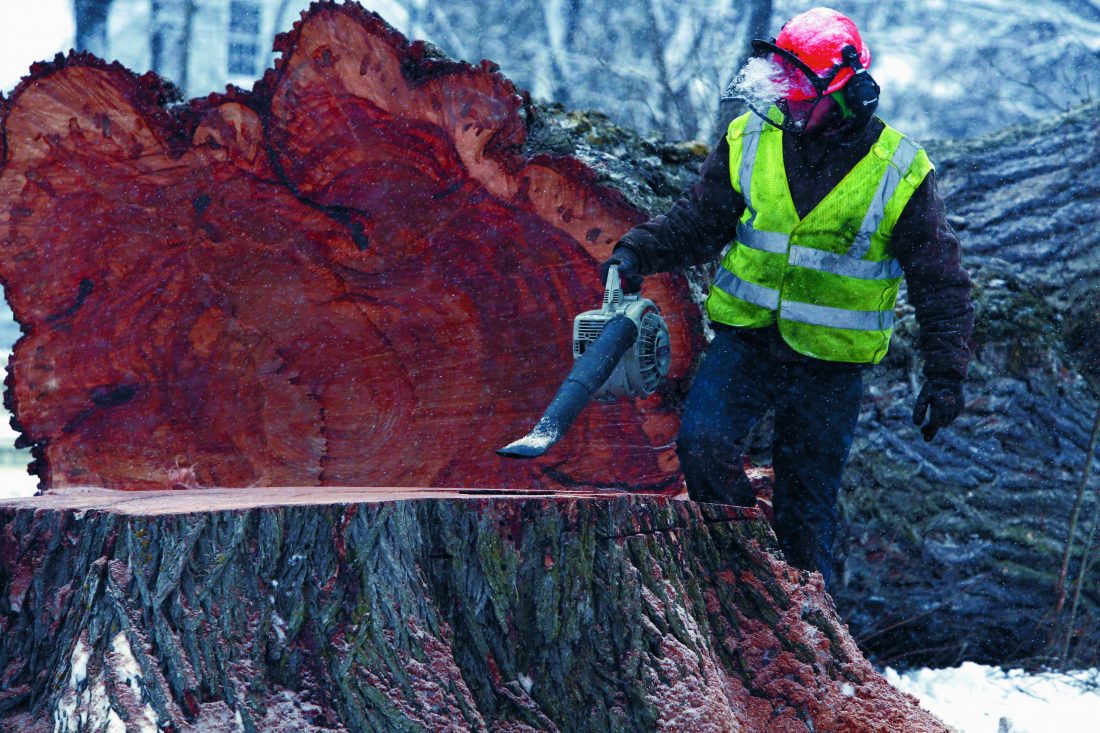 FILE - In this Jan. 19, 2010 file photo, a worker removes saw dust from "Herbie," the tallest American elm in New England, after it was cut down in Yarmouth, Maine. The tree, estimated to be 217 years old, was cut down after suffering numerous bouts of Dutch elm disease. "Herbie" may be gone, but he'll live on in cloned trees that are now being made available to the public. (AP Photo/Pat Wellenbach, File)

YARMOUTH, Maine (AP) — A massive elm tree nicknamed Herbie is long gone, but it is going to live on, thanks to cloned trees that are being made available to the public.

At 110 feet and more than 200 years, Herbie was the tallest and oldest elm in New England and survived 14 bouts of Dutch elm disease because of the devotion of his centenarian caretaker, Frank Knight, the late tree warden of Yarmouth, Maine.

The duo became famous after Knight spent half of his life caring for the tree, which he referred to as “an old friend.” Knight realized he couldn’t save the town’s elms as they succumbed by the hundreds to Dutch elm disease. So he focused his efforts on one of them: Herbie.

Over five decades, Knight oversaw selective pruning of Herbie’s diseased limbs, and applications of insecticides and fungicides. The pair became well known, both in Yarmouth and beyond, thanks to international news coverage.

But before Herbie was chopped down, the Elm Research Institute in New Hampshire worked with Knight to collect some cuttings from Herbie to preserve the tree’s legacy with clones.

The hope is that Herbie’s descendants will have some resistance to Dutch elm disease. But that remains to be seen.

“Like many cancer patients, he was a survivor. We wanted to make every effort to reproduce Herbie hoping his clones would prove equally resistant to Dutch elm disease,” said John Hansel, the 95-year-old founder of the Elm Research Institute based in Keene, New Hampshire.

The yearslong effort has created 1,500 mini Herbies. The goal is to create many more — hundreds of thousands more, he said.

“Herbie is our hope for the future,” Hansel said.

Hansel also devoted himself to preserving elm trees after they were wiped out by Dutch elm disease.

Elm trees once lined streets in towns from coast to coast. But all that changed with startling speed because of the Dutch elm fungus, spread by bark beetles, beginning in Ohio in the 1930s. Once afflicted, elms faced a swift and an all-but-certain death.

Working with the University of Wisconsin, Hansel helped to create and distribute about 300,000 “Liberty” elms that were based on trees from the Midwest. Those trees were named for Boston’s “Liberty Tree,” a giant elm.

Hansel shifted his effort to Herbie in hopes of creating a new standard bearer that’s better suited to the Northeast.

It’s been a painstaking process.

Researchers began clipping leaves from Herbie years before his demise. Researchers planted about 5,000 of clippings in pots before finally getting a single tree that took root.

From that, there are now 1,500 trees. That represents a critical mass to begin creating them in even larger numbers.

“I love the idea,” said Jan Ames Santerre, urban forestry program coordinator for the Maine Forest Service. “People are interested in big trees in general, but Herbie captivated people’s attention. It was a beautiful tree, and the idea that someone could re-create that in their yard or in their community is a very appealing thing to do,” she said.

The National Arboretum also took an interest in Herbie and took some clippings, as well. Some of those seedlings were planted in Maine, but they didn’t survive, Santerre said.

William Livingston, a professor at the University of Maine, said there’s a great legacy behind the Herbie name. But it’s also exciting to have trees that could have some resistance to Dutch elm disease, he said.

“There’s a chance that those trees have some resistance and will be in a position to survive,” he said.

The nonprofit Elm Research Institute is selling the trees.

The new Herbies are available now at $19.95 for a 1-foot tall tree, or 6-foot trees will be available for $114 for those who are willing to wait three years, said Yvonne Spalthoff, from the Elm Research Institute. The trees come with a 10-year warranty.