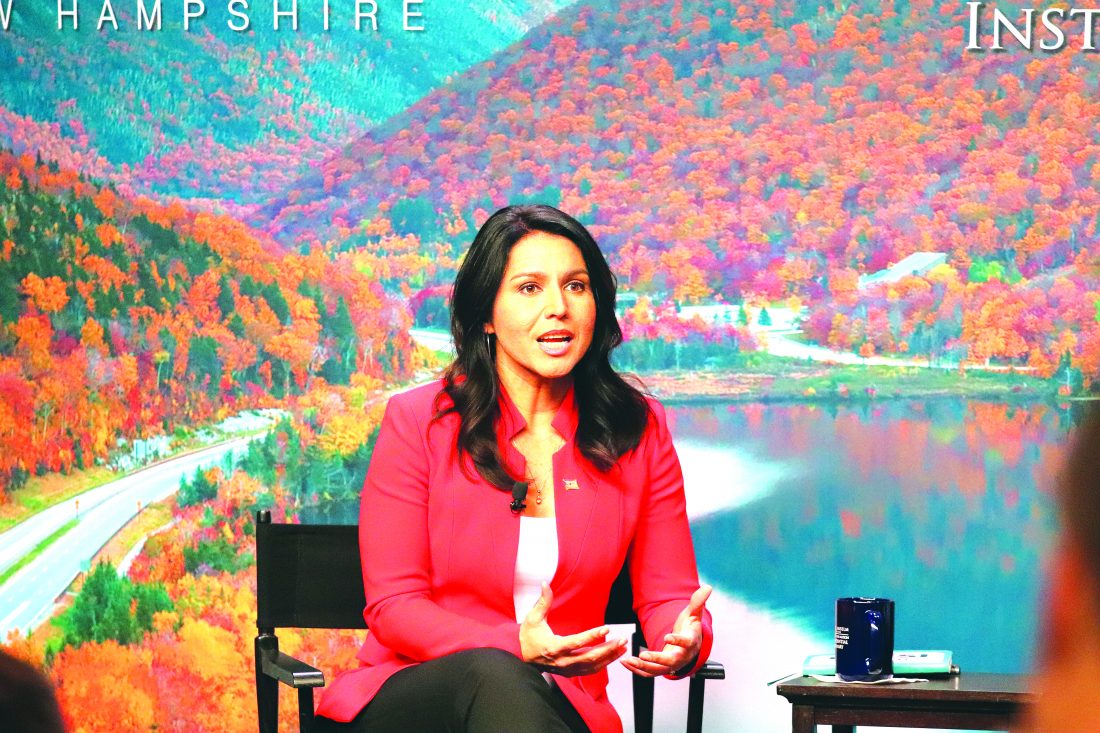 The intimate setting provided a forum for Gabbard to discuss hot-button issues, including the actions of President Donald Trump’s administration in Iran, Trump’s impeachment and the approximate national total of $1.6 trillion in student debt.

Gabbard continues to be critical of the conflict in Iran, and the way the situation has been handled by the U.S.

“This is really the pressing foreign policy that we as a country are facing right now,” she said, “as a result of the decisions of this administration. If I were president, immediately, I would rejoin the diplomatic efforts to get Iran back into the nuclear agreement. And what I would have done differently from Trump is not remove the U.S. from this agreement in the first place.”

Gabbard said full-blown war with Iran is now possible, while cautioning that she believes Iran is enriching uranium and as the means to develop a nuclear weapon.

“If we do not stop the escalation of war, with regard to our service men and women, we have to be very clear-eyed about what the cost of going to war with Iran would be,” Gabbard said. “We’re still at war in Iraq, in Afghanistan, in Syria, and the reality is, if we’re to have an all-out hot war with Iran, it would be far more costly in lives and in taxpayer dollars than we have seen with the wars in Iraq and Afghanistan. Diplomacy is the only alternative to war.”

Gabbard said she urges Trump to de-escalate matters and allow the parties to again negotiate.

Shifting gears, an audience member asked Gabbard to clarify her not taking a role in Trump’s impeachment. Gabbard chose to vote “present,” rather than “aye,” or “nay.”

“I took this decision in how I would cast my vote very seriously,” she said. “I went through the documents and evidence. And ultimately decided to vote the way that I did to take a stand for the center.”

Gabbard said the outcome resulted in the strength of one party, rather than it being an objective examination of circumstances.

“Our country is terribly divided,” she said. “Donald Trump has abused his power. The reason I voted present is to make sure that we as voters will have the opportunity to make that decision ourselves to remove him from office in November.”

In lieu of voting for impeachment, Gabbard said she instead introduced a censure resolution. She said this included some of the elements of the articles of impeachment, but expanded it, “to include many of the other abuses of this president.”

Another audience member posed the question of what Gabbard would do about the climate crisis and America’s reliance on coal and fossil fuels.

“I think now that the growing attention that we’re seeing on the environmental fronts that we face, the negative impact of many of these fossil fuels and dirty sources of energy are having on our environment, are causing us all to look at it,” she said. “I’ve introduced legislation in Congress that looks at this in a serious way, and making sure our country can, step-by-step, make that transition off of fossil fuels and take the dollars and resources that we are dedicating there now and instead redirect them toward really investing in innovation and technology available in clean renewable energy resources.

Gabbard said advancements in clean energy sources continue to grow and will allow the U.S. to develop and create renewable energy sources at a much better economic cost.

“It’s actually become cheaper for us as Americans,” she said, “to be able to generate this clean, renewable energy here at home than it is to rely on the fossil fuel energy of the past.”

She said as president, she would also rejoin the Paris Climate Accord.

On the subject of student debt, moderator Victoria Adewami asked about student loan debt in New Hampshire, which is the highest in the nation at an average of $34,415 per graduate. She spoke of a young woman in Hampton, who was turned down for a credit card due to the amount of student debt she faces.

“There are a few approaches that we need to take,” Gabbard said. “We’ve got to get to the root cause of it. Because even if I were to stand here and tell you today, ‘Hey, anyone in this room with student debt, I will cancel it.’ That’s great for you, but what happens to the rest of your classmates who are graduating next year, or the year after, or five years later?”

Gabbard said the major problem is that education costs increase each year without a commensurate outcome for graduates.

“We’re not seeing that graduates are getting paid more in a job of their choosing” she said. “People are, more often than not, having to get jobs in professions not in their training or choosing and getting paid less than they at hoped. So, how do we bring down the cost of education?”

“You take the test, and pass the test, and there go three credits,” she said. “That just saved you a whole bunch of money. There are a lot of options there that I think we need to expand. I also think we need to shift our focus as a society, away from setting an expectation from every single person graduating from high school must go to college. It’s wrong. It’s burying people in debt.”

She added, “If you want to become an apprentice, go for it. If you’d rather go and immediately learn a vocation, and get into a different line of work, go for it. And if you’re one of these amazing people graduating high school and wants to create a start up and get your own business running, go for it. We need, as a society, need to change the expectations of what success looks like. So, that we’re best able to encourage the pursuit of opportunities for our young people without needlessly burying people in debt.”