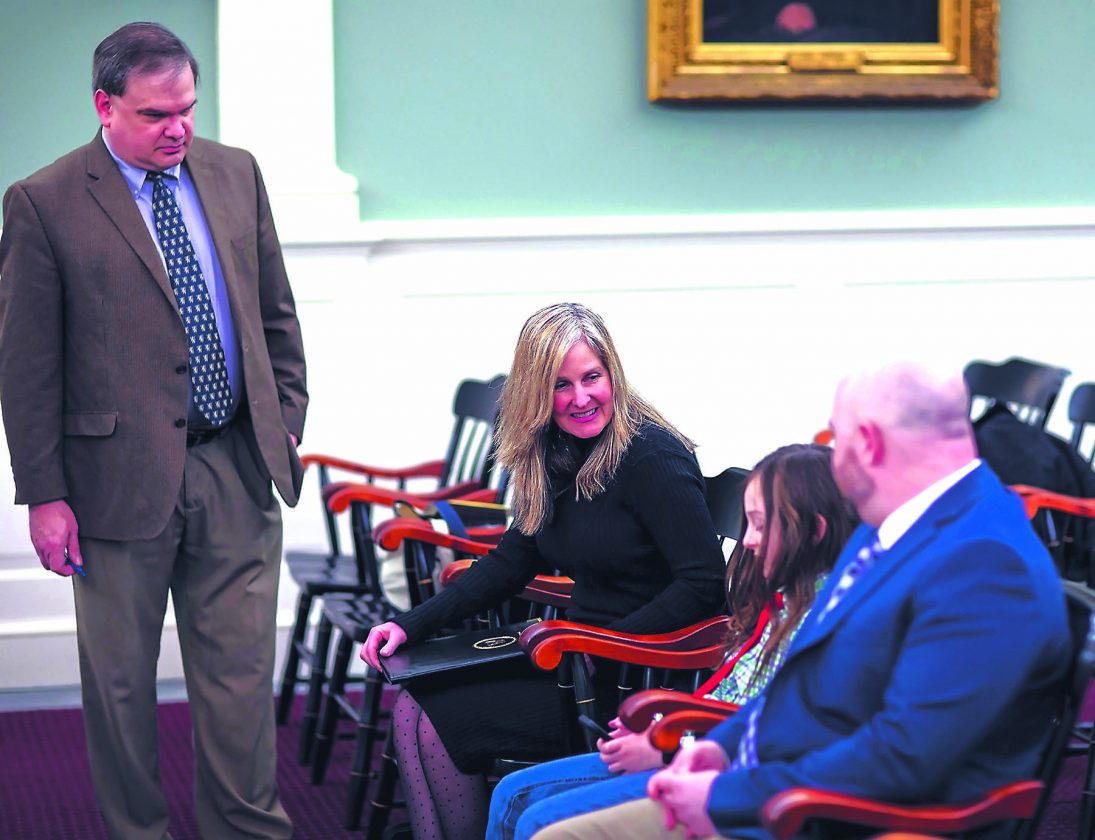 Kate Frederick waits with her son Devon, and her husband Brad, right, as they await the Supreme Court to start on Tuesday, January 14, 2020 in Concord, NH. Frederick's lawyer, Benjamin King is at far left. Frederick was fired from her former employer, the New Hampshire Department of Health and her wrongful termination case has played out for years in local courts and at the State House. (Geoff Forester/The Concord Monitor via AP)

It’s been more than seven years, Katherine Frederick says, since she was fired from her job at New Hampshire’s Department of Health and Human Services over breastfeeding, and she still hopes to take her case to trial.

“It’s not going to change what’s happened,” Frederick said after her lawyer argued an appeal of her case Tuesday before the state Supreme Court. “But I think it’s really important to look at what’s wrong in New Hampshire and see if we can make it better.”

In 2012, Frederick worked as a child support officer in the department’s office in Conway and was fired that September over, she said, whether, when and where she could breastfeed her newborn son, Devon, now 7.

The department said Frederick was terminated after she failed to return to work after exhausting her leave under the Family and Medical Leave Act, according to court documents.

Frederick, who now lives in Strafford, Vermont, filed a wrongful discharge lawsuit against the department in 2014 in federal court. Her case was dismissed in 2017 after a judge ruled that the department was immune from the lawsuit.

Frederick refiled her lawsuit in New Hampshire Superior Court in 2018, and the department challenged it again. A judge initially ruled that the case should go forward. The state moved for reconsideration. In February, the judge dismissed the lawsuit, saying it was barred by a three-year statute of limitations.

“The trial court got it right the first time,” Frederick’s attorney, Benjamin King, said before the state supreme court justices.

Anthony Galdieri, of the attorney general’s office, also argued on behalf of the Health Department on Tuesday that as a state employee protected by a collective bargaining agreement, Frederick would not have the ability to bring such a claim.

She was limited in her remedies, including the ability of her union to file grievances, as well as to bring a charge of unfair labor practices before the state Public Employee Relations Board, Galdieri wrote in court paperwork.

Frederick has worked on legislation in New Hampshire strengthening breastfeeding rights. She is a student at the Vermont Law School, where she is working on a master’s degree in restorative justice and hopes to attend law school afterward.

Frederick said she had spoken and corresponded with several people in her case, including Anita Hill, the law professor who in 1991 accused then- U.S. Supreme Court nominee Clarence Thomas, her former supervisor, of sexual harassment.

“She was extremely encouraging and compassionate,” Frederick said.

“They told me at the time, ‘Nope,'” Frederick said.