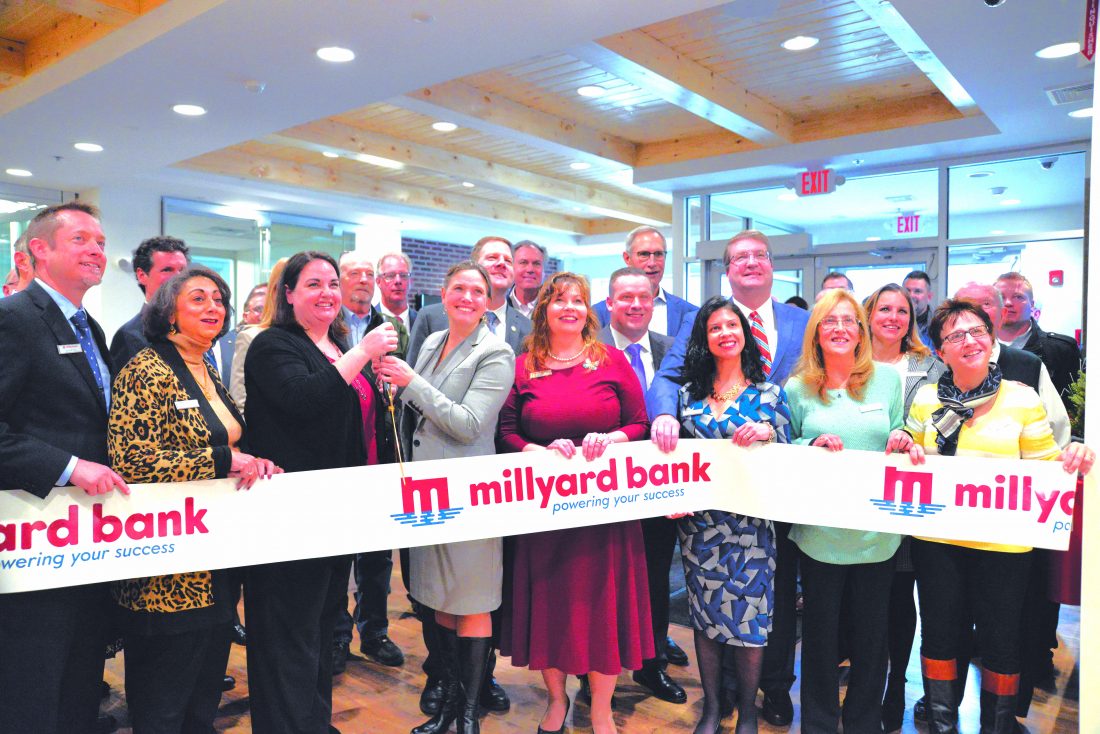 President and CEO G. Frank Teas is familiar with banking in Nashua, and this is not his first time offering banking services to the community. He is a longtime banking executive and Nashua native. With experience under his belt, this new journey is one he eagerly anticipates. He looks forward to serving the needs of business owners, professionals and others in southern New Hampshire. Millyard Bank is located at 57 Northeastern Blvd., and had a soft opening on Dec. 23. However, the facility’s lobby filled with dozens of supporters to kick things off Tuesday morning.

“We want to grow the bank slowly, steadily and relevantly,” Teas said.

CBTBE Corp. is the seed-company formed in May 2018 by a group of Nashua-area business leaders to lead the bank’s development. Officials received financial commitments from more than 200 people through a private offering, amounting to more than $20 million.

Millyard Bank also received conditional approvals from the Federal Deposit Insurance Corp. as well as state officials during 2019’s third quarter. The bank was capitalized with more than $20 million in equity by more than 200 local shareholders. It now employs 13 full-time staff members, along with 10 directors. With community in mind, this new bank also features what is called “The Boiler Room,” which will be used for educational opportunities for the community.

“A local bank is something that’s very important to the community because, and I know this is Frank’s intention, and really, mission, is to focus on small business growth, medium business growth, providing credit and capital to the businesses that we need to add jobs and boost our local economy,” Mayor Jim Donchess said.

The governor also said New Hampshire is top state in the entire Northeast for migration. Sununu also said the state is now a premier destination for millennials.

“We’re that tax-free suburb of Boston, and Boston is a great economic engine,” Sununu said. “It’s a wonderful place, a cultural center. We can’t compete with that in many ways, but we crush it in so many others.”

While Sununu cited economic success in New Hampshire, Millyard Bank will work to further boost those strides taken by local businesses by being a predominantly commercial bank on the loan side. Teas is the former president and CEO of The Nashua Bank, which opened for business in October 2007, capitalized with about $12 million. Officials agreed to sell the bank in 2012 to become a division of Lake Sunapee Bank. This company later became part of Bar Harbor Bank & Trust.

“Like The Nashua Bank, we believe the Millyard Bank will be well poised to handle downturns in the economy, and be there for borrowers and depositors alike,” Teas said.