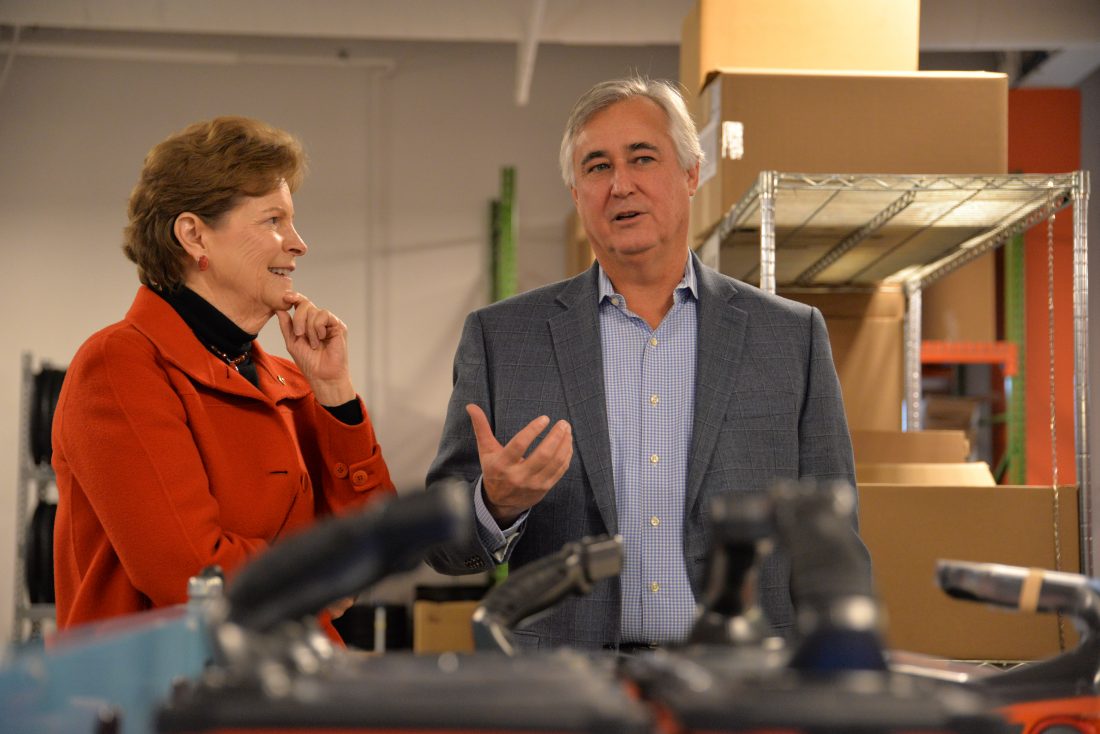 “I think, sometimes, it’s surprising for people to find out that the world’s leading manufacturer of ground penetrating radar is based right here in Nashua,” Geophysical Survey Systems Inc. President Christopher Hawekotte said.

Hawekotte greeted the senator upon her arrival, leading her along a tour of the Nashua-based facility. GSSI is a world leader in the development, training and use of GPR. The manufacturing company produces technology used to detect and map the Earth’s subsurface. It is a beneficiary of the Small Business Administration’s initiatives, including the State Trade Expansion Program (STEP). Shaheen helped create the STEP pilot program in 2010 to help small businesses enter new markets, access export financing and attend trade missions. The program aims at increasing the number of small businesses that export and enhances the value of goods exported by the small business sector. More recently, the program was fully authorized by Shaheen’s small business trade amendment, which was signed into law in 2016.

“We’ve actually used the Commerce Department programs and the state programs quite a bit to expand our international business,” Hawekotte said. “Gold Key program, STEP program, have been very helpful in breaking into new markets.”

About half of GSSI’s business comes from outside the U.S., and they were recently recognized by the Commerce Department for sustained growth in exports. In 2019, the company received the “E” Award from Secretary of Commerce Wilbur Ross.

GSSI moved to Nashua from its Salem location in 2015, and will celebrate its 50th anniversary in February. Since making the move to Nashua, company officials have continued hiring additional employees, with 86 people now on the force.

The company produces technology such as the StructureScan Mini XT, for example, which Shaheen got to see up close during her tour.

While the senator stopped by the facility on Monday, GSSI officials also introduced a new product during a conference in Washington, D.C., which is targeted at doing pavement density measurements. This is an innovative technique for helping Department of Transportation officials understand the quality of pavements as they are being installed with the goal to extend the life of the roads.

During her time as New Hampshire governor several years ago, Shaheen worked on international trade. Now, she is working to try to help others get into those international markets. Shaheen believes one of the things that has been helpful has been the STEP program, which is a federal endeavor to provide grants to states to help companies such as GSSI get into those markets.

In addition to that program, another initiative she highlighted is the United States-Mexico-Canada Agreement, which is meant to serve as an updated and more favorable alternative to the 1993 North American Free Trade Agreement (NAFTA).

“We expect it to come to the floor some time in the next couple of weeks,” Shaheen said. “I came out on Friday in support of it. I think it’s something that we should pass, and hopefully it will help create jobs and help companies like yours.”

Monday, Shaheen highlighted another area in which where companies can use some help: Finding skilled workers.

“First of all, we’ve got to look at what we can do about student loans,” Shaheen said. “We can’t saddle the next generation with loans that take half of their career-life to pay back.”

The senator said one thing the government could do right now is to reduce the interest rate on student loans. She believes addressing this issue could have a huge boost to the economy. This is because some saddled with significant debt often delay getting married, having kids, buying a house and making big investments.

The senator said when she was going through high school, most people thought they had to get a college education, which was portrayed as the ticket to a better life. While a lot of people have taken that path and gone on to pursue higher education, some have not realized the opportunities they expected when embarking on that educational journey.

“Higher education is important, but we’ve got to expand how we think about it,” Shaheen said.

In Washington, D.C., Shaheen is co-sponsoring an effort to allow Pell Grants to be used for academic work such as certification. However, at GSSI the company is constantly trying to attract skilled employees, whether that be engineers or other positions needed to run the business.

Company Vice President Finance and Administration Edward Ponto said they are optimistic that the business will continue to grow and expand, and that they can find talented workers needed in New Hampshire to help them achieve those goals.

“We offer tuition assistance to try to build those employees,” Ponto said. “If they don’t have the skills today, our company offers a tuition reimbursement plan to allow people to go back to school and acquire those skills at the expense of the company.”