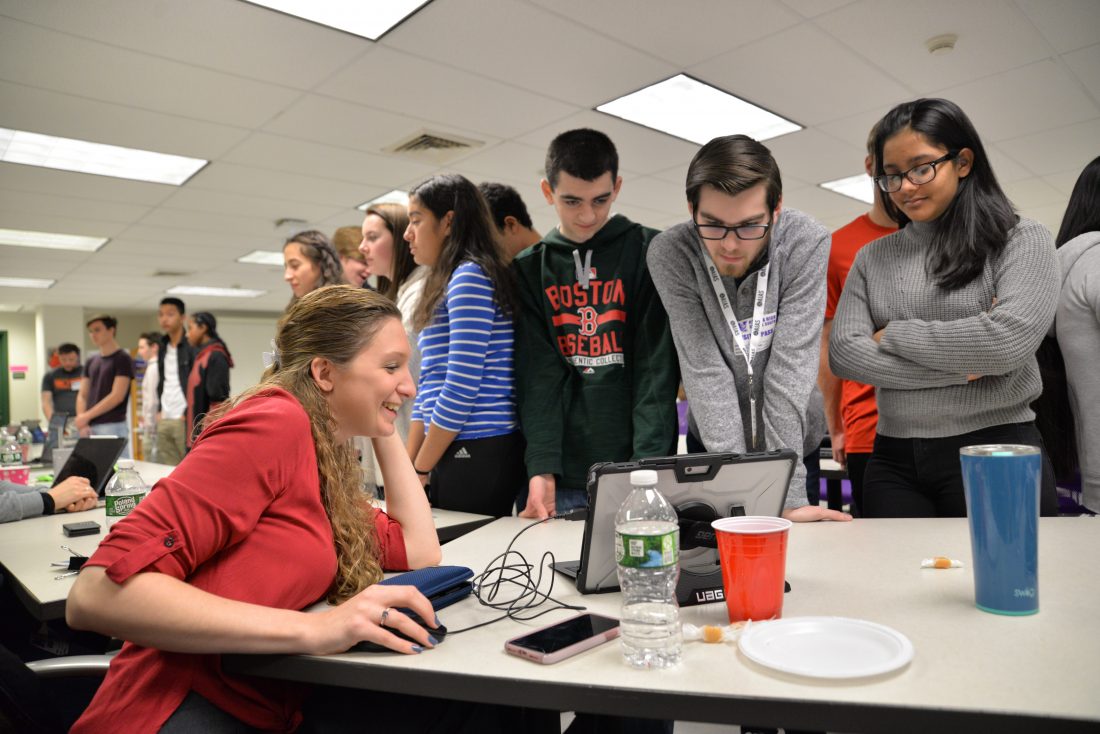 Course instructor Lenny Harrison said the turnout this year was the largest since the event began, as 18 alumni returned to share how their experience in this program as high school students prepared and benefited them as they moved forward.

About 45 current CADD students participated in this event, as they had the opportunity to ask alumni questions to learn more about what may lie ahead for them after graduation. The alumni who returned to speak with current CADD students are established in their professions, or are currently attending college. One alumnus is involved with project management, while another is working on a bridge reconstruction project, for example.

The event served as a sort of in-school field trip, as participants gathered for breakfast around 7:45 a.m. From there, introductions were given before a panel discussion. Students then had a chance to learn about what each alumnus is involved with during a break out session. This allowed students to walk around and connect with multiple alumni. The event concluded with a lunch around 12:45 p.m. Since this event began, it has grown to offer two dates of alumni events: One day before the holiday break and one after it.

After Alumni Day, Harrison planned for his current students to reach out to some former students to ask any additional questions they may have. Harrison also said reaching out afterward in such a way has proven, for some students, to get the opportunity for a job shadow.

Typically, students involved with CADD start as juniors, although they can begin their sophomore years and take it a third year as an independent study session as seniors. While involved in the program, students perform two-dimensional drafting and hand-sketching, as well as 3-D modeling. Harrison said students are also learning about assemblies, detailed drawing and 3-D printing, which he also said is premier in today’s industry. Students from both city high schools, and occasionally from those outside Nashua, participate in the program. Each year, roughly 50 students are involved with CADD.

“Lenny’s program is very successful,” Director of the Nashua Technology Center South Director Mike McQuilkin said. “They compete in SkillsUSA every year, a CTE (Career and Technical Education) competition, and always do very well. He’s very proud of his program and I think it’s good for former students to come back and show off where they’re at.”

He believes it is great for Harrison’s current students to hear all of these success stories and how they can get into a career they enjoy, actually using skills the skills they have learned and translating them into their career. One of Harrison’s alumni who was able to translate those skills into her professional career joined the event, as she has since its inception.

Jessica Welsh graduated from Nashua High School North in 2010, and went on to complete her bachelor’s and master’s degrees. She now works at the CUBE 3 Studio headquarters in Lawrence, Massachusetts. She is a job captain there, as she designs and oversees the construction of buildings.

At work, she uses a software called Revit. During the Thursday event, she showed students a Revit model during the break out session. Welsh said her time in the CADD program definitely benefited her, especially in terms of time management and gaining Revit knowledge.