Democratic-controlled N.H. Legislature back to work 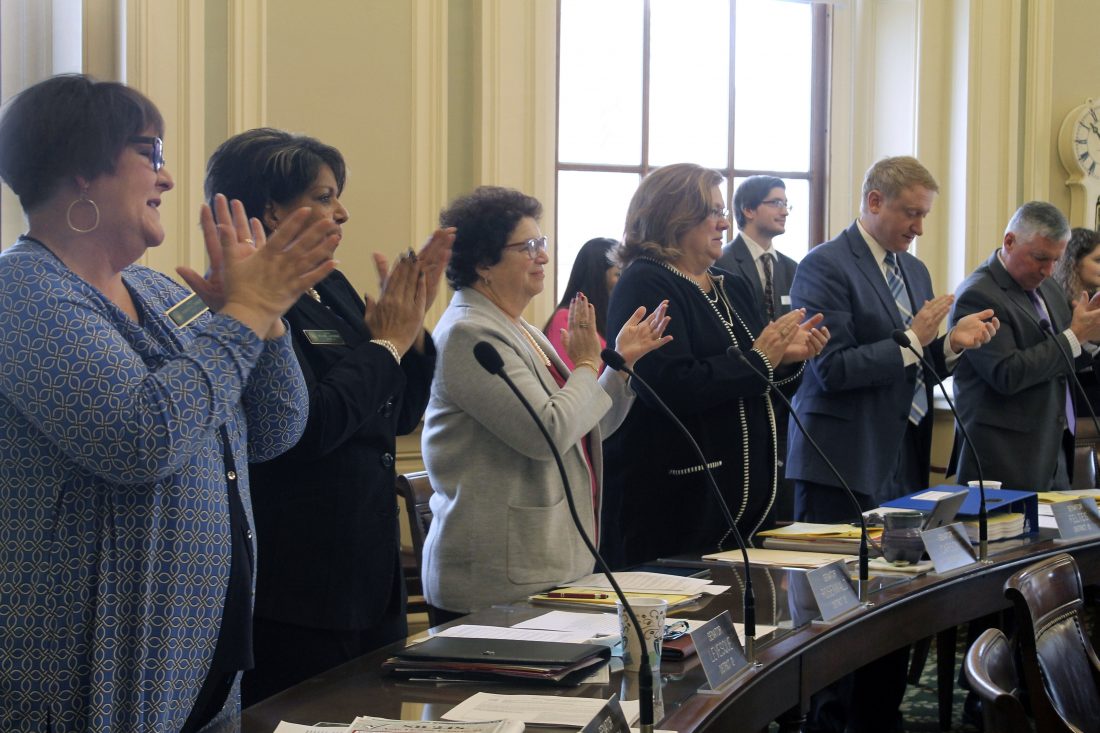 State Senators applaud in tribute to long-serving New Hampshire Statehouse staffers Wednesday, Jan. 8, 2020, at the Statehouse in Concord, N.H. The House and Senate returned to for the first day of their new legislative session, spent the time dealing with more than 150 bills retained in committees from last year. (AP Photo/Holly Ramer)

CONCORD – It did not take New Hampshire legislators long to dive into divisiveness upon their 2020 opening on Wednesday, as the Democratic-controlled House passed a so-called “red flag” law that would allow guns to be confiscated from those considered dangerous.

The 201-176 vote on House Bill 687 moved New Hampshire a step closer to joining 17 other states and Washington, D.C., in passing such laws.

“I believe we can all agree that firearms in the hands of dangerous people are a threat to public safety. It’s time now to address that threat and put an extreme risk protection order in place here at home,” Rep. Nancy Murphy, D-Merrimack, said. “Let’s show the people of New Hampshire we are serious about public safety.”

The bill’s sponsor, Rep. Debra Altschiller, D-Stratham, read a letter from Dr. Margaret Tilton, of Exeter, who spoke at a public hearing last March about the death of her 23-year-old son, George.

After struggling with depression for years, she said, he bought a handgun in 2016. That time, police were able to persuade him to surrender the gun, but he bought another one in 2017 and three weeks later killed himself, she said.

“I told his story, our family’s story, here in this chamber. And afterwards, I felt I had betrayed my son’s privacy for nothing. George would have never wanted me to share his struggles publicly, but I felt I had an obligation to other families,” Tilton wrote. “Please, have the courage to vote yes for this legislation. You will give some nameless, faceless parent who will probably never thank you the ability to keep their child safe, maybe long enough for their loved one to regain a sense of hope and to choose life.”

Supporters said the measure is needed in a state where the suicide rate is rising faster than elsewhere and would be used only in cases of extreme risk.

Opponents argued the bill violates not only the right to own firearms, but also other constitutional guarantees, such as the right to due legal process, to confront an accuser, and against unreasonable searches and seizures of property.

“Under this bill, a mere accusation can cause a warrant to be signed for the seizure of firearms. Then if the person was deemed not a risk, and the order vacated, they would have to go to court in order to get their property back. That’s an egregious infringement on a basic right,” House Minority Leader Richard Hinch, R-Merrimack, said. “If this bill was really meant to help those at risk of harming themselves, it should go on to include knives, prescription drugs, and so on.”

Rep. Kimberly Rice, R-Hudson, called it an “unconstitutional, gun-grabbing bill” that would “turn due process rights upside down.” Rep. Daryl Abbas, R-Salem, said he also opposed the bill because it would disarm someone without doing anything to address the reason they were a danger to themselves or others.

“The firearm itself is not the motivation behind why this person wants to harm themselves or others this bill ignores that crisis,” he said.

While other states have passed red-flag laws, Republicans in Oklahoma and Kansas, meanwhile, are proposing measures aimed at blocking them.

The New Hampshire bill now goes to the Senate, which, like the House, is controlled by Democrats. But even if it passes, it likely will be vetoed by Republican Gov. Chris Sununu.

“After voting it out of committee with no recommendation and retaining it last year, it is clear the Legislature cannot even come to a consensus on this bill – even 22 Democrats voted against it today,” Sununu spokesman Ben Vihstadt said in an email. “Governor Sununu has long said New Hampshire’s Second Amendment laws are where they need to be and he’s not looking to make any changes.

The bill was among hundreds of bills leftover from last year that lawmakers must act on before moving on to nearly 1,000 new bills filed this session.

The House passed HB 690, which would repeal what Democrats call the “costly work requirement” for Medicaid expansion.

“Passage of this legislation will codify in statute that Granite State families on Medicaid, who may be recovering from and seeking treatment for substance use disorder, raising children and providing care for family members, or furthering their education, are not capriciously denied health care coverage on the basis of onerous reporting requirements,” House Majority Leader, Doug Ley, D-Jaffrey, said in reflecting his approval for the legislation.

“Not even two years ago, the work requirement was the proud accomplishment of a bipartisan agreement that included plenty of reasonable exemptions,” Hinch countered. “The passage of this bill stripping the work requirement from New Hampshire’s Medicaid expansion program is another action taken by Democrats and their allies in the legal community trying to undermine the policy.”

The House approved a pair of bills Wednesday to make medical marijuana available to more patients, but a more expansive bill died in the Senate. Members voted to add insomnia and opioid use disorder to the list of qualifying conditions, though the latter would carry significant restrictions, including a requirement that certifying providers have specialized knowledge in addiction treatment.

An earlier version of one of the bills also sought to add anxiety and Lyme disease to the list, but those provisions were removed.

Meanwhile, the Senate voted Wednesday against making medical marijuana available for any condition for which treatment is determined to be necessary by a provider. The Senate also voted to further study a bill to legalize recreational marijuana, and there are several new bills on that topic coming up later this session.