Federal government bans tobacco sales for those under age 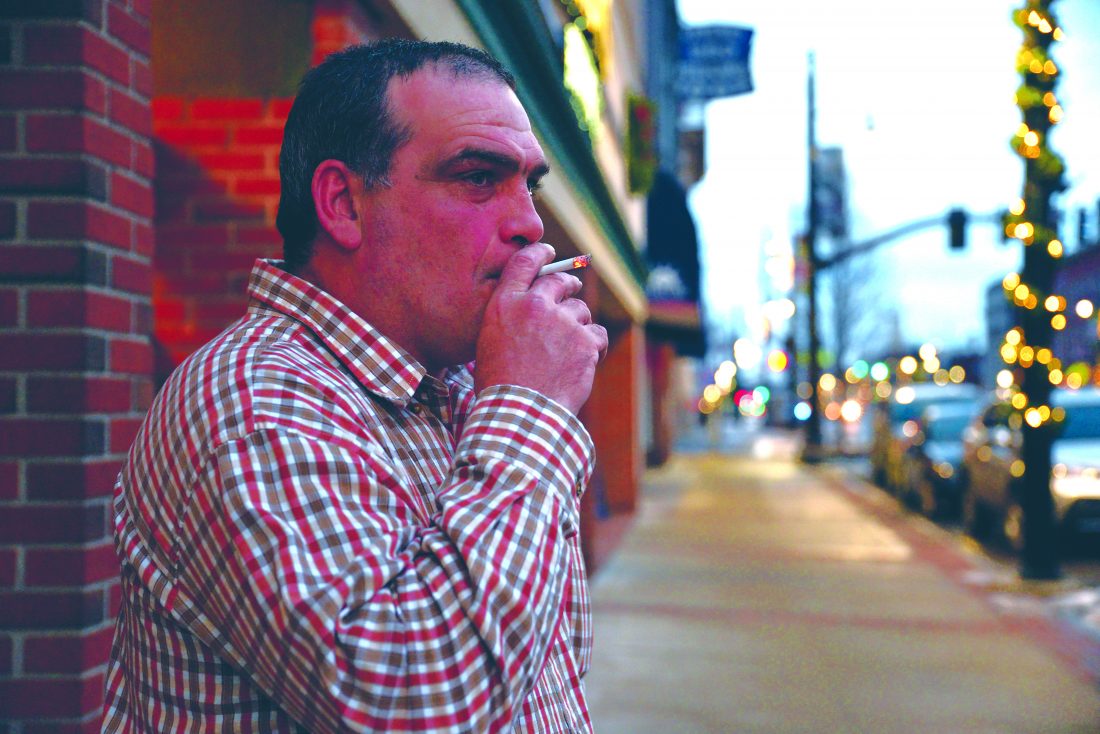 Telegraph photo by ADAM URQUHART John Watt steps out onto the sidewalk after exiting a bar on Nashua’s Main Street on Friday afternoon to smoke a cigarette. A new federal law now makes it illegal for retailers to sell cigarettes, cigars, e-cigarettes and related products to anyone under the age of 21.

NASHUA – “It is now illegal for a retailer to sell any tobacco product – including cigarettes, cigars and e-cigarettes – to anyone under 21.”

So states the message posted on the U.S. Food and Drug Administration’s website, thus beginning a new era of government regulation of nicotine.

On Dec. 17, Congress included the new regulation in an expansive $1.4 trillion spending package intended to avert a government shutdown. President Donald Trump then signed this measure into law on Dec. 20.

Usually, new legislation does not take effect right away. The change simply increased the age limit in existing law, so it was able to go into effect immediately, FDA officials said on Friday.

“Taken together, the government funding bills guarantee that critical priorities – investing in the military, ensuring Americans are more prosperous and healthy, delivering border security, engaging on criminal justice reform, and defending life – will be met in the upcoming year,” Trump said last week after signing the provision into law.

The legal age to buy any of these products is now 21:

• Snuff, dip or chew, such as Skoal or Beech-Nut.

Altria Group is the parent company of Philip Morris, America’s largest tobacco firm and maker of the famous Marlboro cigarettes.

“Altria is committed to being part of the solution. In addition to our long-standing efforts, we’re advocating for legislation to raise the minimum age for all tobacco products to 21. We believe this is the most effective step available to reverse rising underage e-vapor rates,” Altria states on its website.

E-cigarettes are battery-powered devices that typically heat a flavored nicotine solution into an inhalable aerosol. Current federal law prohibits sales of e-cigarettes and all other tobacco products to those under 18. But health officials have called the vaping trend an “epidemic.”

The legislation that banned tobacco sales to those under age 21 also gave Trump a victory on his U.S.-Mexico border fence, as well as a pay increase for U.S. military personnel.

“The legislation preserves my authorities to build the wall on our southern border, and it prevents attempts to slash and cap (Immigration and Customs Enforcement) detention beds, as well as efforts to defund and block my administration’s successful strategies and use of available law enforcement tools, which have produced dramatic reductions in illegal border-crossings,” Trump added.

During the early months of 2019, Nashua leaders and community members debated raising the city’s legal nicotine age to from 18 to 21. The original legislation would have allowed city officials to impose fines of $50 for the first offense and $100 for later offenses.

Finally in May, Board of Aldermen members voted against the age increase ordinance by a count of 7-6.

Also in Nashua this year, nearly 50% of high school students admitted they had at least tried vaping products. According to an academic health class survey conducted during the spring, 22.5% of youth said they had vaped within 30 days.

Meanwhile, some Granite State communities had already taken it upon themselves to increase the legal tobacco age, including Dover, Keene and Newmarket. Some states have also enacted similar laws raising the age to 21, including Massachusetts to the city’s south.

A New Hampshire statute set to take effect Jan. 1 raises the age requirement to purchase nicotine to 19, but this now seems somewhat irrelevant because of the new federal law.