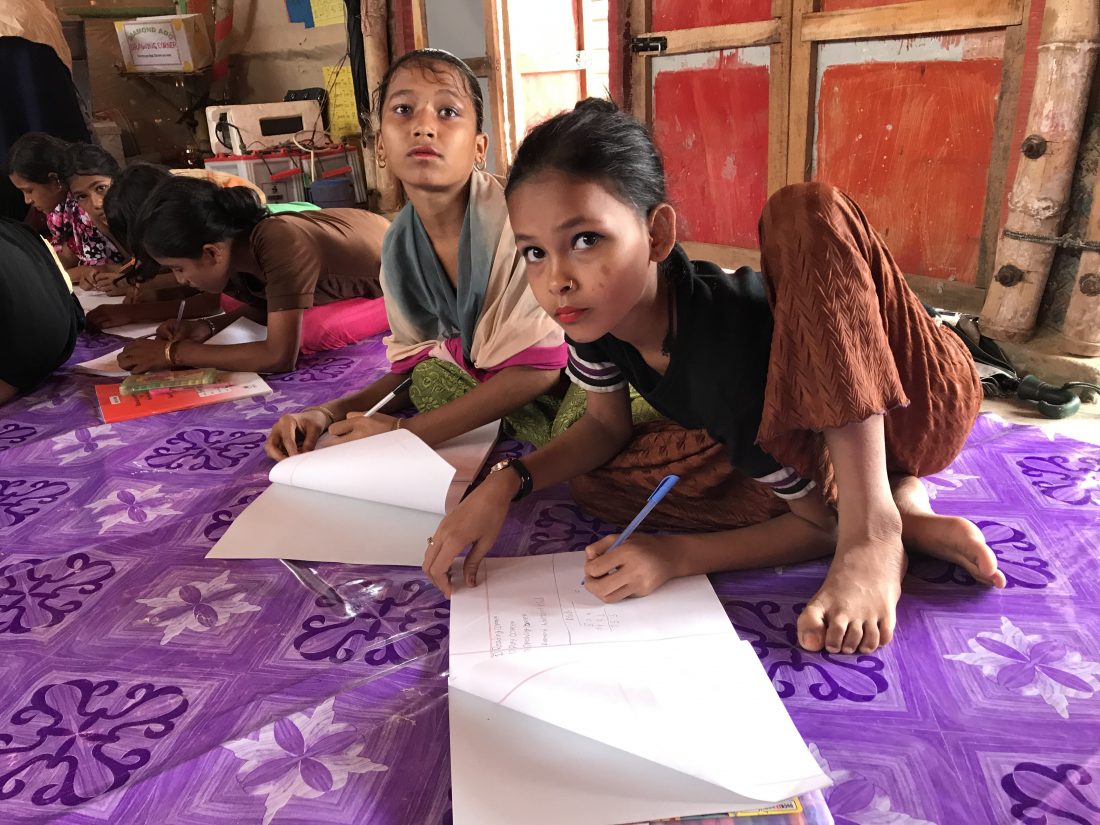 Teenagers attend a class at the Diamond Adolescent Club, run by UNHCR’s local partner, CODEC (Community Development Centre). It is one of 58 learning centres that UNHCR supports across the settlements, providing informal education and life skills, including tailoring, sewing and weaving, for girls and boys separately. ; They don’t have desks or chairs, but in a brightly-decorated bamboo-built room in Kutupalong camp, 30 teenage Rohingya girls, aged 14 and older, sit on the ground writing in exercise books as a maths formula is posted on a blackboard. They are the lucky ones. For cultural reasons, few girls continue their studies once they reach puberty. Even if they did, there are very few learning centres in the Rohingya settlements of south-eastern Bangladesh for children over 14. Nine out of ten adolescents lack access to learning here. For the fortunate, learning centres operate three shifts – giving students a few hours of education per day, learning Burmese, English, maths and life skills. There are plans to introduce Bangladesh Government-approved learning programmes from August 2019 – known as the Guideline for Informal Education Program (GIEP) and comparable to formal school curriculum standards. But there is still no system of recognised qualifications.

NASHUA – Hundreds of thousands of Rohingya Muslims have sought refuge from violence in Southeast Asia in recent years, with some of them making it all the way to Nashua.

Now, even as the United Nations High Commissioner for Refugees argues with the Trump administration about the number of refugees the U.S. will allow into the nation during fiscal year 2020, Nashua Mayor Jim Donchess has signed on for the Gate City to be a resettlement locale for refugees.

“Families and individuals who are displaced from their homes hoping to find a new city or town to raise their children, live and work, need help getting that fresh start,” Donchess said. “Hopefully, Nashua can be a place to make that happen.”

During a September 2018 interview with The Telegraph, Muhammad Mustak said he and his family arrived in the Gate City in 2013 as refugees from violence against the Rohingya people in the nation of Myanmar.

“I feel I am part of Nashua,” Mustak said at the time. “I feel welcome.”

In signing on to attract more refugees, Donchess noted Nashua is already a “Welcoming City,” a result of an 8-7 vote by Board of Aldermen members in September 2016. The city offers a welcoming environment for all persons, regardless of race, ethnicity or place of origin. All people in the Nashua community are valued and embraced as friends and neighbors, the mayor added.

Executive Order 13888, issued by President Donald Trump on Sept. 26, states that refugees will be permitted to resettle in a state or locality once written consent is provided by the governor and a local official. Donchess signed and submitted his written consent to the U.S. Department of State, in accordance with the order.

“State and local governments are best positioned to know the resources and capacities they may or may not have available to devote to sustainable resettlement, which maximizes the likelihood refugees placed in the area will become self-sufficient and free from long-term dependence on public assistance,” Trump stated in his Sept. 26 order.

This comes as the Trump administration is under U.N. scrutiny for planning to limit the total number of admitted refugees to 18,000 in fiscal year 2020.

“Addressing the core problems that drive refugees away from their homes helps more people more rapidly than resettling them in the United States,” Pompeo said.

Pompeo also said that since 1980, the U.S. has welcomed nearly 3.8 million refugees and asylees. He said cutting the FY 2020 number of refugees will allow the nation to, “refocus resources on reducing the current backlog of asylum cases that now encompasses more than an estimated 1 million individuals.”

“At the core of the Trump administration’s foreign policy is a commitment to make decisions based on reality, not wishes, and to drive optimal outcomes based on concrete facts,” Pompeo added. “This year’s determination on refugee admissions does just that, even as we sustain our longstanding commitment to help vulnerable populations and our leadership as the world’s most generous nation.”