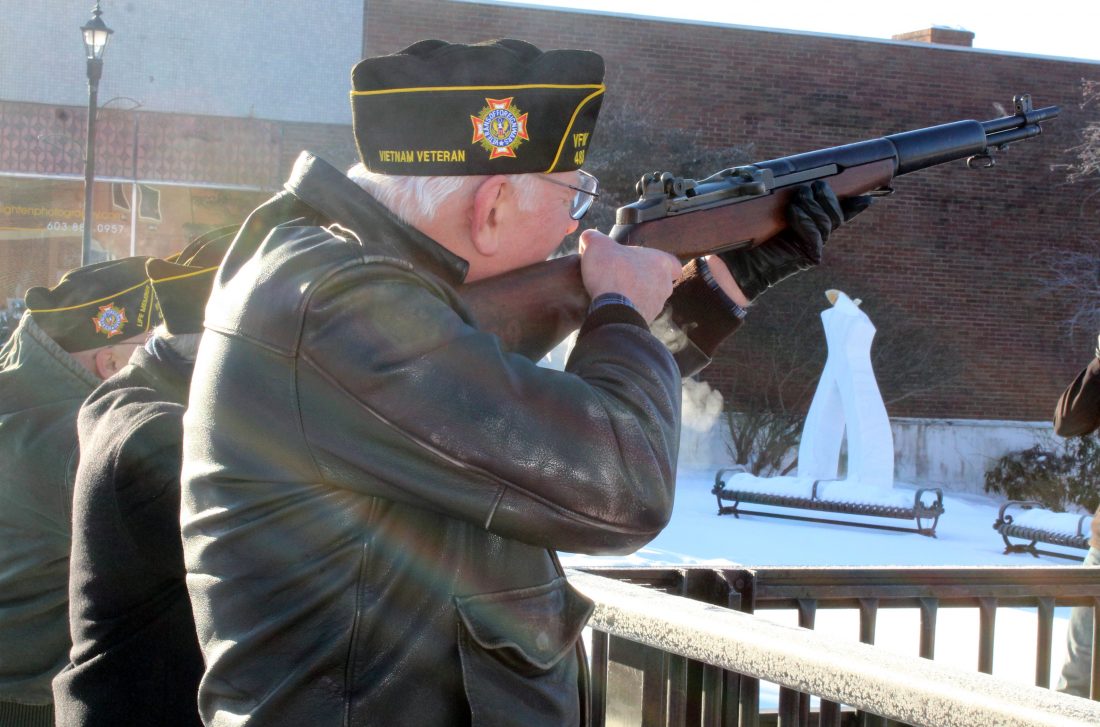 Telegraph photo by DEAN SHALHOUP A Veterans of Foreign Wars firing squad pays tribute to American forces killed and wounded in the attack upon Pearl Harbor during Sunday's annual memorial service at the Main Street Bridge in Nashua.

NASHUA – As he has done for decades worth of Pearl Harbor anniversary observances, World War II veteran Richard Mohrmann stepped forward in the biting Sunday morning chill and took possession, along with Vietnam veteran Herbert Townsend, of a ceremonial wreath and waited for the signal.

The men walked slowly the 15 feet or so to the Main Street Bridge railing, paused momentarily, and then released the wreath onto an ice-covered Nashua River, in a symbolic gesture that memorializes American soldiers and sailors killed in the Japanese attack upon Pearl Harbor some 78 years ago.

Among the speakers was Mayor Jim Donchess, who thanked members of the Mayor’s Veterans Council for again organizing the memorial service, which takes place each year on the Sunday closest to the Dec. 7 anniversary.

“We gather to reflect on the events of Dec. 7, 1941, to honor those who lost their lives that day, and to be reminded of the lasting impact of this time in our nation’s history – how it shaped our past and present, and can shape our future,” Donchess said in addressing participants and onlookers.

As destructive as the Pearl Harbor attack was, Donchess noted, Americans rose up and united as one in a surge of national pride and spirit that carried the nation through not only World War II, but also through subsequent wars and conflicts.

Today, Donchess continued, Americans “still see turmoil around us. … it’s not world War II, but rather political divide,” combined with “mass shootings and the threat of terrorism.”

But Americans’ resolve in times of trouble lends a sense of optimism “as we look to 2020 and beyond,” Donchess said.

“I am confident that … Americans, and Nashuans, will continue to come together and work as a community on a daily basis.

“It’s what makes our country, and our city, so great.”