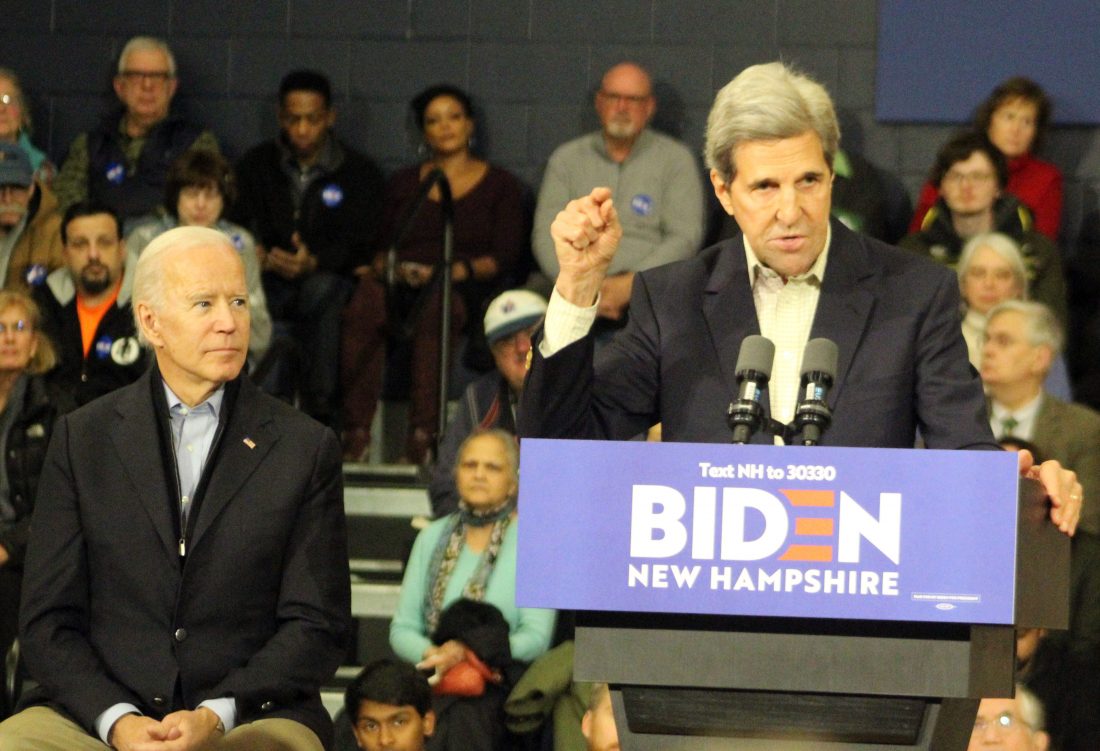 NASHUA – Americans “have a lot of work to do” in the next 11 months leading up to the General Election, Democratic presidential candidate Joe Biden said Sunday in Nashua, noting that if voters agree with him, “we have to restore the soul of America, not only at home but around the world.”

The former vice president took a number of shots at the Trump White House, as did former Secretary of State and fellow Democrat John Kerry, Biden’s traveling companion on Sunday. The two appeared on stage at Nashua Community College in the first of two New Hampshire campaign stops.

Biden and Kerry later made their way to Hampton for a similar event, which took place at The Sports Barn entertainment complex.

Kuster, although acknowledging she has not made her decision yet as to which Democratic primary hopeful she will vote for, noted she was “thrilled to have Joe in New Hampshire” for the two-stop visit.

Biden “will bring respect back to the United States of America,” Kuster added, as Biden and Kerry began making their way to the stage amid a mix of cheers and Bruce Springsteen’s “No Surrender” that filled the college’s Wellness Center.

In a one-on-one interview with The Telegraph after the event, Biden focused largely on his proposed healthcare plan, beginning by clarifying his previous statements that 97 percent of Americans – rather than all Americans – would qualify for coverage.

“The reason I said 97 percent is because the other 3 percent who are qualified don’t sign up,” Biden said. “Everyone is eligible, but not everyone signs up.”

He pointed out that anyone who signs up for public assistance “is automatically signed up for the public option (the Medicare option) under my plan.”

“If someone doesn’t want to be covered, you can’t make them take it, but they are eligible,” he added.

Biden said the reason he is pushing a plan that builds upon the Affordable Care Act – known as Obamacare – rather than a so-called Medicare For All plan some of his Democratic primary rivals are touting, is the latter’s high cost.

Currently, Biden said, roughly 16 million to 17 million Americans are on Medicare, for which, he said, “we’re paying taxes, which we should.”

“But what happens if you suddenly add 270 million people” to the Medicare rolls, he asked rhetorically. “It would require a significant tax increase for everyone, especially the middle class.”

Under his plan, Biden said, “we would take what we’ve already passed (Obamacare programs), restore the cuts the president made, and further subsidize programs already in place.”

Under that proposal, Biden said, Americans would be allowed to choose between keeping their private insurance, such as coverage negotiated by their employer, or “move into Obamacare – which will become ‘Bidencare,'” he said.

His plan, Biden said, also would allow Medicare to negotiate drug prices with the drug companies, a component which he said currently is against the law. That, he said, “would bring down drug prices significantly.”

At the public event, which at roughly 90 minutes ran longer than expected, Kerry began on a lighter note, referencing his own presidential campaign.

“When I came to New Hampshire, people said I looked like the Old Man in the Mountain,” he said referring to the iconic Granite State landmark that collapsed in 2003.

Kerry is a former Massachusetts senator who won the 2004 Democratic presidential primary but lost the General Election to incumbent president George W. Bush. He later served as Secretary of State under President Barack Obama. Kerry’s support is one tool Biden said he hopes will help him not only win the party’s primary, but also defeat Donald Trump, to which Kerry alluded Sunday.

The first step, Kerry said, when answering the question “who can beat (President Trump) starts right here,” he said of New Hampshire voters.

New Hampshire’s first-in-the-nation primary is set for Feb. 11. Historically, how candidates perform in the Granite State can determine the course of the remainder of their campaign.

The 2016 primary set a record voter turnout for New Hampshire, at 550,000 ballots, representing 62 percent of registered voters. For Democrats, Bernie Sanders defeated Hillary Clinton by more than 22 percent in the state’s primary. Trump won the state in a bid for the Republican nomination with 35.3 percent of the popular vote. Trump went on to defeat Clinton in the General Election.

Biden, who preferred walking back and forth on the stage and stepping down now and then rather than standing at a fixed microphone, said Trump “has given oxygen” to “the dividers,” using as an example the so-called “Unite the Right” rally, the racially-charged marches neo-Nazi and white supremacist groups staged in 2017 in Charlottesville, Virginia.

“I heard them chanting that same bile I heard back in the ’60s, during the Civil Rights era, and how it angered me. … I remember the president saying, quote, ‘There are very fine people on both sides.’

“This guy is more George Wallace than he is George Washington,” Biden said to applause.

“The reason I’m running is because of my experience,” he said. “We’ve got a lot of work to do.”