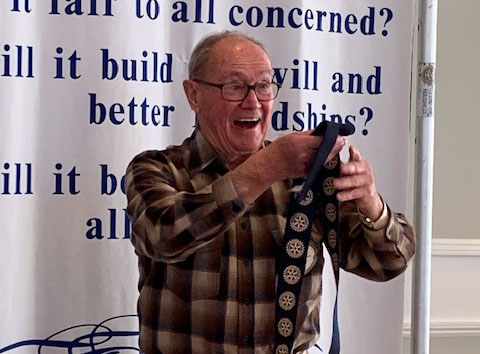 Courtesy photo Davis K. 'Skip' Bryant, longtime Nashua businessman and 48-year Rotary Club of Nashua member, holds up a pair of custom suspenders with the Rotary emblem, one of the gifts he received upon being awarded the club's Lifetime Achievement Award.

“They started reading things about (the recipient), and pretty soon I was thinking, ‘hey, that could be me,'” the ever-gregarious Bryant told me the other day.

When they called his name, was Bryant surprised? “I sure was … I didn’t know anything about it,” he said with a laugh.

Bryant, who Nashuans of a certain age may remember as the proprietor of Main Street camera shop “Bryant’s Photocenter” back in the 60s and 70s – an era when camera sales and film developing stores were almost as prolific as Dunkin’ Donuts shops are today – is an accomplished man whether measured by his quiet deeds or by the numbers.

First, the numbers: 92 years old, retired at 60, Nashua Rotarian for 48 years, club treasurer for 21 of those years, and now just the second recipient of the club’s Lifetime Achievement Award.

And, oh, about those 48 years of membership: Bryant has perfect attendance at meetings for all 48 years.

As for his deeds, president elect Bill Barry sums it up: “He’s done great things on behalf of Nashua Rotary, and Rotary International, for a long time … Skip attends every meeting, is involved with every activity, and still contributes his time and resources,” Barry said.

The Lifetime Achievement Award, Barry said, was instituted several years ago by the club’s board of directors as a way to occasionally recognize a longtime member “who has dedicated a lifetime to Rotary.”

Unlike most such awards, the Lifetime Achievement Award is not given out on a regular basis, reserved instead for members like Bryant – and the first recipient, Dr. Carl Quimby — whose many, and varied, contributions stem from the quiet, behind-the-scenes efforts that may not make headlines, but are vital to the success of any project or campaign the club undertakes.

Quimby, who was presented the first Lifetime Achievement Award in 2017, was chosen in large part for his commitment to the club’s Polio Plus campaign, which is part of Rotary International’s global project to eradicate polio through worldwide, mass vaccination of children.

Barry said Quimby is the “first and only” chairman of the local club’s campaign, having served in that capacity since the campaign’s inception some 35 years ago.

Quimby and Bryant, Barry said, “are very understated individuals who volunteer their time not for personal accolades, but for Rotary locally and internationally.”

Bryant, meanwhile, enjoyed a somewhat varied professional life before his retirement at the enviable age of 60.

While operating Photocenter for the five or six years he owned it, Bryant also ran a framing business out of the shop, he said. Eventually, an associate took over the framing part of the business.

Bryant stitched together “four or five” different professions for the remainder of his working career.

He worked for an accounting firm, and for a time worked at the Greater Nashua Chamber of Commerce.

Bryant breaks into laughter recalling the gift that came along with the Lifetime Achievement Award: A set of custom Rotary-themed suspenders made right here in Nashua.

The set, which features a series of evenly-spaced Rotary emblems on the wide, dark-colored straps, is indeed one-of-a-kind, Barry said.

“Skip is the only person in the world who has Rotary suspenders,” he said with a laugh before waxing metaphorical.

“Like the suspenders he was given, Skip has supported our club for as long as he’s been a member.”

And as outstanding a Rotarian as Bryant has been, Barry added, “he’s an even better person.”

Dean Shalhoup’s column appears Sundays in The Telegraph. He may be reached at 594-1256 or dshalhoup@nashuatelegraph.com.