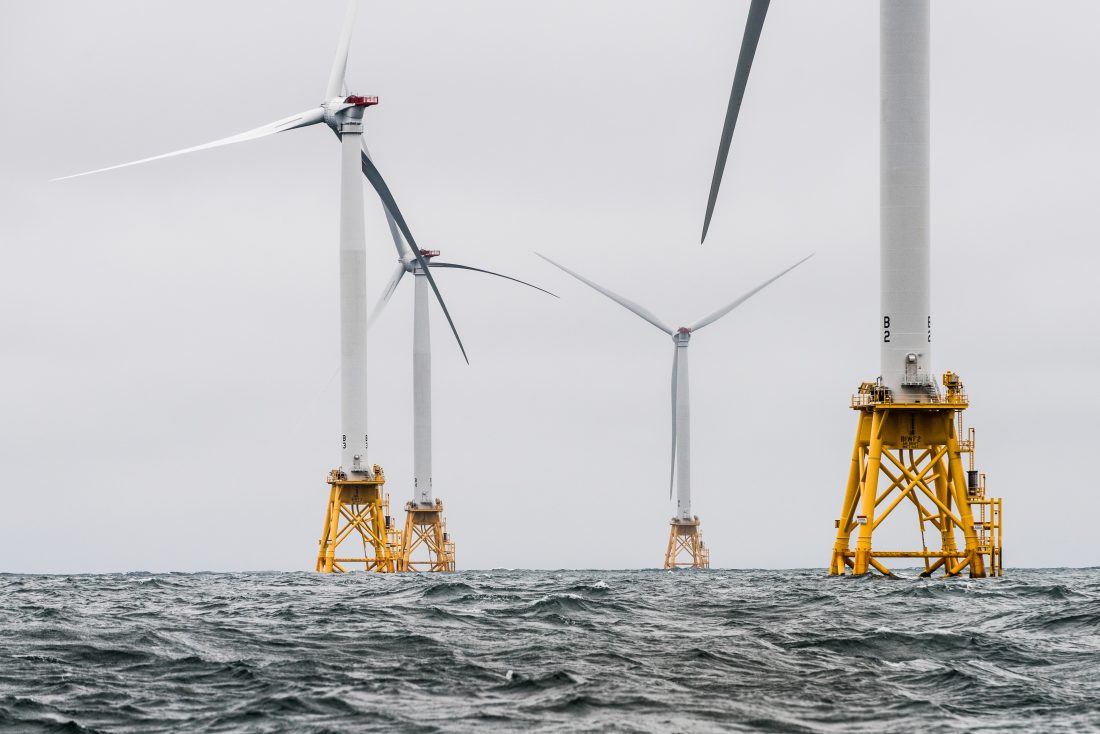 October 1, 2016- The Block Island Wind Farm off the coast of Rhode Island is the first US offshore wind farm. Five Halide 6MW turbines, recently installed by Deepwater Wind, are being commissioned for use. (Photo by Dennis Schroeder / NREL)

Even carbon-heavy coal produced more electricity in New Hampshire than did wind in 2018.

This could change in the new decade, however, as Gov. Chris Sununu has plans for an offshore wind farm.

“New Hampshire has an unprecedented opportunity, as offshore wind in the Gulf of Maine is an abundant source of renewable energy that can be generated at scale,” Sununu stated in the executive order he issued on Tuesday. “New Hampshire is uniquely situated to benefit from this new industry in ways that will attract investment, boost the state’s economy, and create good paying jobs.”

New Hampshire’s Atlantic coastline is quite short compared to those found in Massachusetts and Maine, as the Granite State’s is only about 13 miles in length. Still, Sununu’s executive order states, “the Federal Bureau of Ocean Energy Management (BOEM) has accepted New Hampshire’s request for an offshore renewable energy task force for the Gulf of Maine, in regional partnership with Massachusetts and Maine.”

The first U.S. offshore wind farm is the one at Block Island off the coast of Rhode Island, which entered service three years ago. Originally developed by a company called Deepwater Wind, the project was sold to a Danish firm known as Orsted last year for $510 million.

“We have exciting times ahead of us delivering large-scale clean energy projects to households and businesses along the Eastern Seaboard. Orsted will maintain a strong presence in Massachusetts and Rhode Island and will, of course honor the local commitments associated with Deepwater Wind’s projects along the East Coast,” Orsted North America President Thomas Brostrom said at the time of the deal for the Block Island wind farm.

• The fisheries, endangered species, and environmental impacts advisory board, chaired by the commissioner of the Department of Environmental Services, or designee;

• The workforce, economic development, and supply chain advisory board, chaired by the commissioner of the Department of Business and Economic Affairs, or designee;

• The existing offshore industries advisory board, chaired by the executive director of the Pease Development Authority, or designee; and

• The siting, transmission, and infrastructure advisory board, chaired by the director of the Office of Strategic Initiatives, or designee.

Each board will include five members, representing relevant stakeholders, appointed by the chairperson. All board meetings will be open to the public.

“New Hampshire recognizes the tremendous potential that offshore wind power has to offer,” Sununu said on Tuesday. “With today’s executive order, New Hampshire will ensure that this is an open and transparent process involving diverse stakeholders to balance existing offshore uses with a new source of clean energy. This will require enhanced coordination between state agencies, new studies, and continuous engagement with the public. Most of all, it’s imperative that we go through this process the right way from day one to maximize all the potential benefits of this new industry.”

Furthermore, the executive order directs state leaders at the Office of Strategic Initiatives, the Department of Environmental Services and the Department of Business and Economic Affairs to jointly study and report on:

• How much the potential wind farm could reduce emissions of greenhouse gas emissions; and

These reports will be completed no later than January 2021 and are to be submitted to the governor, speaker of the House, Senate president, Public Utilities Commission and the chairs of the relevant committees of the General Court.